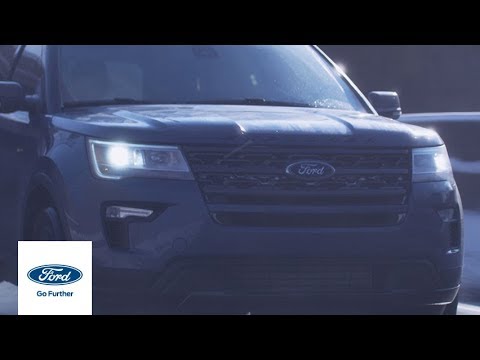 Joann Muller at Forbes, in a piece on Ford Motor Company’s plans vastly to expand its electric and hybrid offerings, puts her finger on something absolutely crucial.

Ford and other American car companies really, really need electric sport utility vehicles in order to get through the coming years. Some electric sports cars wouldn’t hurt, either.

The lack of affordable electric SUVs has been a real drag on the market in the Midwest, where snowy winters make low-riding sedans impractical and families that can afford them want the bigger vehicles. (They would help the earth if they would use public transport, but this column is about real world behavior).

Here’s the issue, as Muller lays it out with crystal clarity. The profit for Ford and other manufacturers is in bigger vehicles. You can build a much bigger profit margin into an SUV or a truck than into a little Ford Focus. And, American consumers want the bigger vehicles for all sorts of reasons and not just snow or mud.

Sports cars also have a huge profit margin, as with Volkswagen’s Porsche.

The problem is that SUVs and sports cars are gasoline hogs. When gasoline prices are low, as they are now, relatively speaking, that isn’t a big problem. But when they go up substantially, as they did earlier in this decade, it kills SUV and muscle car sales.

In the primary commodities business, whether oil or coffee or iron, prices are typically a roller coaster ride of peaks and crashes. That is why there are often attempts to form cartels in those sectors, as with OPEC, which hope to smooth out the up and down prices (which make it hard to plan and can lead to bankruptcy at low points). The way it works is that usually primary commodities are produced both by companies with low extraction costs and by companies with high overhead. For natural reasons, Saudi Arabia can get a barrel of oil out of the ground and onto a supertanker for about $2 a pop. But if you dig in the North Sea it might cost you $40 a barrel to get the oil out. So when the prices are low, only the companies with low extraction costs can make a profit, but then that reduces supply over time. Assuming demand stays stable or rises, prices will then go back up and the marginal producers will come back on line. But then that process will increase supply and a glut ensues, sending the prices back down sharply. 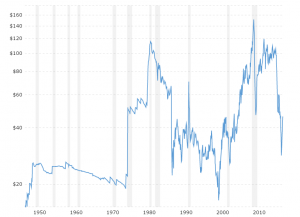 Crude Oil Prices during the past 70 years h/t MacroTrends

So what Ford execs are telling Forbes is that they know we are in a gasoline price trough right now, and that they know it is highly unlikely to last. Another big run-up of prices is around the corner. (More especially since demand from growing economies such as China and India could well grow significantly as people abandon bicycles for motorcycles and automobiles).

When the price of gasoline goes back up, demand for SUVs and Mustangs will plummet, and Ford will be in trouble.

But there is an escape hatch for Ford and other American automobile manufacturers.

Renewable electricity is the future, and it is highly deflationary because the fuel is free. Renewables now account for 18% of American electricity generation and for the bulk of *new* installations. In Iowa, wind alone will make 40% of the state’s electricity by 2020.

So as we go, over the next decade and a half, to a grid largely powered by renewables, we will escape the roller coaster ride of oil and gas prices and electricity will get cheaper and more reliable. In fact, some towns in Texas are opting for wind power because the utility can tell you the cost of wind for 25 years out (after installation and maintenance, basically 0). No one can tell you the cost of fossil fuels even 5 years out.

Utilities are waking up to the renewables revolution, which will happen long before anybody expects it, and, as Quartz reports, are now actively promoting the idea of electric vehicles, since EVs will be crucial to their own profit margins. They will have to slightly shift their business model, charging not for the cost of fuel to generate electricity but for the cost of construction, maintenance and distribution of wind and solar facilities. EVs will be what they have going for them with regard to growth. And electric SUVs will be even better for their bottom line.

So, an electric SUV like the 2020 Ford Mach 1 or an electric Mustang won’t be vulnerable to consumer fickleness and Ford can count on steady sales year after year, escaping a major challenge to its business model.

And when the future of multi-billion-dollar American corporations depends on something, they will make it happen. Automobile companies used to do sweetheart deals in back rooms with Big Oil. They were an obstacle to the growth of green energy.

But if Ford switches around and takes a stand that is earth- and climate-friendly, that is a bright ray of hope for the future of the planet.