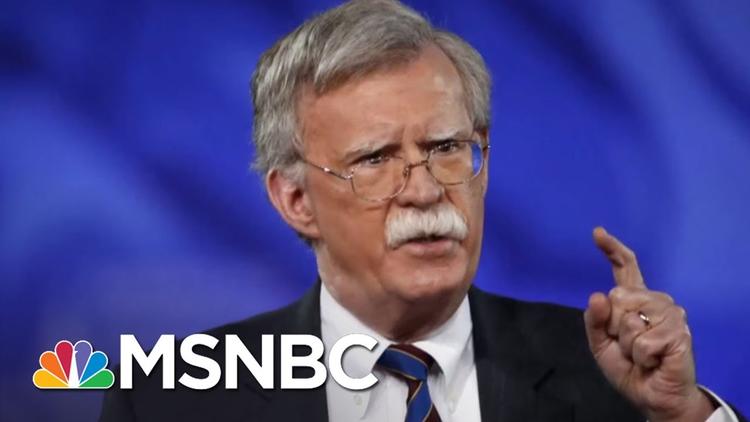 The president once distanced himself from the Bush legacy. Now he’s brought back the architects of its darkest moments.

Political reporters have a saying: There’s always a tweet.

That is, for nearly every political moment or presidential decree, there’s an uncannily on-point comment buried somewhere in the presidential Twitter feed. Often it features the president expressing a past view that’s diametrically opposed to whatever he’s doing now.

Here’s an example from 2013: “All former Bush administration officials should have zero standing on Syria,” Donald J. Trump tweeted. “Iraq was a waste of blood & treasure.”

According to Brown University and the Institute for Policy Studies, Americans spend $32 million every single hour on wars started in the Bush era. Thousands of U.S. troops are dead, while credible estimates put the number of dead in the Middle East at upwards of a million. Byproducts included a shocking torture scandal that eviscerated U.S. standing abroad.

Fast forward to 2018 — year two of “making America great again” after all that — and what do we find?

Trump has tapped John Bolton, perhaps the most ferocious war hawk from the Bush years, to be his National Security Adviser. There he’ll enjoy top standing on Syria, along with Iran, Iraq, North Korea, and any other part of the planet he elects to immiserate.

Trump most likely knows Bolton from Fox News, where the mustachioed chicken hawk appears regularly to drop rhetorical bombs in support of dropping literal bombs. Lately Bolton has been a loud advocate of pulling out of the Iran nuclear deal, scuttling talks with North Korea, and then bombing both countries.

In the George W. Bush administration, Bolton did a lot more than talk.

He twisted arms at the UN trying to oust arms control diplomats like Jose Bustani and Mohamed elBaradei, who (correctly) cast doubt on the administration’s false claims that Iraq had weapons of mass destruction.

Bolton also persuaded the White House to walk away from a deal that had frozen North Korea’s nuclear program for eight years. “It was,” a New York Times editorial put it delicately, “the sort of simplistic and wrongheaded position he takes on most policies.”

Back in the White House, Bolton could reprise both roles.

He’ll almost certainly lean on Trump to cancel the hard-won Iran deal, just as he bulldozed diplomatic impediments to the Iraq War. And he’ll arrive on the cusp of a historic possible meeting between Trump and North Korean leader Kim Jung Un — bad news for anyone who hopes those talks lower tensions.

Trump is also elevating torture enthusiast Mike Pompeo to lead the State Department. And he’s picked Gina Haspel, who ran a CIA torture chamber in Thailand and then destroyed the evidence, to head the CIA.

Once upon a time, Trump seemed to issue a blanket ban on the Bush legacy. Now he’s brought back the architects of its darkest moments.

Moments for which you and I shelled out $32 million in the time it took me to write this piece — while countless others cowered under bombs.

Ideally, Congress will reassert its powers over war and peace before more “blood and treasure” are shed. If not, the only check left on Trump’s worst impulses will be his own old tweets.