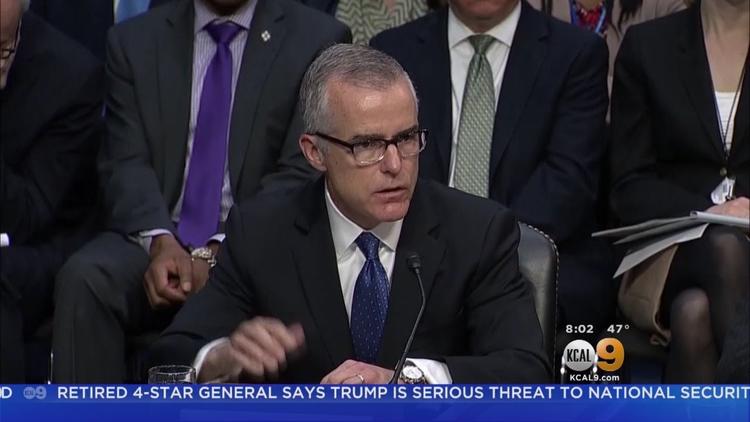 Trump’s conviction that being president means never having to say you are sorry, and being able to do whatever the hell you please, is likely to cause him legal trouble sooner or later.

His vindictive firing of deputy FBI director Andrew McCabe, just before McCabe could retire and qualify for his pension, is typical of this president. McCabe appears to have been passing on memos on his interactions with Trump to Special Counsel Robert Mueller, and the firing may be related to these memos.

Trump is attempting to humiliate and discredit McCabe because he is a corroborating witness for James Comey, the FBI director whom Trump also fired last May. The Comey firing is far more serious, since it may constitute obstruction of justice.

Trump’s lawyer, John Dowd, more or less corroborated the political motive for firing McCabe in this mortifying way, by saying that it should form a precedent for firing Special Councel Robert Mueller, who Dowd implied was part of the same corrupt partisan gang irrationally hounding the president over the fake news Russia collusion story.

If Trump fired Mueller, that really would be obstruction, and could create a huge constitutional crisis of a sort not seen since the days of Reagan’s Iran-Contra or Nixon’s Watergate.

And unfortunately for Trump, the revelation that Cambridge Analytica, the data mining firm founded by his backer and part-time neo-fascist billionaire James Mercer, illicitly used 50 million voter profiles from Facebook Trump’s behalf, and that CA met with the Russians, kind of reduced the supposed fakeness of the story. Mercer was also behind building up white supremacist rag Breitbart, and appears, despite denials, to have been close to Steve Bannon, who was a vice president at Cambridge Analytica and the editor of Breitbart. Bannon, for a while White House chief strategist, has recently been in Europe urging French fascists to own their racism and boast of it, and praising Italian dictator Benito Mussolini, whose troops killed or wounded 300,000 American and British soldiers. That is what Trumpism, which Bannon championed, stands for.

Trump admitted in his interminable tweets that he got rid of the FBI director to stop the Russia collusion probe. Comey has also alleged that Trump attempted to obstruct the investigation of former National Security Adviser Michael Flynn over his undeclared and likely illegal contacts with Russia and Turkey.

If Mueller works up an obstruction case against Trump over the Comey firing, then it is possible that the McCabe firing could be seen as an action in furtherance of the original obstruction.

Trump also sees McCabe as a Democratic mole because his wife Jill ran unsuccessfully for office in Virginia in that party. Vox says Trump once asked McCabe to ask his wife how it felt to be a loser.

Apparently Trump is the only one in Washington who has never heard of the power couple James Carville and Mary Matalin (the former a Democratic strategist, the latter a Republican one). You don’t judge someone on ascriptive grounds (their inherited or family or other involuntary identity) but on those of actual personal behavior.

But then Trump’s entire life and his movement are based on judging people on ascriptive grounds rather than by the demonstrated content of their character. Perhaps he is blind to character because he has none of his own.

Trump knows that the FBI and special counsel Robert Mueller are coming for him over his many crimes, political and financial, and he is hoping to muddy the waters by creating a reputation for the FBI as corrupt and partisan, thus undermining public confidence in its finding.

Incidentally, one of the things Trump blamed McCabe for was letting James Comey fly back from LA to Washington on an FBI plane *after* Trump had fired him while he was in the field. Apparently Trump had wanted Comey to be forced to hitchhike home.

The petty-minded disgracing of his enemies speaks poorly of Trump. But if Dowd’s memo to CNN was a trial balloon for the firing of Mueller, we could pass beyond the realm of the petty to a huge societal explosion.