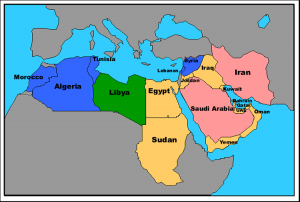 The Sunni-Shi’a schism provides for different narrative and prescriptions for arriving at the ‘utopian Islamic society’ and the incoming of the Messiah, al-Mahdi. The theological, doctrinal and jurisprudential differences between the two main branches of Islam has translated into two different visions on the role of the clerics, the ‘Ulema, in religious and political arenas. Overall, the Shi’a ‘Ulema are better positioned to act as the custodian of the (Islamic) state in the name of the people. The hierarchical Shi’a version of the Sharia bestows its highest ranking ‘Ulema, the Ayatollahs, with religious (and political) authority in charge of the state. The Ayatollah’s counterparts in the Sunni tradition, the Muftis, on the other hand, are limited in playing such a role. For example, The

It is puzzling as to why intelligent people in the media and those in charge of the US foreign policy persistently ignore the need to pay close attention to the underlying ‘context’ in which events take place; to remain cognizant of socioeconomic, political, cultural, historical, and the international contexts in explaining human interactions and events in varying settings. This is something any of my undergraduates is expected to do.

Whatever the motivation behind such disregard and/or ignorance, there are important tailing consequences. The late Edward Said told of the “Orientalism’ disease that poisoned the mind of both the intellectual and the common observers of Middle Eastern peoples and societies: Designated as ‘the other,’ the Oriental people are marred with peculiar and traditional sociocultural values, setting them apart from the ‘rational’ Occidental mind, and are resistant to modernity and political democracy. The cultural essentialists, thus, claimed that Islam, traditionalism, and tribalism are central variables in explaining the prevalence of what is indeed structural. As such, historical colonialism and imperialism and persistent external covert and overt interventions in the Middle East and Northern African region (MENA) were largely ignored, downplayed, or justified. Political authoritarianism and social stagnation ‘must have been’ endemic to the Arab World, if less so in the westernizing Turkey and Iran.

The Sunni or the Shi’a understanding of the ‘proper’ social, theological/jurisprudential, and political framework promoting Islamic governance differ, but such disagreements cannot be understood outside its broader and prevalent national and international contexts. The last wave of Islamic revivalism of the late 1800s, for example, occurred when both the Ottoman and the Safavids dynasties were at the mercy of their European colonial powers and the existing socioeconomic and political environment were marred with severe levels of underdevelopment and poor governance. The mushrooming ‘Islamic’ question for revivalists and reformers like Jamal al-din al-Afghani or Muhammad Abdu or Muhammad Iqbal was, then, over the discovery of an ‘Islamic path’ to recovery in light of humiliation in the hands of the Christian West and the corrupt, incompetent rulers within. The burgeoning inquiry was over the question of effective (Islamic) governance and not the Sunni-Shi’a divide per se. This wave of Islamic movement differed from, for example, the al-Khawarij movement in the early Islam that reflected the turbulent years of civil war in the Islamic community over the question of succession and the legitimacy to rule in the years after the death of the Prophet Muhammad (632—661AD). The political and social dissension and divide between the political elite in Damascus and the religious and spiritual leadership in Mecca and al-Najaf in Iraq had caused a political and religious gulf between a heretical vision the political and military leadership in Damascus and the opposition who demanded their share in the distribution of wealth and political power (later-known as the Shiite, or partisans of Ali–those followers of the bloodline heirs to the prophet Muhammad, led by Ali ibn Abi Talib).

The ongoing propagated Sunni-Shi’a divide narrative proposes the sectarian divide as the cause of both national and inter-state problems in the region. The Sunni-Shi’a divide has been a dominant theme in explanation of events in the MENA region since the Iranian Revolution, including the ‘root cause of the revolution—as a Shi’a-Islamic-revolution–to the Iraqi (Sunni-Arab dominated) invasion of a revolutionary (Shi’a) Iran, to the historical and modern sectarian divide causing conflict and war and underdevelopment in Iraq, Lebanon, Syria and Yemen, to the (Sunni) Saudi and (Shia) Iranian rivalry in the Persian Gulf region over a Sunni or a Shi’a alternative and vision for the future of Islam and Muslim societies. However, the root cause of the ‘constructed Sunni-Shia conflict’ in Libya, Syria, Yemen, Iraq, Tunisia, Egypt, Sudan, Somalia, and Bahrain and other members of the Arab League, rests with poor governance, including the presence of illegitimate, authoritarian states. Sectarian mobilization and counter-mobilization is only a manifestation of the larger contest over political power and socioeconomic resources; in other words, it is over the control of the state and matters of governance.

The State and Governance

It is only natural to think of national governments once the question of governance arises. After all, national governments are endowed with tremendous power, legitimate or not, and resources to govern over matters of significance to the population, including law and order, national security, social and economic development, and the preservation of cultural heritage and overall social harmony.

Democracy is not about culture, religion, or religious sectarianism per se, but the management of political power and the competition over socioeconomic resources within agreed-upon normative principles and values and institutional arrangements, whereby individual citizens through elections and other forms of political participation determine their own choices through elected representatives. In other words, political democracy is (can be) an instrumental method in the resolution of ‘identity conflicts’ over cultural and nationalistic issues by providing legal and institutional venues for resolution of differences and conflicts to groups in competition over socioeconomic resources and political power. The competition among cultural groups in a given society is not so much about the superiority or inferiority of certain value system or way of life per se; e.g., designation of one’s identity as Sunni or Shi’a, but how the competition translates into control over local, regional and national resources while realizing the ambitions and aspirations of all cultural groups. This is especially true, where legal and institutional venues for dispute settlement and conflict resolution and power sharing among competing cultural groups are weak or are seriously lacking. In such cases, it becomes ‘natural’ for a dominant culture try imposing its ethos and belief systems, through cooperation or coercion, on minority groups, monopolizing control over socioeconomic resources and political power.

The inadequacies of the state and its institutions and bureaucracy and the presence of weak and divided society have been a prominent problem in the Arab MENA region. The state authoritarian rule and traditional value systems and institutions still pose serious challenges before Arab societies striving for democratic rule and social justice. The opposition in Arab countries also has failed to mobilize the populace around a common ideology to challenge the state. Instead, the state has manipulated ethnoreligious divisions to further divide and paralyze the opposition. Civil society in the Arab World remains underdeveloped. As

“Corruption is the antithesis of good governance; it undermines the conditions that favor peace: economic development, stable governing institutions, and social trust. (p. 130), and nothing does more to erode public trust and the legitimacy of government than public officials abusing their authority for illicit gain. Economic growth is dependent upon policies that protect and support free markets, but markets flourish best in governance systems that promote equality of access, provide social safety nets, enhance human capital, respond effectively to market failures and guard against exploitation and abuse (p. 193).On the other hand, As Marwan Bishara in ‘

The state of The State in the Arab World is in turmoil. The rise of the so-called ‘the Islamic State in Iraq and Syria (al-Sham)’ or the ISIL—the Daesh in Arabic—was (is) fundamentally the result of both the poverty of Arab Politics and the failure of the Islamic clerical leadership in formulating and institutionalizing the mechanics necessary for modern governance. This failure is more pronounced in the Sunni Arab countries. Arab politics experimentation with Ba’athism, Pan-Arabism, secular nationalism, and monarchism have all failed, paving the way for Islamic movements, mostly colored with radical solutions to empower society and to thwart foreign influence. Although some Arab states have done better than others in the promotion of socioeconomic change, they all have fallen short in the political arena. The failure of the Arab Spring movements since 2011 only testifies to the entrenched power of Arab political elites and their foreign supporters, who have thus far played the sectarian card and the ‘war on terrorism’ mantra to secure regime survival and maintaining the status quo.

The Shi’a clerics’ takeover of the state in Iran since the 1979 revolution has allowed them the opportunity to formulate, institutionalize, and practice an ‘Islamic Republicanism,’ with many successes and failures, but at least avoiding violent dissident religious movements. The simultaneous competition and cooperation between the religious and political establishment has resulted in tangible settlements or still evolving, of some seemingly ‘intractable’ issues involving Islam and the operation of modern society, economy, and polity. As

The contemporary Sunni-Shi’a schism dates back to the 1979 Iranian Revolution. Iran’s foreign policy prior to, and since the revolution, has been driven, for the most part, by pragmatism; the sectarian card is played as a reaction to the rise of militant Sunni movements in Afghanistan, Pakistan, and the greater Arab world, to protect the new revolutionary state and its ethos. Recall, that Iran before the revolution and unlike Egypt, Jordan, Saudi Arabia, or Pakistan lacked any serious religious movement or religious political parties challenging the state, and it resembled more like its neighboring Turkey in its secular political orientation. Yet, the first 20th Century ‘Islamic’ revolution in the (Shi’a) Iran implied that Islam is indeed a potent sociopolitical contender in governance. The seizure of the Grand Mosque in Saudi Arabia in 1979 crystalized the threat of an ‘Islamic challenge’ in the Arab world that diverted a great deal of wasted Saudi national treasure to thwart a ‘Shi’a threat’ and promoting militant Salafism in Pakistan, Afghanistan, and beyond, whilst protecting the prevailing sociopolitical and economic status quo. Hitherto, the sectarian card became currency in the ‘constructed debate’ over not so much the deficiencies of good governance but over the supposed threat of all Islamic movements as a terrorist menace to societies everywhere! Iran’s policy in support of national sovereignty and integrity of Iraq, Lebanon, Syria, and Yemen falls in line with its support of empowering the historically suppressed Shi’a political and religious establishments in Iraq and Lebanon, whilst its support for Syrian government and the Houthis in Yemen, though a limited one, eyes countering the United States’ and its allies’ hostilities and their not-so-secret push for regime change in Tehran.

Ali R. Abootalebi is Professor of Middle Eastern and Global Politics in the Department of Political Science, University of Wisconsin, Eau Claire (UWEC). He is the author of Islam and democracy: State-Society Relations in Developing Countries, 1980-1994 (Garland, 2000), and, coauthored with Stephen Hill, Introduction to World Politics: Prospects and Challenges for the United States, 2nd ed. (Kendall Hunt, 2018) and numerous articles on Iran, Arab Politics, Civil Society and Democracy and U.S. foreign policy.