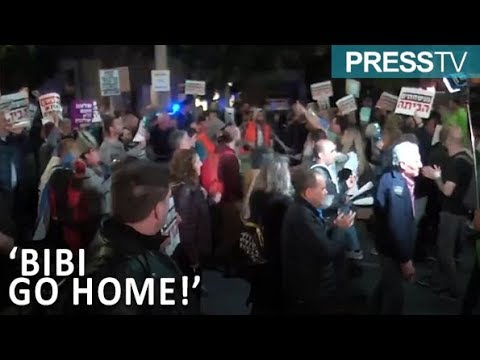 Far right Israeli prime minister Binyamin Netanyahu will meet Monday with far right white nationalist president Donald J. Trump in an apparent effort to hurry up Trump’s announcement of the “Deal of the Century” between Israel and the Palestinians.

The Arabic press is speculating that Netanyahu, who has faced large anti-corruption rallies at home and whose government may fall over his possible indictment on corruption charges, wants Trump to try to save his political career by making a splash over the Deal of the Century.

If so, it is a forlorn hope, since there is no deal to be had under Trump/Netanyahu terms.

The Palestinian-Israeli “Peace Process” is a charade that has the following sociological and political functions:

1. It provides a fig leaf to the Israeli far right as it daily steals more and more Palestinian land in the West Bank and continues to brutalize the civilian population of Gaza.

2. It allows the US government, which coddles Israeli expansionism on the West Bank, to have a form of deniability over Israeli colonialism and Apartheid, or at least something to tell reporters at press conferences, saying that all the disputes will be resolved in final status negotiations. This is like putting two people at a table with two big pieces of German chocolate cake, having one person dig in with a fork and gobble up not only his own share but begin attacking the other person’s plate as well, while the other dinner guest is tied to his chair with his arms behind his back. And then saying, don’t worry, in a few decades we’ll untie the second person and figure out how to get him back some of his now-disappeared piece of cake.

3. The “peace process” hopes to pacify the Palestinian population, which has been divided up into cantons on the West Bank and intensively policed by jackbooted Israeli troops and is increasingly encroached upon by armed, fanatical, supremacist Israeli squatters on Palestinian land. By continually reassuring this beleaguered and long-suffering population that their Apartheid occupation is temporary and there is hope for a state in the future, US and Israeli officials hope to tamp down the militancy that might ensue if Palestinians lost all hope.

4. It allows the Israeli and US governments to blame the victims, since Palestinians who point out that there is no peace process and the entire operation is a sham can be sidelined publicly as obstructionists and even terrorists.

5. It creates a corrupt Palestinian professional bureaucratic class that lives off the crumbs of the “peace process,” essentially acting as collaborators in helping police the Palestinian population for the Israelis and reassuring them about the future. This bureaucratic class receives substantial European, Arab and even US aid and its representatives can be trotted out as the face of the Palestinians, when in fact almost all Palestinians are invested in resisting Israeli expansionism.

Trump’s harsh rhetoric toward the Palestinians has ripped away some of the facade of the “peace process.” His announcement of a move of the US embassy to Jerusalem is a way of signalling that East Jerusalem will never be the capital of a Palestinian state and that there never will be a Palestinian state.

Trump’s angry reply, that he will cut off aid to the Palestinian Authority if Abbas defies him, threatens to decimate the Palestinian bureaucratic class that lives off the “peace process.” But without them, the full catastrophe facing the 4.5 million Palestinians living under Israeli military occupation or permanent Israeli blockade will become abundantly clear to that population, leading to substantial unrest.

Netanyahu hopes that Trump will go even further, and simply put the weight of the US government toward full Apartheid and accelerated Israeli squatting, bestowing Washington’s seal of approval on current Israeli policies and so making it harder for the boycott, sanctions and divestment movement in Europe to become ensconced as general European Union policy (about a third of Israel’s trade is with Europe and it receives substantial technology and weapons transfers from that quarter, which are all endangered if BDS spreads there).

That is the so-called “Deal of the Century,” which would whitewash Netanyahu’s fascist expansionism in occupied Palestine, and which he hopes in vain might give him back his political standing in his own cabinet.

It is a desperate ploy and the entire enterprise is likely doomed in the medium to long term, though the rest of us will suffer a substantial degradation in our quality of life and our basic human rights as a result of this desperate quest to prop up the world’s last colonial mini-empire.