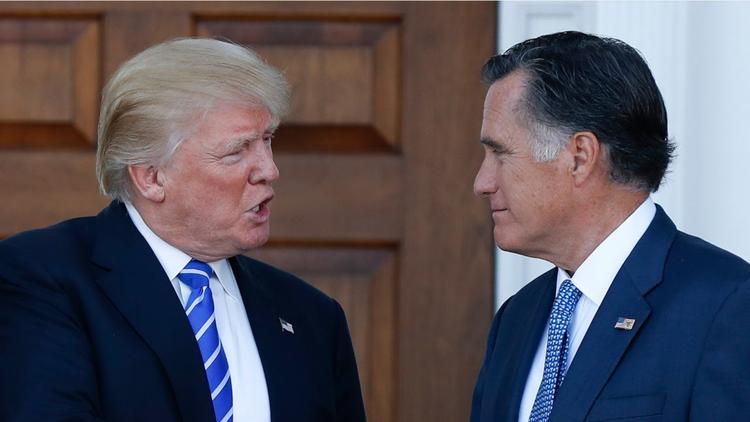 The New Yorker reports that there was a further Steele memo, prepared by the same ex-MI6 intelligence officer who authored the notorious “golden shower” dossier, which reported Russian foreign ministry boasts that they had blocked Trump from appointing Mitt Romney as secretary of state.

Romney had been a fierce critic of Russia in his 2012 presidential bid. If the story is true, that stance, rather than his bashing of Trump himself, led to his sidelining as a candidate for the secretary of state position. We all remember the creepy picture of the dinner Trump and Romney had when the latter was under consideration, with Trump looking like the cat that just ate ten mice.

The point man on this sabotaging of Romney would have been Russian Foreign Minister Sergei Lavrov. Russia appears to have some sort of hold over Trump, possibly “kompromat” or compromising videos or other material.

The man who got the job, Rex Tillerson, is the former head of Exxon-Mobile. He had been involved in a proposed $500 bn. oil and gas deal with Russia before President Barack Obama slapped sanctions on the Russian Federation over the unilateral reclaiming of Crimea from Ukraine. Vladimir Putin and Lavrov may have lobbied against Romney and for Tillerson on the theory that Tillerson would have an interest in squelching the sanctions and reanimating the huge ExxonMobile deal, which would help the Russian economy. Tillerson had also had a personal investment jointly with a company working in Russia.

Russia may have gotten its way (it is only an allegation) on Tillerson, but he went on to disappoint Saudi Arabia and the United Arab Emirates because he did not approve of their June 5, 2017 attempt to take over little Qatar, the Gulf gas giant. In the wake of that crisis, Qatar offered to increase its gas production by a third, and it is expected that ExxonMobile among others will profit handsomely.

Then the BBC says it has received copies of hacked emails from US businessman Elliott Broidy, whose weapons firm has contracts worth hundreds of millions of dollars with the United Arab Emirates. The emails reveal that Broidy told Trump to drop Secretary of State Rex Tillerson last fall, apparently over Tillerson’s refusal to help gang up on Qatar on behalf of Saudi Arabia and the Emirates.

He called Tillerson a “tower of Jello”

Just raising a question, but wouldn’t this sort of lobbying of the president on behalf of a foreign power require Broidy to register under the Foreign Agents Registration Act?

Broidy also, the emails show, lobbied Jared Kushner against Qatar, but Kushner, who had sought financing for one of his troubled Manhattan properties from a Qatari investor last year this time, appears to have remained noncommittal.

Although Broidy was representing UAE interests, especially those of Abu Dhabi Crown Prince Mohammed Bin Zayed (whom Broidy urged Trump to meet), he is also known as a backer of far right wing Israeli prime minister Binyamin Netanyahu, and may have in part been lobbying against Tillerson for the latter.

So it turns out that not only Kushner himself but the office of the secretary of state has been the site of a vicious international struggle between the UAE and Russia.

The Israel lobbies have often vetoed foreign policy appointees whom they felt to be less than sycophantic toward Tel Aviv, so this sort of thing is not entirely new. But I think the Russia-UAE maneuvering, if the reports are true, is unprecedented.