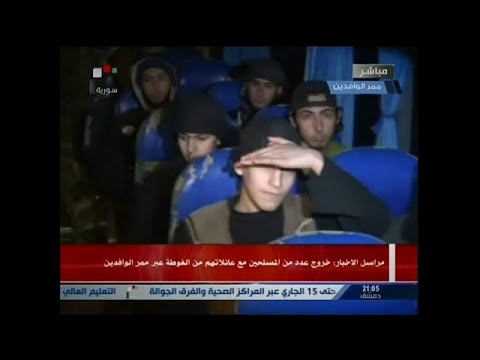 The Syrian War is largely over, but the regime of Bashar al-Assad and his Russian and Iranian backers appear determined to mop up the remaining enclaves of rebel opposition, despite sweet talk of de-confliction zones and of negotiations in Sochi or Astana. It would be better at this point to come to a political settlement, since the regime has won but is still weak in many areas, and a compromise is not impossible.

Instead, Damascus is making a drive for the complete restoration of the power of the one-party Baath government, with all its fearsome police state tactics of torture and prison killings on a large scale.

Al Jazeera is reporting a sudden departure of opposition rebels from the East Ghouta enclave near Damascus on Friday night. The Saudi-backed Army of Islam (Jaysh al-Islam) fundamentalist militia in East Ghouta appears to have been holding captives from a rival militia, the Syrian Conquest Front (formerly Nusra Front, with alleged al-Qaeda links). The Army of Islam released its captives so that they could leave for Idlib.

The move comes amid an intensification of the assault on the enclave by the government of Bashar al-Assad in cooperation with Russian Aerospace Forces, which have intensively bombed it in recent weeks. Humanitarian organizations have decried the deaths in this bombings of nearly 1,000 persons, many of them civilians and children. International law forbids deliberate targeting of civilian sites or reckless disregard of civilian welfare during a military campaign.

The first batch of some 13 fighters from the Syrian Conquest Front were permitted to leave East Ghouta early Saturday and to make their way to the northern province of Idlib.

Meanwhile, the Syrian Arab Army, led by the Fourth Mechanized Division, has taken several city blocks in the Harasta suburb of East Ghouta away from fundamentalist militias. It appears to be attempting to cut a highway key to supplying the rebels.

One of the foremost military commanders of the Brigade of the All-Merciful was killed Friday, which the group acknowledged.