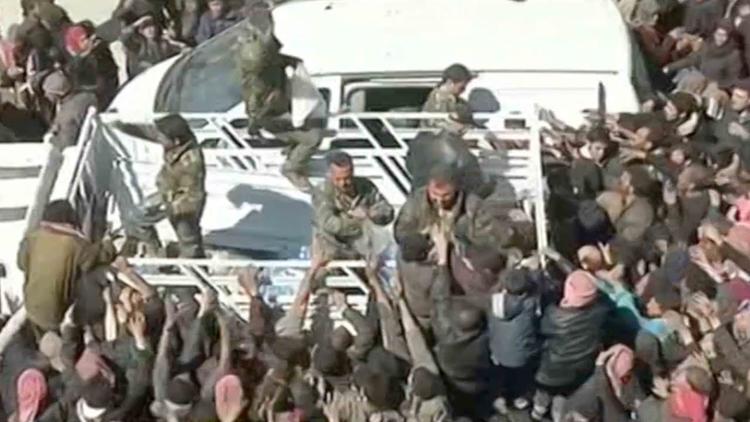 Thousands of civilians fled the southern pocket of the East Ghouta suburb of Damascus on Thursday and Friday and Saturday, carrying what few belongings they could with them. The rate seems to have been about 10,000 people a day until today. Russian sources are saying 11,000 people left Saturday morning alone and that on Saturday, 3,000 people an hour are exiting the checkpoint to flee the enclave. Their exodus, after seven years of steadfastness in the face of regime probes, suggests a conviction that a battle royale is coming to their neighborhoods and that they do not want to risk being present for it.

The Syrian Arab Army of President Bashar al-Assad advanced in the rebel-held enclave of some 250,000, with Russian Aerospace Forces subjecting neighborhoods to intensive bombardment, which killed over 75 people on Friday.

The Syrian Arab Army has split East Ghouta into three cantons, each dominated by a different rebel group. These are the Saudi-backed Army of Islam, the Turkish-backed Syrian Conquest Front (formerly Nusra) in Douma in the north and the local breakaway from the Syrian Army, the Brigades of the All-Merciful in the east. With these three cut off from one another and from supply routes, the Syrian Arab Army commanders and their Russian advisers are hoping that the rebels will surrender or agree to be transported to Idlib in the far north, one of the last areas under rebel control. Some reports say that Turkey is trying to get this deal for its client, the former Nusra Front (which has been linked to Ayman al-Zawahiri’s al-Qaeda).

Overivew Of Battle For Eastern Ghouta On March 17, 2018 (Map, Video) https://t.co/eOxeEUeUm8 via @southfronteng

The Syrian Arab Army is claiming to have taken 70% of the territory of East Ghouta, and is now bringing in national police to patrol captured villages in the rear of the front lines instead of the army.

On Friday night, the Army of Islam, the Brigade of the All-Merciful and the Freemen of Syria announced their willingness to negotiate with Russia. The Syrian Conquest Front or Nusra is considered a terrorist group by Russia so there is no point in their joining such calls for talks.