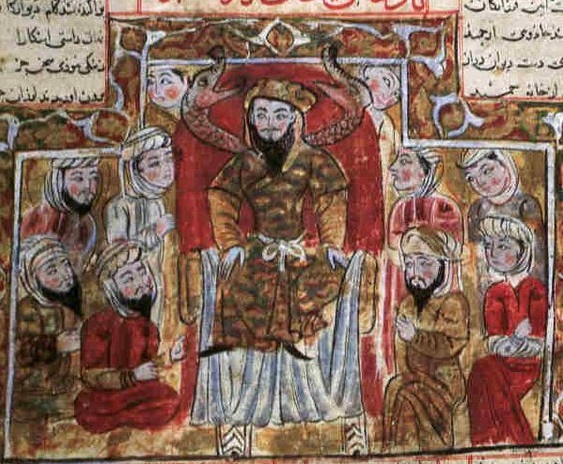 Tuesday, March 20, is the spring equinox this year. Iranians, Kurds, Central Asians and many in Pakistan and India celebrate the equinox as the New Year, which after all makes a lot more sense than starting it in the dead of winter. Spring is symbolically the time of rebirth and renewal.

The Kurds in particular tie the celebration of Now-Ruz or the spring New Year to an ancient Indo-European myth. Thor versus the Midgaard serpent, Indra versus Vritra, Fereydun versus Zohhak, all these stories have many levels. At the level of nature, they are about the storm god fighting cosmic drought, symbolized by a cosmic snake. At the moral level, they are about bravery and generosity fighting selfishness and predatory behavior.

In the Iranian version of the myth, enshrined in the Shahnameh or Book of Kings, a foreign sorcerer takes over Iran, who has a snake growing from each of his shoulders. The snakes demand to be fed brain every day, and the king sends out soldier to kidnap young men (the Kurds say, young Kurdish men), whose brains are served to the royal serpents.

I wrote a sword and sorcery novel based on this material.

An insurrection is begun by a humble blacksmith, the artisan Kaveh, who wears a leather apron. The cause is taken up by the great warrior Fereydun. Together they overthrow Zohhak.

For Kurds, Now-Ruz is the first day of the new year, the vernal equinox and the beginning of spring, but also the day that Kaveh and Fereydun triumphed over Zohhak and freed the young Kurdish men from the ancient Zombie menace.

As Marxism spread in the Middle East in the early twentieth century, Iranian and Kurdish intellectuals saw this myth as about class conflict. Zohhak was the greedy feudalist or capitalist, preying on the brains of the common people. Kaveh was a socialist hero, the worker, the ironsmith, who led the proletariat in rebellion. Leftist Kurds also lionized Kaveh. Syrian Kurds belonging to the left-leaning Democratic Union Party erected a statue to Kaveh in the center of Afrin.

Kaveh on a stamp of the short-lived Iranian Soviet Socialist Republic in Gilan, 1920

This weekend, the Turkish military and its allies from among the fundamentalist Arab guerrillas of the Free Syrian Army swept into the city of Afrin, taking it and displacing tens of thousands of leftist Kurds. The campaign began on January 20, pursued by pro-Islam Turkish president Tayyip Erdogan in response to then Secretary of State Rex Tillerson’s announcement that the US planned to train and equip 50,000 Syrian Kurdish gendarmes to patrol the Syrian border. The US had its eye on keeping ISIL from reasserting itself. But the idea of US-armed and -trained Kurds patrolling the border with Turkey sent Erdogan into a rage.

Turkey sees the some 20 percent of its citizens who are Kurds as of questionable loyalty and potentially secessionists, and blames the leftist Kurdistan Workers Party (PKK) for a decades-long guerrilla dirty war of secession in eastern Anatolia. To be fair, the PKK says it has given up Stalinism and secessionism and just wants more autonomy for the Turkish Kurds. From summer of 2015, however, the PKK launched a series of attacks on Turkish police and troops, to which Erdogan replied with a massive war on Turkish Kurds aimed at damaging villages where PKK sympathies were thought to be strong.

Erdogan does not distinguish between the PKK and the Democratic Union Party of the Syrian Kurds, so in his mind the attack on Afrin was a way of clearing out a nest of terrorists who held territory way too near the Turkish border. He appears to plan to ethnically cleanse all the Syrian Kurds within a hundred miles of the border with Turkey.

As he works east from Afrin, however, Erdogan will run into several problems. One is that his next targets, Manbij and Kobane, have US troops embedded with the Democratic Union Party militia, the YPG or People’s Protection Units. The Pentagon allowed Turkey to gobble up Afrin because it had not been part of the front against ISIL.

But the YPG in the Syrian northeast are American allies and were the only ones in Syria willing to make big sacrifices to roll up ISIL. If the US feeds them to the Turks, it is asking for a return of ISIL to the world stage. Erdogan appears not to care very much about defeating ISIL but he really, really wants to crush all Kurds with any ties to the PKK. (Erdogan hopes to force rural Kurds instead into his pro-Islam Justice and Development Party, thereby dealing a lethal blow both to leftism and to Kurdish subnationalism).

So what has all this got to do with Kaveh?

The first thing the Turks did when they took downtown Afrin was to pull down the statue of the plucky blacksmith who led an urban revolt against the serpentine Zombie eating the brains of the young Kurdish men. The Turks did this the day before Now-Ruz.

Erdogan thereby pretty blatantly announced himself as the Zohhak of the age. Many in the region are wondering if he thereby has really succeeded in his goal of establishing a fundamentalist Arab buffer between the Turkish border and the Kurdish countryside, or whether he is creating millions of Kavehs.