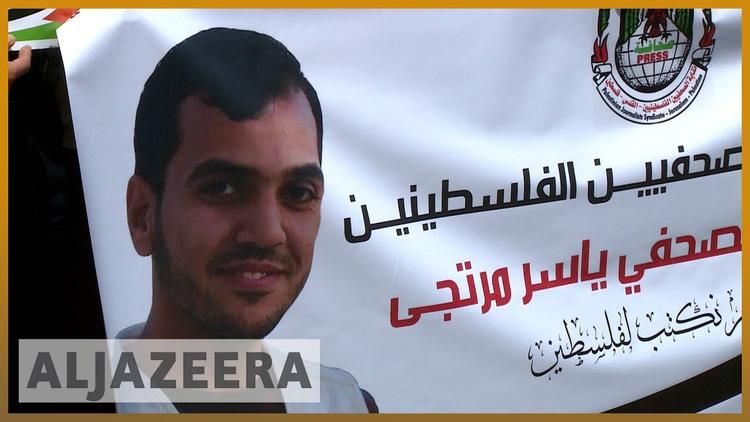 The Great March of Return began on March 30th and will continue until May 15.

A Palestinian journalist covering the Great March of Return in Gaza died Saturday after being wounded by live Israeli ammunition Friday.

Yaser Murtaja, a 30-year-old cameraman with Ain Media, became the 29th Palestinian killed in protests that began on March 30th, which marks Palestinian Land Day. Murtaja was shot in the stomach by Israeli forces in Khuza’a in the south of the Gaza Strip while covering a demonstration along the Gaza border and later died of his wound has died of his injuries. Hundreds gathered Saturday to accompany Murtaja’s family at his funeral.

Photographs show Murtaja was wearing the signature navy-blue vest marked “PRESS,” which distinguishes journalists and other media personnel from other individuals, this didn’t, however, prevent him, and other journalists from being targeted.

Three other journalists were wounded by Israeli sharpshooters, which were deployed to the border days before the march begun to prevent breaches in the border. None of the 29 Palestinians killed by Israeli occupation forces had breached the border fence of the besieged Gaza strip.

There have been no Israeli casualties in the protests, which are set to continue until May 15, when Palestinians will commemorate the 70th anniversary of the Nakba, or catastrophe. The day marks the date 700,000 Palestinians were expelled or fled from their towns and cities after the creation of the state of Israel on May 14, 1948.

Palestinian U.N. envoy, Riyad Mansour, announced Friday that attempts by 14 of the 15 members of the U.N. Security Council to launch an independent investigation into the violence in Gaza were blocked by the United States, permanent council member, and Israel’s chief international ally.

In a statement Friday, Mansour criticized the U.S. calling their decision “irresponsible,” giving Israel “the green light to continue with their onslaught against the civilian population.” This was the second time the U.S. opposed the Security Council statement, which also reaffirmed the right of Palestinians to protest against Israeli policies and occupation peacefully.

Since 2005, when Israel removed 8,000 Jewish settlers living in the Gaza strip Israel has claimed it is no longer occupying Gaza. However, according to international law Israeli control of Gaza’s air, land and sea borders makes them an occupying force, and as such it has the responsibilities of occupying forces to protect the population under occupation.

Israel’s main defense has been an to attempt to blur the line between terrorism and civilians, arguing the march was organized by Hamas, which Israel and its Western allies consider a terrorist organization.

Asad Abu Sharekh, the spokesperson of the march, has countered the claim saying “the march is organized by refugees, doctors, lawyers, university students, Palestinian intellectuals, academics, civil society organizations and Palestinian families.” No Palestinian political faction has claimed the march as their own.

According to international law and the Universal Declaration of Human Rights, all refugees have the right to return to their country of origin or of citizenship voluntarily. Palestinians have upheld their right to return to the land from which they were expelled but also to the properties of their forebears. More than half of the 2 million people who live in Gaza are refugees.