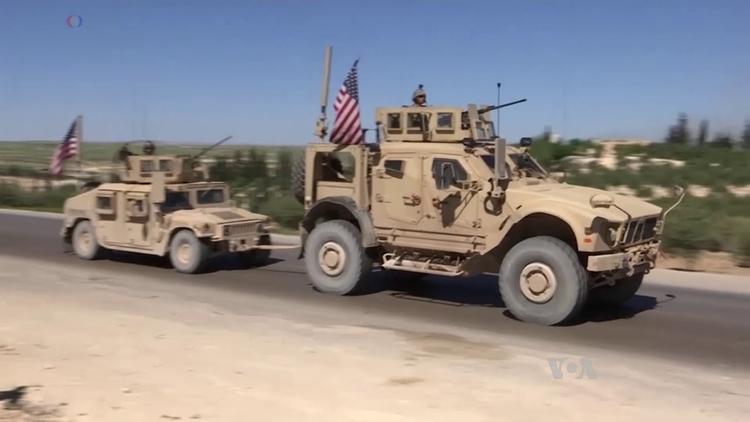 On Sunday, Trump responded to the use by the Syrian regime of a chlorine-filled barrel bomb in the rebel enclave of Douma, a district of East Ghouta.

Since Trump had launched 59 Tomahawk missiles on the Shuayrat Air Base last year this time after regime use of poison gas at Khan Sheykhoun, it is not surprising that Trump is threatening Syria with paying a “big price” for the use of gas.

It is a little surprising that for the first time, Trump was openly critical of Russian President Vladimir Putin, calling him and Iran “responsible” for supporting “Animal Assad.”

Trump has in the past suggested that Syria needed a strongman like Assad, and recently announced that he would pull US troops out of Syria (press reports say he told insiders that the US would be out by October).

It appears that the Israeli air force took advantage of the Douma crisis to bomb a Syrian base between Homs and Palmyra. Typically such Israeli strikes seek to take out arsenals intended for transport to southern Lebanon for Hizbullah.

Trump also lambasted former President Barack Obama for declining, in 2013, to follow through on bombing Syria after having drawn a red line in a speech against use of chemical weapons.

Many dead, including women and children, in mindless CHEMICAL attack in Syria. Area of atrocity is in lockdown and encircled by Syrian Army, making it completely inaccessible to outside world. President Putin, Russia and Iran are responsible for backing Animal Assad. Big price…

….to pay. Open area immediately for medical help and verification. Another humanitarian disaster for no reason whatsoever. SICK!

If President Obama had crossed his stated Red Line In The Sand, the Syrian disaster would have ended long ago! Animal Assad would have been history!

Douma has been militarily dominated for some years by the Saudi-backed Army of Islam militia, a hard line Salafi jihadi organization that has issued threats against the country’s Alawite Shiite minority and foresworn any notion of future Syrian democracy.

The Syrian Arab Army and Russian Aerospace Forces have conducted a successful military campaign to expel other rebels in other parts of East Ghouta, a suburb of Damascus from which the capital has taken mortar fire and bombings, some of them directed by Saudi Arabia. The recent campaign by the al-Assad government has been conducted as a series of war crimes with no consideration for endangering innocent non-combatant lives. Some 1600 people have been killed in the course of the operation.

The campaign in the remaining enclave of Douma, however, has run into obstacles. The Army of Islam is not as willing to stand down and agree to be transfered elsewhere as the other East Ghouta militias were. In part this reluctance stems from their enmity with the Committee for Levantine Liberation (HTS), which dominates the northern province of Idlib, to which the other rebel groups were sent.

The ground assault has been led by the Panther Brigades special operations forces, who have in recent days been said to take high casualties. Since these are the regime’s crack troops, it cannot afford this attrition, which likely led to the decision to use chem. It is possible that the chemical attack was intended to hit Army of Islam fighters and to send a signal with a few deaths that their intransigence would not be permitted. Instead, the chlorine killed dozens of civilians, including children. It is also possible that the massacre of civilians was intentional, and intended to terrorize locals into withdrawing their support from the guerrillas.

Trump’s response to Khan Sheykhoun in 2017 was a one-off with no real military or political impact. I strongly suspect that any response he makes now will be similar, a fireworks show for his domestic constituency without much downstream consequence in Syria itself.

Obama decided not to bomb Syria in September of 2013 because the British parliament voted against a joint operation and because the Republicans in Congress made it clear that they would not support an Obama strike on Syria. Russia offered to sequester Syrian sarin gas stockpiles, and Obama took them up on the offer. It appears that some 90 percent of the sarin stockpiles were in fact destroyed or removed. Saturday’s attack used chlorine, a common industrial chemical.

Since Trump’s own strike on the Shuayrat base last year did not forestall the Douma gassing, it is difficult to understand why Trump thinks a strike in 2013 by Mr. Obama would have done so.

The big question is whether the mercurial and erratic Trump will now rethink his decision to get out of Syria entirely by next fall. The US special operations troops that would be pulled out are in the Syrian far east, embedded among Kurds, and have nothing to do with the Damascus area.