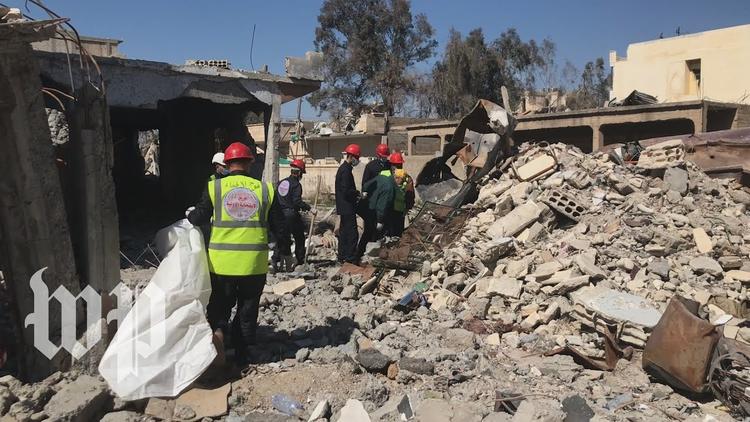 The United Nations Security Council meets again today on Syria – for the sixth time in just over a week. While it’s tempting to ask what the deadlocked council will achieve with more talk, this meeting is an important opportunity for it to address the dire situation in another part of Syria – Raqqa city, recently freed of Islamic State (also known as ISIL) forces.

During a visit to Raqqa in late January, Human Rights Watch documented the devastating impact that ISIL’s homemade landmines, booby traps, and improvised explosive devices inflicted on the city’s residents. Although ISIL forces are gone, these weapons still kill and injure civilians, including more than 150 children. Civil authorities are overstretched. In just one Raqqa neighborhood, the local council reported receiving about 10 requests a day for help with explosive devices that residents uncover. Yet the authorities can only handle 10 requests a week.

Mines are not the only concern in Raqqa. Airwars, a nongovernmental group tracking military operations, has called Raqqa a city “destroyed and then forgotten.” A recent UN mission found that 70 to 80 percent of buildings there were “destroyed or damaged,” with corpses decomposing under the rubble. The city has only three functioning health facilities. Lack of schooling mean many children cannot read or write.

Raqqa’s residents are also waiting for accountability. The capture in Syria of two foreign ISIL suspects should inform international discussions about securing justice for ISIL’s crimes – including by ensuring due process rights and encouraging victim participation in the justice process. We still do not know how many civilians died in the US-backed militia’s campaign to oust ISIL, but the information gathered by independent on-the-ground investigations, including by the New York Times, suggest civilian casualties were far more numerous than the US military estimated or reported. For example, when Human Rights Watch investigated a strike on a boarding school, we collected the names of 40 civilians who were killed. The US-backed coalition says the strike only harmed ISIL fighters. Incidents like this should be re-investigated.

While the world’s attention is rightly focused on identifying those responsible for the recent chemical weapons attack in Syria, it’s worth noting that conventional weapons – airstrikes, artillery, and small arms – have claimed the lives of the vast majority of Syrian victims during the conflict’s seven years.

The people of Raqqa who suffered through the conflict under ISIL deserve our attention and assistance, too.

Akshaya Kumar (@AkshayaSays) is the Deputy United Nations Director at Human Rights Watch, where she is responsible for conducting advocacy with members of the General Assembly and the Security Council, and other UN organs and agencies. Previously Kumar was the Sudan and South Sudan Policy Analyst at The Enough Project where she helped launch The Sentry, a project that aims to dismantle the financing of Africa’s deadliest conflicts. Kumar has also served as Adjunct Professor at Georgetown University Law Center and Law Fellow with the Public International Law & Policy Group. She holds a law degree from Columbia University, a master of laws in human rights, conflict and justice from the School of Oriental and African Studies, and a bachelor’s degree from The George Washington University.