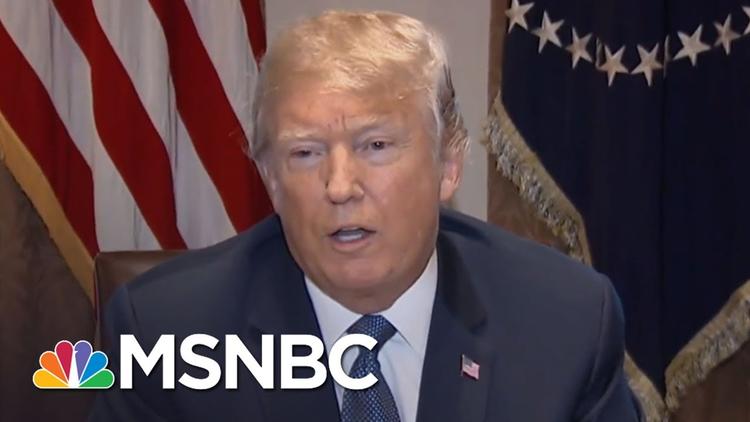 Matt Apuzzo of the New York Times reports that FBI agents produced a warrant at the offices in the Rockefeller Center of Trump’s personal attorney, Michael Cohen, that allowed them to gain access and to spend hours going through and confiscating documents and equipment.

Trump lambasted the search to an audience of senior military officers as attack on our country in a true sense.” He characterized it as a “witch hunt,” “unwarranted,” conducted by Deputy Attorney General Rod Rosenstein and his team of “the worst people,” and made possible only by what he said was Attorney General Jeff Sessions’ unconscionable decision to recuse himself from the Russia investigation. Trump mused in public about firing Special Counsel Robert Mueller, which he said “many people” had urged him to do.

Getting a warrant to go into an attorney’s office is highly unusual because attorney-client privilege is protected under the law. It is only typically done when the FBI has reason to suspect that a subpoena would be ignored or would result in the destruction of the requested documents. The FBI team will have had privilege experts along with it to make sure they did not exceed the authority of the warrant. Going into the office would have had to be signed off on by a judge, by Geoffrey S. Berman, the US attorney of the southern district of New York, and by someone fairly high up at the Department of Justice, likely deputy attorney general, Rod Rosenstein, or someone just below him in rank.

The legal search, under a warrant, came about because Special Counsel Robert Mueller came across suspicious information about Cohen in the course of his investigation of possible election collusion between the Trump campaign and the government of the Russian Federation. The inquiry into Cohen seems not to be related to Russia, which is why Mueller passed it to the FBI. It likely concerns the $130,000 hush money payment Mr. Cohen made twelve days before the November, 2016, election to pornographic film performer Stephanie (“Stormy Daniels”) Clifford regarding her tryst with Donald Trump, .

My own guess is that whatever Mueller tipped the FBI about goes beyond the possible violation of electoral laws by Mr. Cohen, inasmuch as a payment to Ms. Clifford intended to influence the course of the election would technically be illegal. Such a case would be very difficult to prove. It is likely that, in addition, Mueller came across evidence of some financial transaction that was more clearly illegal and more easily prosecuted.

The Rockefeller Center search comes just as Trump is threatening a strike on Syria in response to the alleged regime use of poison gas at Douma, a district of Eastern Ghouta near Damascus, on Saturday. Indeed, the meeting with military officers at which he complained about the “witch hunt” against him was held in part to consider options for Syria.

There is some danger that Mr. Trump will launch a more robust Syrian operation than initially envisioned in order to take attention off the Stormy Daniels scandal. This tactic was immortalized in the 1997 film, “Wag the Dog,” about a president who starts a war to take attention away from a sex scandal on the eve of an election.

Any attempt by Trump to get up a major military campaign in Syria, however, would run into strong Russian opposition. Russian officials are already warning with some stridency against a US strike. If all that Trump does is send down some Tomahawk missiles on some Syrian base, the way he did in 2016, then that is likely to be ineffectual with regard to the ongoing conflict in Syria. The al-Assad regime, backed by Russia and Iran, is gaining control of more and more territory and has now removed all credible threats to the capital, Damascus. It seems likely that in the absence of some dramatic change on the ground, al-Assad’s regime will reassert fragile and brutal control over virtually the entire country within a couple of years.

Trump, however, is a wild card in this issue.