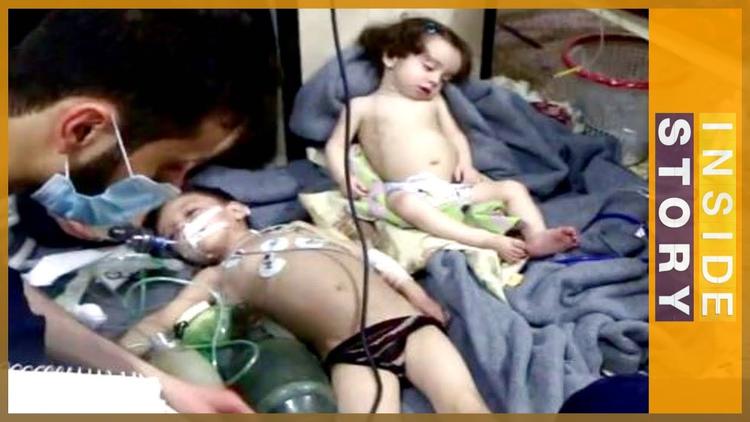 Seven years into its catastrophic conflict, Syria has witnessed yet another major chemical strike. This time the target was the rebel-held city of Douma in Eastern Ghouta, just outside Damascus. The death toll currently stands at around 70 – making the attack as deadly as the infamous sarin strike at Khan Sheikhoun almost exactly a year ago to the day. It is thought the number of confirmed fatalities could rise to 150.

The White Helmets have reported that most of the victims were women and children. A local journalist said the scene “was like judgement day … the situation, the fear, and the destruction are indescribable”.

Like previous incidents, the attack has been widely blamed on Bashar al-Assad’s government. The agent used has not been confirmed. Witnesses say they smelled chlorine, but the sheer level of destruction suggests that something more lethal may have been used as well. There are allegations that the regime used a sarin barrel bomb.

Whatever the precise details, no-one should be surprised by what has happened. Horrified, yes – but Assad has repeatedly used chemical weapons in the civil conflict since 2012, and clearly he is not inclined to stop.

As per usual, the incident has attracted condemnation from Assad’s enemies around the world. US President Donald Trump tweeted that there will be a “big price” to pay for the attack, and derided Assad as an “animal”. The European Union called for “an immediate response by the international community”. Pope Francis weighed in too: “Nothing, nothing can justify the use of such devices of extermination against defenceless people and populations.”

Tough talk indeed. But whether or not this turns into decisive action is another story. After all, we have been here many times before.

This isn’t to say the world hasn’t responded at all. After Khan Shaykhun last year, for example, Trump ordered missile strikes against a Syrian airbase with 59 Tomahawk missiles. His reference to a “big price” suggests there could be a similar move in the offing. Asked how the US might respond to the latest attack, White House homeland security adviser Tom Bossert was asked whether a US response was coming and replied, “I wouldn’t take anything off the table”.

But previous measures, including Trump’s missile strikes, have achieved little. Many at the United Nations have worked hard to bring Assad and his allies to account, but they have been stymied by Russia’s Security Council veto. Former US president, Barack Obama, succeeded in getting Assad to the negotiating table and – together with the support of Russia – he agreed to accede Syria to the Chemical Weapons Convention, the main international agreement that bans and eliminates chemical arms. But Assad still continues to use chemical arms.

Even if these moves have limited the scale of the Syrian government’s chemical attacks, they have continued. Trump and his administration have repeatedly said Trump will observe the red line against chemical warfare set by his Obama – but the line is still being crossed, again and again and again.

As well as the big attacks that make headlines, Assad has repeatedly overseen smaller chlorine strikes. In 2017, Trump was asked in an interview about Assad’s use of chlorine – and Trump didn’t even know that Assad was still using chemical weapons. This doesn’t suggest the president is treating this as a priority. The world is acting, but it isn’t doing enough.

Failing to act decisively now could set off a domino effect. Allowing anyone to carry out chemical strikes with impunity sends a dangerous message. If Assad is not held to his account for his actions, why should anyone else stop short of chemical violence for fear of the world’s wrath?

Punishing violators in itself reinforces, supports and promotes the convention’s ideals. Leaving them unpunished weakens the norm that chemical warfare is wrong – and failing to make an example of Assad threatens the entire weapons control regime. Some argue that violations will not necessarily bring down the Chemical Weapons Convention, but their arguments assume that those who do violate it will be punished somehow.

The world’s progress in controlling chemical weapons should not be underestimated, and the admittedly limited measures such as Trump’s missile strikes that have been taken against Assad deserve credit. Still, it’s incumbent on all those with the power to intervene to ask themselves how many times we have to see horrific and traumatic images of chemical warfare before stronger action is taken.

It’s very easy to sit in front of a computer and type this. It’s hardly an easy problem to solve, especially while Russia continues to support Assad’s government and its forces. But there are severe implications if Assad is not stopped.

Al Jazeera English: “☢️ How can chemical weapons attacks in Syria be stopped?”