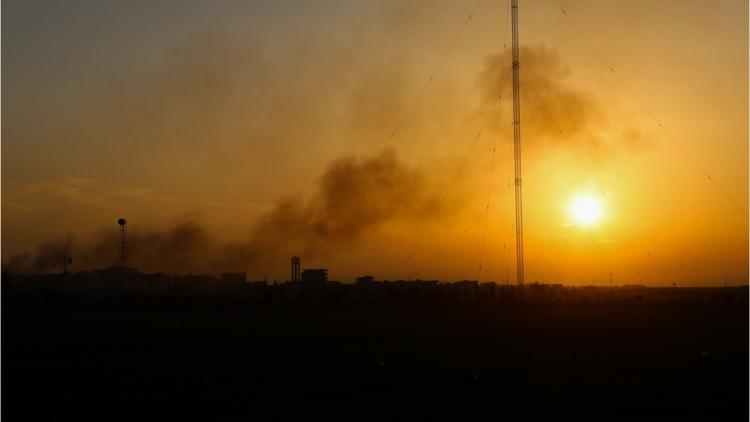 Thomas Friedman’s column this week made several allegations about the danger of an explosive situation in Syria, about which he is certainly correct.

He pointed out that the US-UK-France missile strikes on Syria in reprisal for the alleged use of chlorine gas at Douma by the Damascus government held the potential for severe tensions between the West and the Russian Federation. Had a missile gone astray and hit Russian military personnel, there would have been hell to pay.

He goes on to say that the tensions between Washington and Moscow were only the second-biggest crisis, and that Syria is about to explode because of a building Israel-Iran conflict there.

He puts the blame for the growing conflict between Tel Aviv and Tehran in Syria squarely on the shoulders of Qasem Solaimani, the commander of the Quds Force special operations unit of the Iranian Revolutionary Guards, saying that now that the [US, Saudi and Turkey-backed fundamentalist Salafi] rebels in Syria have largely been defeated Solaimani’s “ego-trip” had lead him to build munitions factories in Syria.

Solaimani, he alleged, now controls–through proxies– four Arab capitals: Sana’a, Baghdad, Damascus, and Beirut, and has escalated its simmering conflict with Israel through use of armed drones.

OMG.. I finally get an opportunity to re-up this picture of Qassem Soleimani on the moon…. pic.twitter.com/JMEOcWKXTd

Iranian spoof of the ubiquity of Qasem Solaimani

This argument is open to challenge on several grounds.

Many observers have pointed out that in the Cold War, American journalists always spoke of American allies but of Soviet “satellites,” as though the Soviet Union were so intrinsically odious that no political elite would dream of actually voluntarily allying with it, and any international support Moscow garnered came as a result of strong-arm tactics.

Mr. Friedman seems to be updating this language for the twenty-first century, giving Iran “control” of Lebanon (!) through its “proxy” (a.k.a. satellite), the Hizbullah party-militia.

Many of us who love Lebanon wish that *someone* were in control of it. But nobody apparently is. If it had a government rather than rolling anarchy, it would have proper electricity, internet, and garbage collection.

Hizbullah has a slight preponderance on the cabinet at the moment, but has a hostile prime minister, the Sunni, Saudi dual-national, Saad Hariri. Despite Hariri’s having been kidnapped and having had his family implicitly threatened and having been forced to resign, by Mr. Friedman’s new hero Mohammed bin Salman of Saudi Arabia, Hariri is still prime minister and somehow managed to blame Iran for the entire imbroglio.

Iran’s proxy, Hizbullah, cannot be said to be in control of Lebanon if it doesn’t even have a friendly prime minister. You could argue that Saudi Arabia, having the executive and having disciplined its “proxy,” actually has control.

Further, Hizbullah’s strength in the current parliament and cabinet comes from its alliance with the Maronite Christians led by former general Michel Aoun. The Maronites also control the officer corps of the Lebanese army.

So Lebanon looks less and less under the “control” of Qasem Solaimani the closer you look.

The fact is that southern Lebanese Shiites had tilted toward Israel back in the 1970s when Mr. Friedman was hanging out at the Concorde Hotel in Beirut and I was living in an apartment in Ain Mreisse. What changed was that the Israelis invaded the country, indiscriminately (Friedman’s word) shelled Beirut, and then occupied southern Lebanon, turning the Shiites against it and causing them to ally with Iran. Israeli policy created Hizbullah, a small organization. (Lebanon’s citizen population is only 4 million or so, and Shiites are probably a third, or 1.3 million. Two-thirds of most populations are children, leaving 410,000 adults, half of whom are women who don’t typically serve as guerrillas. And then some of the 205,000 adult men are old, disabled, running shops, etc.; they can’t possibly mount a very big military force. Someone should ask why Israel, which has the best military in the region and the most sophisticated weaponry and several hundred nuclear weapons is so afraid of 25,000 Shiite boys from the hill country or the rougher neighborhoods of East Beirut. If that is what it takes to put the country in mortal danger, then they may as well pack up and emigrate to Europe and the US today. The answer is that they are not afraid of them as a threat to Israel, but as an annoyance with regard to any plans for Israeli expansionism or hegemony.

The idea that Iran controls the Zaydi Yemeni Helpers of God (Houthis) is even less plausible than that it controls Lebanon. That Tehran has slipped them a little money and a bit of military equipment is not out of the question, but Yemen is blockaded so that will not have been easy. Most Houthi weapons are American, given them from Army stockpiles by their erstwhile ally Ali Abdullah Saleh before the two fell out and they killed him.

Moreover, the Houthis only have about a third of Yemen, with the other two-thirds occupied by Saudi Arabian and Emirati invaders whom Mr. Friedman does not mention. Why, could the Houthi outreach to Iran, likely as limited as it is, have anything to do with thirty years of Wahhabi pressure on them?

Iran has more influence in Baghdad than in the other two countries but Qasem Solaimani doesn’t control the ruling Da`wa Party, which has anyway just split. The Iraqi Shiite militias are increasingly powerful, and are running as parties in the upcoming elections, and Solaimani has a lot of influence with them. But they are his allies, not his proxies, and they hardly control the country.

As for Solaimani and the ayatollahs controlling the Syrian Arab Baath Party in Damascus, surely you jest. Hizbullah and the Shiite militias of Iraq have been useful to the Syrian government but theirs has been a non-ideological alliance of convenience against the Muslim Brotherhood and Saudi-backed Salafis, some of the latter affiliated with al-Qaeda.

That the Israelis de facto allied with the al-Qaeda affiliate in Syria somehow escapes Mr. Friedman’s notice when he is putting all the onus for conflict on Solaimani’s ego. It got to the point where the Israeli Druze protested and lobbied Prime Minister Netanyahu to abandon these commitments in the Golan.

Israel’s de facto alliance with Saudi Arabia accounts for a lot of Iran’s influence in the region, since the Shiites of Iraq, the Zaydis of Yemen, the minorities and secular Sunnis of Syria, and the Shiites and Christians of Lebanon have every reason to fear and hate the hard line Salafis and the fate of being oppressed dhimmis that the Saudis wish for them. Israel tried to occupy a substantial part of Lebanon for nearly twenty years, occupies Syrian territory on the Golan Heights, and raises the hackles of the Arab publics by shooting down peaceful Palestinian protesters in Gaza in cold blood.

Sure, Iran is taking advantage of these fears and fissures. That isn’t control. And Mr. Friedman’s analysis is flawed inasmuch as he puts the Israelis off stage as innocent victims being surrounded by an aggressive Iran rather than seeing them as serial aggressors and occupiers who created some of the opportunities Iran now has in the region by their arrogance and expansionism.

As for an explosion, I doubt it. As long as Russia is in Syria, it is a Russian sphere of influence, and while Moscow doesn’t mind Israel occasionally intervening to attempt to stop the transfer of military equipment to southern Lebanon, Vladimir Putin will not put up with any Israeli actions that endanger Russian military personnel or endanger the stability of the Syrian government.

Hence, we’re much more likely to see simmering low-grade conflict than a big explosion. In all probability, Russia would intervene to stop anything bigger.