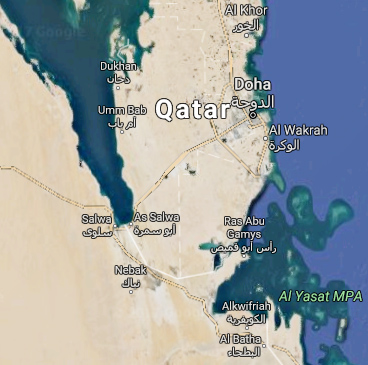 On June 5, 2016 Saudi Arabia, the UAE and Bahrain began a boycott of its Gulf neighbor Qatar, the richest country in the world, cutting off land and air travel over their space. No doubt the same countries that had launched a war against Yemen only a year before thought that Qatar would give up easily. It seems that the main attempt was regime change, given the negative views of both countries about Shaykh Hamad, who built up downtown Doha to resemble Dubai and used the nation’s considerable wealth as a soft-power wedge supporting Islamic groups considered anathema by the Saudis and the UAE. But, as in the case of Yemen, the blockade has been a failure and Shaykh Tamim, the son of Hamad and current ruler, is more popular now than before.

The demands made by the Saudi/UAE alliance were the kind that no country could agree to without total loss of sovereignty. Qatar was to forego any relations with Hamas or the Muslim Brotherhood, close diplomatic relations with Iran, hand over anyone that the Saudis and Emiratis considered “terrorists” (including the elderly Egyptian cleric Al-Qaradawi), shut down al-Jazeera and all other news outlets they fund, and even more. The major mosque in Doha is named after Muhammad ‘Abd al-Wahhab, the founder of the Wahhabi sect, so one demand was that it be renamed, especially since Shaykh Hamad claims descent from the same tribal group as ‘Abd al-Wahhab. As you might imagine, Qatar rejected these demands as unreasonable, but did not retaliate in kind.

In the time since the boycott started, Qatar has been able to use its vast wealth to secure food and other supplies from a variety of countries, especially Turkey and Iran. Before the boycott, about 40% of the Saudi dairy company al-Mara’i crossed the border into Qatar. They were hit so hard that King Salman granted them the right to continue selling their products, but Qatar refused. Turkey immediately stepped in, supplying far better tasting milk and milk products. Before the boycott most major container ships first went to Dubai, which could receive the largest ships, with food then put in smaller ships for Qatar. But as of last September Doha has a new port and no longer needs the UAE.

Now there is a new twist in this battle of the Gulf shaykhdom titans. Saudi Arabia is planning to isolate Qatar geographically by making it an island. The 60 km land border with Qatar will have a canal. This canal will run between Salwa and Khor Al-Udeed and will be 200 m wide with a maximum depth up to 12 meters. Thus, it will be able to receive both container and passenger ships. At least five hotels and a number of resorts will be built along the canal, as well as a free trade zone. In effect Qatar would become a new man-made island with no physical land border. 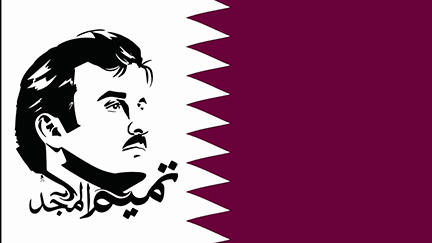 “Tamim the Glorious” a national slogan on the flag of Qatar

Turning Qatar into an island follows the penchant of the UAE to create its own islands, such as Dubai’s Palm Islands, which are the three largest artificial islands in the world. In the process of remaking Mother Nature, some 3 billion cubic feet of sand were dredged from the seafloor and some seven million tons of rock now protect the palm-shaped island with a breakwater seven miles long. The environmental hazards of such an enterprise have been ignored, since billions of dollars have been poured into the project. By the way, the UAE has the worst air in the world, according to the World Bank. If you book at The Atlantis on the Palm Island, for a mere $1,500 per night, you can (as advertised) “dance until dawn,” but don’t forget to pack your gas mask.

As a result of the blockade, the Gulf Cooperation Council (GCC) has been exposed for being a rather uncooperative group, dominated over the years by Saudi Arabia. Oman has largely ignored its fellow Gulf states and maintains good relations with Iran. Kuwait’s emir has tried valiantly to broker a resolution, but so far to no avail. For the future, Qatar would appear to be able to function well despite attempt to isolate them. I suspect that the economic blow has been as hard, if not harder, on the Saudis and Emiratis. Whether a naturally fashioned peninsula or an artificially fashioned island, the oil and gas reserves of Qatar will ensure its economic survival well into the future.