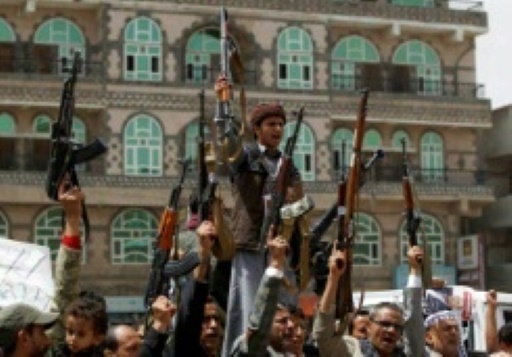 AFP. Huthi rebel supporters protest in Sanaa on April 26, 2018, against the killing of the insurgents’ top political leader, Saleh al-Sammad, in a Saudi-led coalition strike the week before.

Saudi-owned Al-Arabiya television said a total of 38 rebels were killed in the strike on a Huthi interior ministry building.

The Huthis confirmed an air strike on Sanaa but gave no details.

The raid came hours ahead of a public funeral of the Huthis’ political head Saleh al-Sammad, killed last week in a Saudi-led coalition strike.

It also came as newly-appointed US Secretary of State Mike Pompeo was scheduled to land in Riyadh for meetings including talks on the Yemen conflict.

The Iran-backed rebels have been locked in a war with the Saudi-led military alliance, which since 2015 has fought to restore the internationally-recognised Yemeni government to power.

The Yemen conflict is widely seen as a proxy war between regional titans Iran and Saudi Arabia.

The Huthis control Yemen’s capital, Sanaa, as well as much of the country’s north — which borders Saudi Arabia — and the key Hodeida port on Yemen’s Red Sea coast.

Nearly 10,000 people have been killed since the Saudi-led alliance joined the Yemen conflict, triggering what the United Nations has called the world’s worst humanitarian crisis.

Yemen now stands at the brink of famine.

The Saudi-led coalition imposed a total blockade on Yemen’s ports in November in retaliation for cross-border Huthi missile attacks on Saudi Arabia.

The blockade has since been partially lifted, but access to the impoverished country remains limited.