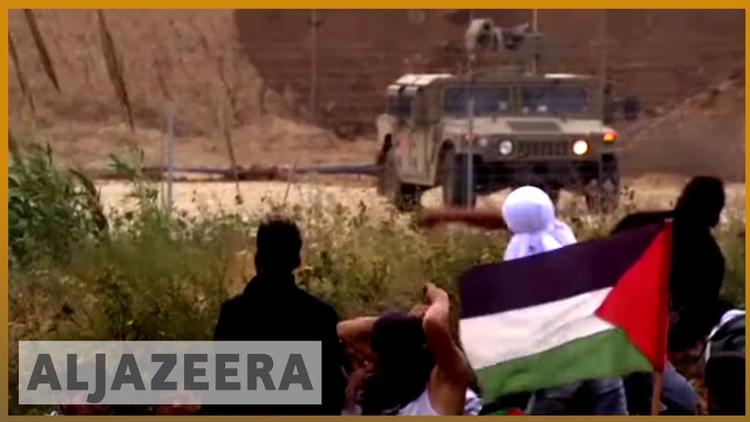 BETHLEHEM (Ma’an) — Human rights organizations have come out in full condemnation of Israel’s violent response to massive unarmed civilian protests in Gaza on Friday, which left 16 Palestinians – one farmer and 15 protesters — dead along the Gaza border. Adalah, the Legal Center for Arab Minority Rights, released a statement on Friday condemning Israel’s use of military snipers against the civilian protesters. “The Israeli military’s use of 100 snipers against unarmed Palestinian civilian protesters in the Gaza Strip is illegal, the statement said, adding “live gunfire on unarmed civilians constitutes a brutal violation of the international legal obligation to distinguish between civilians and combatants.”“Israel is obligated to act in accordance with international law,” Adalah said, adding that it will be calling for an investigation into those responsible for the deaths in Gaza, and “will demand that those found responsible for the killings be brought to justice.”According to the group, on Thursday, the day before 16 Palestinians were shot dead along the border with Gaza, Adalah and the Gaza-based al-Mezan Center for Human Rights sent a letter to Israeli Attorney General Avichai Mandelblit and the Israeli Military Advocate General “demanding they act to prevent the use of sniper fire against protesters or for crowd dispersion, and to clearly and directly order Israeli forces to refrain from use of live ammunition of any variety – including sniper fire.”The groups also sent a second letter calling on the Israeli military “to remove all social media posts threatening participants in today’s Gaza march that they will be military targets and also remove social media posts threatening the civilian population in Gaza.”Leading up to the march, the Israeli army released a statement saying it had declared the border area along Gaza a “closed military zone,” meaning that any Palestinian who got close to the border fence could risk getting shot.The Israeli army released statements on Twitter describing the protests as “violent riots.”Meanwhile, Israeli human rights organization B’Tselem released a statement on Thursday, condemning the repeated threats of Israeli officials to use lethal force against the civilian protesters. “Completely ignoring the humanitarian disaster in Gaza and Israel’s responsibility for it, they are couching the planned protest in terms of a security risk, framing the demonstrators as terrorists and referring to Gaza as a ‘combat zone’,” B’Tselem said. “Fragments of information reported by the media indicate that: soldiers will be ordered to shoot anyone coming within 300 meters of the fence; snipers will fire at anyone touching it; live fire will be used also in circumstances which are non-life-threatening. In other words: shoot-to-kill unarmed Palestinians taking part in these demonstrations,” the group said. B’Tselem highlighted that Israel’s policy of lethally shooting Palestinian demonstrators in Gaza has been in practice for some time, noting that “in December 2017 alone – the most lethal month in the last year – Israeli forces shot and killed eight unarmed Palestinian demonstrators in Gaza.”“Israel’s presumption that it can dictate the actions of Palestinians inside the Gaza Strip is absurd. The decision where and whether and how to demonstrate in Gaza is not Israel’s to make – not with regard to tomorrow’s demonstrations nor in general with regard to daily life,” B’Tselem said. The group concluded by noting that official Israeli statements” have made no reference to the actual reason for the protest – the disastrous reality in Gaza – or to the right to free protest.”“Israel has the power to immediately change life in Gaza for the better, but has chosen not to do so. It has made Gaza a huge prison, yet forbids the prisoners even to protest against this, on pain of death.”The majority of the nearly two million Palestinians in the Gaza Strip are sealed inside the coastal enclave due to the continuation of the military blockade imposed by Israel and upheld by Egypt on the southern border.The destruction from three Israeli offensives over the past six years, including damage to the enclave’s water, sanitation, energy, and medical facilities, coupled with slow reconstruction due to the blockade led the UN in September to warn that Gaza could be “uninhabitable” by 2020.