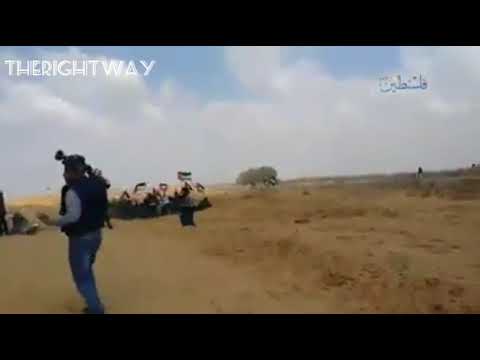 Beirut–The Committee to Protect Journalists has condemned comments by Israel’s defense minister over the weekend that appear to justify the killing of Palestinian journalist Yaser Murtaja in Gaza, and called on authorities to hold to account anyone who shot journalists with live ammunition. Murtaja died on April 7 of injuries sustained the previous day while covering protests in Gaza in which at least five other journalists were injured.

“Journalists are civilians, and security forces have a duty to ensure that they can work safely,” CPJ Middle East and North Africa Program Coordinator Sherif Mansour said from Washington D.C. “Israeli authorities must thoroughly investigate the killing of Yaser Murtaja, rather than sustain their record of making empty pledges to probe the killing of journalists during conflict and other dangerous assignments.”

At least 16 journalists have been killed in Israel and the Occupied Palestinian Territory since CPJ began keeping records in 1992. According to CPJ research, no one has been held accountable for any of the deaths.

Murtaja, a photojournalist and cameraperson for the Gaza-based media production company Ain Media, was injured when a live round hit him in the abdomen while he was covering protests in the area east of Khan Younis city, the local press freedom group Palestinian Center for Media Development (MADA) reported, quoting Murtaja’s colleague Hossam Hisham Salem who was at the scene. Murtaja died the next day from wounds sustained during the shooting, according to MADA, the regional press freedom group the Journalist Support Committee (JSC), and the Palestinian Journalist Syndicate (PJS).

Pictures posted on social media by local journalists and witness testimony from local journalists show that Murtaja was wearing a bulletproof vest and helmet that were both clearly marked with the words “PRESS” when he was hit.

In response to Murtaja’s death, Israeli Defense Minister Avigdor Lieberman said that “whoever operates drones above IDF [Israel Defense Forces] soldiers needs to understand that he is endangering himself,” and “We have seen dozens of cases of Hamas activists were disguised as medics and journalists,” according to local media reports.

In a statement released on April 7, the IDF denied that it targets journalists and said the circumstances of Murtaja’s death would be investigated, news reports said. The IDF did not immediately reply to CPJ’s email requesting comment.

Reuters cited three Palestinian journalists as saying that Murtaja was not operating a drone at the time of his killing.

At least five other journalists were injured while covering the protests on April 6:

– Adham al-Hajjar, cameraman for the Moroccan private broadcaster Medi1TV, was hit by a live round in his left knee in an area east of Gaza City, according to JSC, MADA, Saada, and pictures posted on Facebook by local journalists and friends.

– Khalil abu Adhreh, cameraperson for Hamas-affiliated al-Aqsa TV, was hit by a live round in his left leg in the southern Gazan city of Rafah, according to his employer, Saada, and JSC. Footage posted on YouTube shows that abu Adhreh, who was a few hundred meters away from the border fence, was filming protesters who were occasionally throwing stones and waving Palestinian flags when he was hit.

– Freelance photographer Ibrahim al-Za’noun was hit by a live round in his left arm in an area east of the northern Gazan city of Jabalia, according to JSC, Saada, and news reports.

– Ezz Abu Shanab, editor for the independent local news agency Sky Press Agency, was hit by a live round in his left leg in Gaza city, according to local journalist Saada, and a Facebook post from the editor Abu Shanab.

– Saber Nureldine, photographer for the European Press Photo Agency, was hit by shrapnel in his head and shoulder while working east of Gaza City, according to a Facebook post from Nureldine and the PJS.

According to CPJ research and news reports, at least 10 Palestinian journalists were injured the previous week by live rounds, gas canisters, and tear gas.

A report released by Human Rights Watch on April 3 said that Israeli soldiers had orders from senior Israeli officials to use live ammunition against Palestinian protesters even if protesters did not pose a threat to the soldiers or civilians.