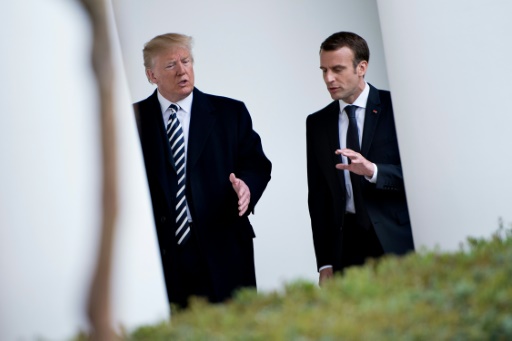 Gilles Paris and Marc Semo at Le Monde report on President Emmanuel Macron’s state visit to President Trump in Washington and their discussions regarding the Iran deal (Joint Comprehensive Plan of Action or JCPOA).

They say that Macron repeated his four points regarding Iran policy:

2. but to add further measures to extend it beyond that date

3. arrive at a new accord regarding Iran’s ballistic missile program (not an issue addressed in the JCPOA)

4. to establish conditions for regional stability and contain the influence of the Islamic Republic

The last point, they say, refers to Macron’s hopes to bring the Syrian civil war to an end in cooperation with Russia and Turkey and then to reduce Iran’s influence in France’s former colony. They point out that piling on this issue to the nuclear one risks making any further negotiations with Tehran even more problematic.

Photo Credit: AFP / Brendan Smialowski. US President Donald Trump launched into an angry tirade against the Iran nuclear accord as he hosted France’s Emmanuel Macron at the White House

The authors of the Le Monde article put their finger on the key issue in reopening negotiations. The original JCPOA negotiations between the five permanent members of the UN Security Council, plus Germany as an informal representative of the European Union, and Iran, carefully avoided complicating the talks by adding further concerns beyond nuclear enrichment.

At the time, there were voices, especially Rupert Murdoch and his Fox Cable “News,” who wanted to use the negotiations to address hostages, or Iran’s attitude to Israel’s occupation of Palestine, or any number of other concerns. John Kerry and his UNSC colleagues carefully declined to listen to those voices, because the nuclear issue was the important one in the negotiations, and adding other points would only make it even less likely to reach an accord.

It should be remembered that the JCPOA closed off all the plausible paths to an Iranian nuclear weapon (which all US and other intelligence agencies assess that Tehran had *not* decided to pursue).

2. Iran destroyed its stockpile of uranium enriched to 19.5% for its medical reactor.

The sort of nuclear know-how Iran has gained cannot be destroyed short of invading and occupying the country and killing or permanently removing in some way all the concerned scientists, engineers, administrators, etc. What the JCPOA did was to extend the timeline whereby Iran could construct a bomb if it decided to from a few months to a year or more, and to establish trip wires that would alert the UNSC that Iran had made the decision to go nuclear.

Iran gave up 90% of its program, in order to lift international sanctions and get its economy back on an even keel.

In fact, Iran was taken advantage of, since the United States if anything increased economic sanctions after the deal was signed, and went around threatening European companies who considered investing in Iran. So Iran gave up its leverage and was greatly weakened and then it was stiffed.

This routine is similar to the one played on the Palestinians with Oslo, which required them to recognize Israel in return for a rump Palestinian state and Israeli withdrawal from the Occupied Palestinian territories, but which saw the US and Israel pocket the PLO recognition and then proceed to screw the Palestinians over lethally.

Trump’s discontents with the program are all based on fake news. Part of the deal was that the US would release tens of billions of dollars belonging to Iran that it had sequestered in US banks as part of the boycott. It wasn’t $150 billion and the US did not “give” the money to Iran, it simply returned Iran’s own money to Tehran after having taken it hostage.

The deal deliberately did not discuss Iran’s ballistic missile program, which is much more primitive than that of India, Pakistan, Russia, Israel and other near neighbors, and into the warheads of which Iran has nothing to put.

As for Iran’s alliance with Syria, it is bilateral and difficult to see how it is any of France’s and America’s business. It certainly is not something Syria, Russia or Iran will give up. Nor is there a way for Macron and Trump to make them give it up. It is, like many of Macron’s ideas, not fully thought through and would be perceived in the region as arrogant. Trump is more complex, since he seems to want to acquiesce in Russian hegemony in Syria, which implies acquiescing in the Iranian presence that supports the al-Assad goverment that Russia is propping up. But Trump is capable of believing twelve self-contradictory things before breakfast.

For its part, Iran is not interested in renegotiating the JCPOA. President Hassan Rouhani said that there is no warrant for Trump and Macron, just the two of them, insisting on renegotiating a 7-sided agreement. “By what right?” He had earlier said that if the US pulls out, it will have no impact on Iran, since that country has extensive contingency plans. He did say, however, that there would be dire consequences for the US. He also ridiculed Trump as a clueless real estate developer who does not even understand the issues.

This slam is amusing since American elites always held that Shiite ayatollahs cannot run a country because they are ignorant of international affairs and economics.

Foreign Minister Javad Zarif pointed out that if the 2015 agreement is made to collapse by the US, Iran always has the option of starting back up its uranium enrichment program. Trump threatened Iran over these remarks, but then he has threatened North Korea as well, and nothing has happened.