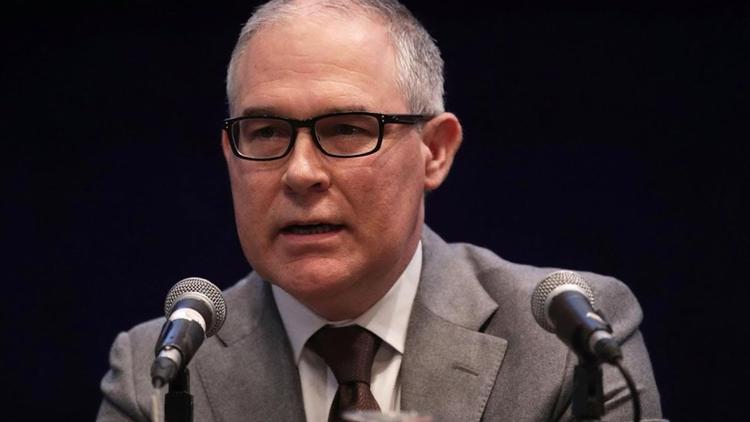 “As he has done over and over again, he showed contempt for transparency, ethical guidelines, and the public interest.”

As key figures of the Trump administration face mounting concerns about conflicts of interest, a growing number of critics are calling for the resignation of Environmental Protection Agency Administrator Scott Pruitt after ABC News revealed that last year he rented a D.C. condo owned by the wife of a top energy lobbyist, in what some are describing as “a sweetheart deal.”

“This deal stinks like the swamp Scott Pruitt is mired in… He must be fired immediately.”

“This deal stinks like the swamp Scott Pruitt is mired in. Pruitt’s wanton corruption doesn’t just ignore the rule of law and clear ethical boundaries, it threatens the health of our families,” said Sierra Club executive director Michael Brune. “He must be fired immediately.”

“Pruitt the Polluter”—who earned his nickname by attempting to roll back numerous anti-pollution regulations—paid a nightly rental fee of $50 for a bedroom in a condo co-owned by healthcare lobbyist Vicki Hart, the wife of energy lobbyist Steven Hart, whose firm reported a $16 million federal lobbying income last year and who worked temporarily on the Trump transition team.

Pruitt stayed at the townhouse “while transitioning to Washington,” according to an EPA spokesperson who verified the terms of the lease to The Hill. By the time Pruitt moved out at the end of July 2017—more than four months after he was confirmed as head of the EPA—he had racked up $6,100 in rent charges.

“The price tag on Pruitt’s rental arrangement is one key question when determining if it constitutes an improper gift,” ABC noted, citing ethics experts.

“I think it certainly creates a perception problem, especially if Mr. Hart is seeking to influence the agency,” said Bryson Morgan, the former investigative counsel at the U.S. House of Representatives Office of Congressional Ethics. “That’s why there is a gift rule.”

A source familiar with the lease told Bloomberg that it resembled “an Airbnb-style arrangement”—even though “Pruitt wasn’t a transient and instead made the apartment his home on nights he was in Washington.” Bloomberg reviewed “a sampling of current listings of apartments for rent near Pruitt’s temporary pad” and found studio and one-bedroom rentals for $1,350 to $1,975 a month as well as Airbnb listings for $45 to $68 per night.

“Since Administrator Pruitt is already involved in allegations of accepting gifts of travel, the question arises whether a sense of entitlement may have led him to violate the gift rule on this rental arragement as well.”
—Public Citizen

However, a source familiar with the neighborhood’s rental rates told ABC that condo, which “is in a prime location—less than a block from the U.S. Capitol complex,” is in a three-story duplex where apartments have been leased for as much as $5,000 per month.

While the EPA’s senior ethics counsel Justina Fugh said, “I don’t conclude that this is a prohibited gift at all” —calling it “a routine business transaction and permissible even if from a personal friend”—the watchdog group Public Citizen has demanded an investigation.

Referencing the EPA Office of Inspector General’s probe into Pruitt’s travel habits, Public Citizen wrote to the office, “Since Administrator Pruitt is already involved in allegations of accepting gifts of travel, the question arises whether a sense of entitlement may have led him to violate the gift rule on this rental arragement as well.”

Here Pruitt is meeting with a lobbyist from Williams & Jensen, at the same time as he is living in condo for $50 a night owned by spouse of chairman of the firm, to discuss matters related to Oklahoma Gas & Electric, a lobbying client of Williams & Jensen. pic.twitter.com/vPgRriJ69T

Rep. Don Beyer (D-Va.), meanwhile, is one of the critics calling on Pruitt to step down.

Pointing out that Pruitt “apparently did not report the details of his arrangement to ethics counsel at the EPA beforehand, nor to the public,” Beyer said in a statement, “As he has done over and over again, he showed contempt for transparency, ethical guidelines, and the public interest.”

Beyer also accused the the administrator of “endeavor[ing] to corrupt the Environmental Protection Agency to place polluters’ profits above Americans’ health and the fate of the planet” by giving “free rein to lobbyists and industry insiders to sabotage the EPA’s mission.”

“Pruitt must resign,” Beyer concluded. “If he refuses to do so he should be fired immediately.”

ABC News and The Hill reported Friday that McKenna Pruitt, the administrator’s daughter, also stayed at the two-bedroom condo from May through August last year, while interning for an attorney in the Trump White House.

“The timeline suggests that Pruitt’s daughter stayed with him in the rental for three month’s time,” The Hill noted. “The EPA did not respond to questions about what Pruitt’s daughter paid for her rent and if she too paid on a day-by-day basis during her months-long internship.”