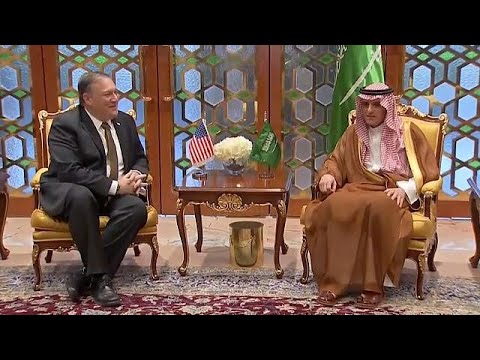 Pompeo’s program, like the foreign policy of Trump in general, was full of unlikely projects and ideologically driven impracticalities.

An obsession with Iran drove most of these unlikely plans.

Pompeo pressured the Saudi government to stop boycotting neighboring Qatar. From the point of view of Pompeo and his fellow cabinet member secretary of defense James Mattis, the rift inside the Gulf Cooperation Council (GCC) weakens US allies vis-a-vis Iran in the crucial Gulf region, from which 22 percent of world petroleum is shipped.

The GCC, founded in 1981, grouped Kuwait, Saudi Arabia, Bahrain, Qatar, the United Arab Emirates, and Oman. It had functioned to integrate the economies, infrastructures and foreign policies of the six Sunni oil monarchies. On June 5, 2017, Saudi Arabia, the UAE and Bahrain (later joined by Egypt) launched a blockade of Qatar and apparently considered invading it and putting a puppet on the throne. Trump initially supported this move, backed by his son-in-law Jared Kushner. But over time the blockade failed to have a dramatic effect and Qatar regrouped and convinced the elites in Washington that the case made by Saudi Arabia was a flimsy pretext for aggression.

Qatar had supported the Arab Spring youth revolts of 2011-2013, which Saudi Arabia, an absolute monarchy, absolutely detested. It also tilted toward the Muslim Brotherhood and other parties of the Muslim religious right that were interested in entering parliamentary politics, a development that the Saudis were determined to crush. Qatar has correct but no warm relations with Iran because the two countries share a gas field and need to negotiate over it, but Saudi Arabia wanted Doha to cut off diplomatic relations with Iran. The charges Saudi Arabia launched against Qatar were without foundation, such as support for Lebanon’s Hizbullah (Qatar gave south Lebanon redevelopment aid after the 2006 war, which is not the same as supporting Hizbullah. Qatar has not supported Hamas in Gaza, but has sent aid and development funds to Gaza with the cooperation of Israel, using Israeli banks.) My own guess is that Saudi Arabia wanted to get hold of some of Qatar’s wealth and that the blockade was a bank robbery.

Pompeo’s demand that the Saudis cut it out is welcome, but perhaps not practical. Saudi Arabia’s ultimatum to Qatar was such that it is hard for Riyadh to climb down from it without losing face. Qatar is certainly not going to compromise by closing down its Al Jazeera network (Saudi Arabia wants to end freedom of the press everywhere in the Middle East) or by changing its foreign policy.

So it remains to be seen if Pompeo can shore up the Gulf alliance against Iran, about which not only Qatar but Oman and Kuwait are diffident.

Pompeo also appears (according to NYT) to have pressured the Saudis to find a negotiated end to the Yemen war, which the Saudis and their allies launched in 2015 and which is an embarrassing humanitarian disaster with few military victories.

Pompeo will be preparing Saudi Arabia and Israel for Trump’s withdrawal from the 2015 Iran deal curtailing Iran’s nuclear enrichment program. He wants to ratchet up boycotts of Iran again, which the deal had attempted to end.

I predict that Saudi Arabia will be all in with regard to the Pompeo crusade against Iran, but that Riyadh will drag its feet with regard to its blockade of Qatar and its dreadful war on Yemen.