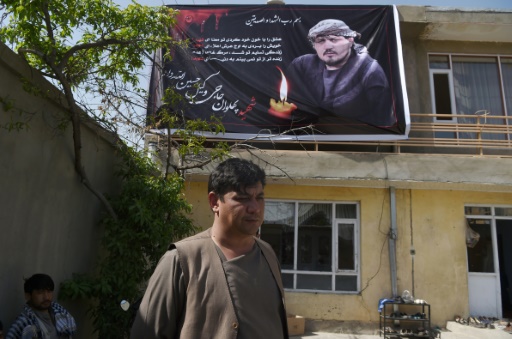 Kabul (AFP) – Whenever suicide attackers struck his fellow Shiites in Kabul, Wakil Hussain Allahdad would drop what he was doing and rush to the scene to help rescue survivors and carry away the dead.

But on Sunday Allahdad himself became a victim, fatally wounded in the devastating blast outside a voter registration centre in the Afghan capital.

AFP / Wakil KOHSAR. Ghulam Sakhi Allahdad, 38, stands under a poster bearing the image of his brother Wakil Hussain Allahdad, 32, one of the 57 victims of a suicide blast on a voter registration centre in Kabul, at Wakil’s house in the city on April 23, 2018.

People walk past a banner bearing the image of Wakil Hussain Allahdad, 32, one of the 57 victims of a suicide blast on a voter registration centre in Kabul, in the city on April 23, 2018

The suicide attack, claimed by the Islamic State group, killed at least 57 people and wounded more than 100, making it the deadliest assault in the war-weary city since a bomb-laden ambulance exploded in January.

Allahdad had been serving customers in his photography shop across the street when the bomber blew himself up in a crowd waiting to pick up their national identification certificates, Allahdad’s older brother, Ghulam Sakhi Allahdad, told AFP on Monday.

The father of four had opened the shop recently in the hope of cashing in on a surge in demand for passport-sized photos, as people rushed to get the national IDs needed to register to vote in legislative elections scheduled for October.

Unconscious and bleeding profusely from his head and mouth, 32-year-old Allahdad was taken to Isteqlal hospital before being transferred to a trauma facility run by Italian NGO Emergency where he died. 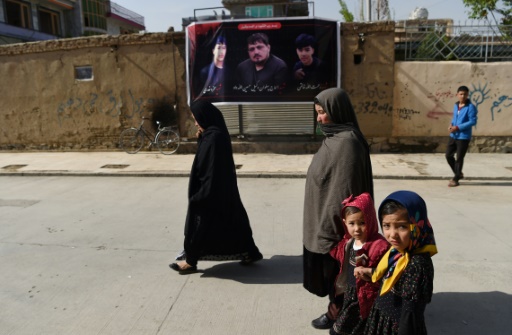 AFP / Wakil KOHSAR. People walk past a banner bearing the image of Wakil Hussain Allahdad, 32, one of the 57 victims of a suicide blast on a voter registration centre in Kabul, in the city on April 23, 2018.

His two colleagues and several customers were also killed by the blast that caused carnage in the street, where pools of blood and body parts mixed with shattered glass and blood-stained photos. A female customer was wounded.

Allahdad, who was also a competitive wrestler, was well known in Kabul’s Shiite community.

After witnessing the deaths of friends in an IS-claimed suicide bomb targeting Shiite ethnic Hazaras in July 2016, he made a pledge to assist victims of future attacks, his younger brother, Ahmad Hussain Allahdad, told AFP.

Since then IS militants, who belong to the Sunni branch of Islam, have repeatedly targeted Kabul’s Shiites as they seek to stir up sectarian violence.

Each time they struck, Allahdad would race to help.

“He was always there for his people. Whenever there was a terrorist incident he would drop everything and rush to the scene,” Ghulam Sakhi Allahdad said.

“He would save anyone regardless of who they were.”

Huge posters paying tribute to Allahdad and other victims of Sunday’s attack hung in the streets of the neighbourhood where the blast happened. 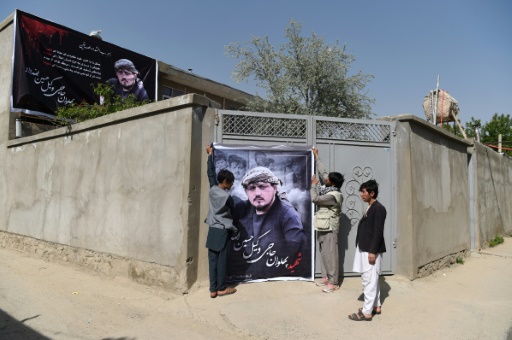 AFP / Wakil KOHSAR. Relatives of Wakil Hussain Allahdad, 32, one of the 57 victims of a suicide attack on a voter registration centre in Kabul, hang up a banner bearing his picture outside his house in the Afghan capital on April 23, 2018.

Ordinary Afghans touched by Allahdad’s bravery flooded Facebook with messages of admiration for a man they described as a hero.

Allahdad “was a real hero and a courageous man”, Mustafa Hasas wrote on Facebook where several photos of the burly, bearded man were being shared.

“He was a warrior. He was so brave. In almost every deadly incident he was there to help people.”

Azim Hajizada wrote: “I can’t believe he is not among us anymore. It is a disaster for our society. He was always there to stand behind his people like a mountain.”

Among the photos circulating online was an AFP picture taken on October 11, 2016, of a grim-faced man carrying a bleeding girl wearing a blue shalwar kameez.

The brothers identified the man in the photo as Allahdad, who had gone to help victims after gunmen opened fire on Shiite pilgrims in Kabul.

“His death is unbelievable for me and for many people here,” a man called Reza, who lives in the same neighbourhood, told AFP.

“He was a hero, an invincible hero, After… saving so many lives, so many victims, we never thought he would one day himself become a victim.