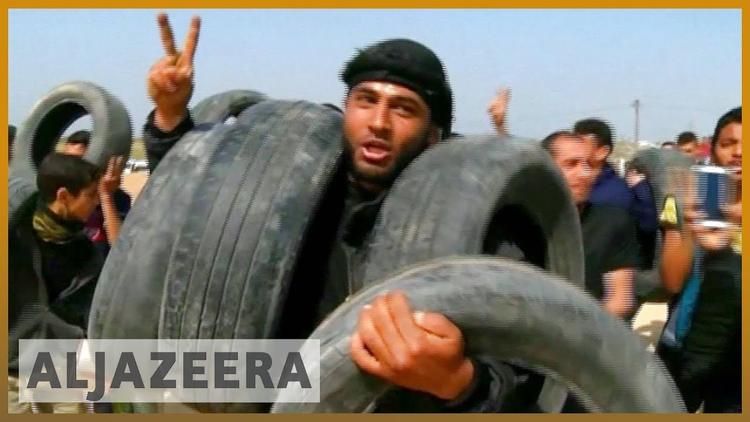 GAZA CITY (Ma’an) — A second Palestinian protester was shot and killed by Israeli forces along the Gaza border, the Palestinian Ministry of Health confirmed around 4:30 p.m.

The slain Palestinian was identified as Majdi Ramadan Shabat. He was killed in demonstrations taking place east of Gaza City, in the northern coastal enclave.

Meanwhile, the ministry reported that over 250 protesters had been injured from across the Gaza Strip, as Israeli planes dropped tear gas on protesters.

Shabat’s death brought the death toll in Gaza to 23 since massive demonstrations began on Friday March 30.

Earlier on Friday a Palestinian identified as Thaer Rabia from the northern Gaza Strip town of Jabaliya, succumbed to wounds sustained during Friday protests one week ago.

Around 3:30 p.m., the ministry reported that Usama Khamis Qudeih, 39, was killed in protests east of Khan Younis in the southern Gaza Strip.

Friday’s protests marked one week since the beginning of the “Great March of Return,” a weeks-long protests in which almost 1.3 million of Gaza’s 2 million inhabitants who are refugees are demanding their right to return to their original homelands.

The six-week protest is set to end on May 15th, the 70th anniversary of the Palestinian Nakba, or “catastrophe,” when the state of Israel was created, leaving some 750,000 Palestinians and millions of their descendants as refugees.

Palestinians have nicknamed this Friday’s demonstration “Jum’at al-Kawshook”, which translates to “Friday of Tires”, as protesters set fire to thousands of tires along the border, creating huge clouds of black smoke in order to confuse Israeli snipers and prevent them from targeting protesters with live ammunition.

Despite widespread outcry from international rights groups who have condemned Israel’s excessive use of forces against the civilian protesters, Israeli has maintained its open-fire rules for the Gaza border.