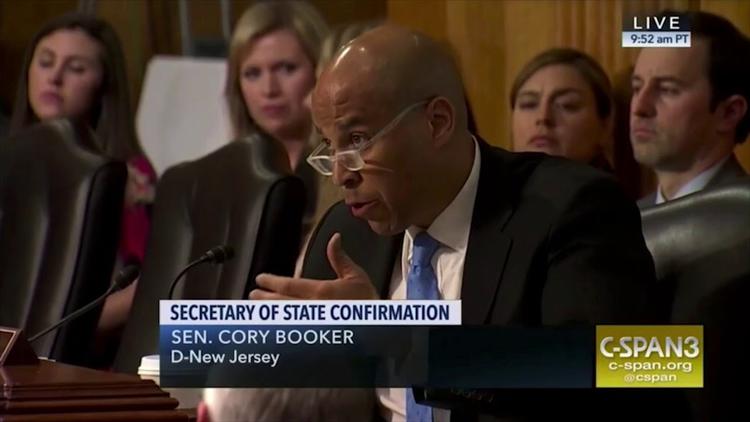 NBC is reporting that Mike Pompeo lacks the votes in the Senate Foreign Relations Committee to have his nomination to be Secretary of State be favorably reported out of committee on Monday night. Democrats on the committee have expressed fears that Pompeo, a warmonger, will reinforce the worst tendencies of Trump. Pompeo has been director of the Central Intelligence Agency for the past year. He was tapped to succeed ousted former Secretary of State Rex Tillerson, according to Trump, in large part because Tillerson was “all right with” the Iran deal negotiated by the UN Security Council in 2015. Fears that Pompeo might drag us into a hot war with Iran may also have swayed some Republican members of the committee, which has a GOP majority.

Senate majority leader Mitch McConnell still has the ability to bring a vote on Pompeo to the floor of the full senate, assuming he can bypass some procedural obstacles created by the virtually unanimous opposition of Democrats. My guess is that Pompeo would be voted in under those circumstances, and the committee’s opposition could end up being a hiccough.

It is, however, extraordinary for a Secretary of State nominee to be rejected by the powerful Senate Foreign Relations Committee, especially when the Senate is dominated by the president’s party!

Here are some reasons that the Committee is right to have the severest reservations about Pompeo as Secretary of State:

1. Pompeo has openly stated that he intends to undermine the Iran Deal (JCPOA) . The Iran deal is perhaps the most successful piece of anti-proliferation diplomacy in history. The new secretary of state will have to see through negotiations with North Korea. Pyongyang will notice if Iran is actively punished, as Pompeo intends, for having cooperated on non-proliferation with the international community. Although Kim Jong Un has secretly met with Pompeo, he likely was taking his measure. If it becomes clear that if you do a deal with Washington on closing down nuclear enrichment, you will then be stabbed in the back by the likes of Pompeo, then North Korea will likely get cold feet.

2. Pompeo is confused between ISIL, a seedy terrorist organization that brutalized and over-taxed its captive population, and Iran. The Iranian government is authoritarian, but less so than Pompeo’s friends the Saudis (he gave a CIA honor to King Salman). Iran has parliamentary and presidential elections that are deeply flawed but still consequential. Saudi Arabia is an absolute monarchy that imposes a thousand lashes on dissident bloggers for speaking out. Neither one is like ISIL. Someone who does not know the difference between ISIL and the republic of Iran should not be secretary of state.

3. Pompeo is a bigotted and fiery Islamophobe who has attempted to smear ordinary Muslim-Americans. It is not clear that he believes in their first amendment rights to freedom of religion. He is close to conspiracy theorist Frank Gaffney, a known hate purveyor against Muslim-Americans. Pompeo cannot work with the 56 Muslim-majority countries in the world, or with countries with substantial Muslim populations from Singapore to India, if he hates the Islamic religion and sees its law code as illegitimate (does he feel that way about Jewish halacha as well?)

4. Pompeo opposes gay marriage rights and slammed the Supreme Court decision (by a GOP-dominated court) recognizing those rights as “a shocking abuse of power.” He can’t lead gay State Department personnel if he thinks they are perverts.

5. Pompeo is and has for long been in the back pocket of the Koch brothers’ big oil interests. The secretary of state has an important environmental impact. Even Rex Tillerson, former CEO of ExxonMobil, recognized the importance of the Paris Climate Pact. Pompeo will take orders from the Kochs to destroy it, and the earth along with it.

6. Pompeo is a conspiracy theorist who should not be making US policy. He spent millions of tax payer dollars on a phony investigation of the Benghazi tragedy that was designed to tear down Secretary of State Hillary Clinton because she was seen as a plausible future Democratic president. Pompeo continually and deliberately distorted the documents thrown up by the inquiry and knew very well that the secretary of state does not order military operations. Someone who thinks that is the secretary’s mandate shouldn’t fill those shoes.