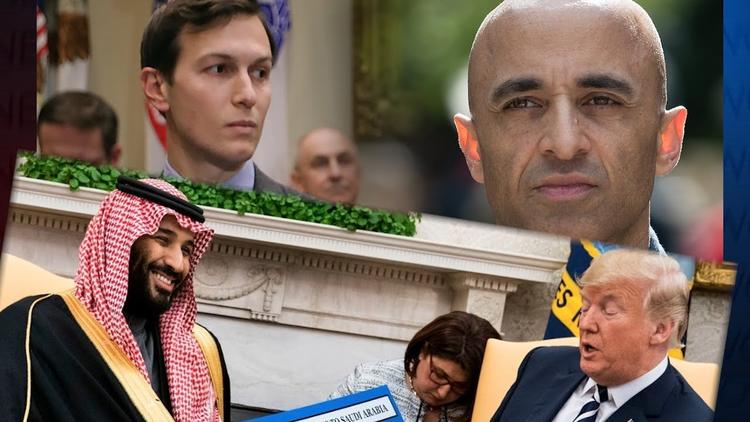 Former Israeli prison guard at the notorious Ktzi’ot Prison camp for Palestinians and now editor-in-chief of the Atlantic, Cpl. Jeffrey Goldberg, breathlessly reported that Saudi Crown Prince Mohammed Bin Salman told him that both the Jews and the Palestinians have a right to their own state.

Goldberg parsed the phrase “have a right” with regard to Jews as unprecedented in an “Arab” leader. He completely ignored the Palestinian right.

Goldberg sniffed that Arab leaders have “tired” of the Palestinians and so don’t give a fig about Israel shooting down unarmed protesters at the Gaza border. This is blaming the victims on a Himalayan scale. Israeli intransigence, land-grabbing and vindictiveness have made everyone tired of the Palestinian plight, which is the intended effect— just as Nazi tratment of the Jews in the 1930s was intended to turn Jews into inconvenient flotsam that no one would care about, so that in the end a ‘solution’ could be implemented (the comparison is only to this tactic of making people stateless and unwanted).

But although Bin Salman may be stating it more baldly than usual, there is nothing unprecedented about what he said except in Goldberg’s feverish Jewish-nationalist imagination. The Camp David Accords between Egypt and Israel accord Israel a right to exist (you can’t have a long-term treaty with a non-entity), and the same implication is there in the Jordanian-Israeli Peace Treaty. The PLO recognized Israel in the 1990s.

In 2002, King Abdullah of Saudi Arabia put forward a plan adopted by the Arab League that would recognize Israel inside pre-1967 borders in return for an Israeli recognition of Palestine in the West Bank and Gaza. Then Israeli prime minister Ariel Sharon, an expansionist who tried to grab Sinai and had his eye on Jordan’s Ghor Valley, pissed all over the proposal. His successors have put little Gaza under permanent blockade and have grabbed up more and more of the Palestinian West Bank, flooding 800,000 Israeli squatters onto it in direct violation of the international law of military Occupation. The Arab League plan has been reaffirmed twice, most recently in 2017.

The Israeli myth of Arab intransigence is a smokescreen for determined Israeli expansionism. Goldberg and his ilk still hate Lebanon’s Hizbullah because it forced an Israeli withdrawal from its 18-year occupation of South Lebanon and could not be crushed by a 2006 massive Israeli aerial bombardment of Lebanon, which wiped out all of the country’s economic progress since 1989.

The difference between Bin Salman and his late uncle King Abdullah is that the uncle was a cannier negotiator. He wanted something for admitting Israel’s right to exist, to wit, a decent life for the stateless, occupied Palestinians in their Apartheid limbo.

Bin Salman shows no such spine and is worldly enough to know that the Israelis are not going to let the Palestinians have a state and are going to keep them in a stateless condition of near chattel for as long as the world will put up with it (apparently for a very long time). Goldberg says he is for a 2-state solution, but people who glibly take that position are just holding a fig leaf before the nakedness of their cynicism. There is no longer a possibility of a two state solution.

So what is really being reported is that Bin Salman is happy enough to work with the Likud government in Israel and to ignore its slow ongoing crushing of the Palestinians, as long as Saudi Arabia gets Israeli and international Jewish cooperation on its finances, diplomacy toward the US, and attempts to isolate Iran and its allies.

This self-serving position is just harsh Realism and is light years away from King Abdullah’s peace plan, which genuinely had a shot of resulting in peace. What MbS is promising is more war, more belligerence. He is planning to do to the rest of the Middle East what he has done to Yemen, and is inviting the Israelis to join with him in the carnage. Goldberg, who was positively gleeful about the destruction of Iraq, is watering in the mouth.

TYT: Is That Jared Kushner In Your Pocket Or Are You Just Happy to Lock Up Dissidents?