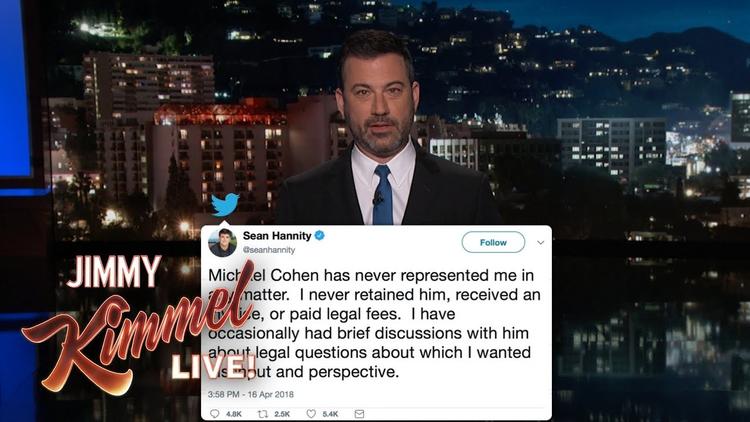 The problems at Fox Cable “News” go way beyond Sean Hannity. But he is a major problem. For him to go on air and defend attorney Michael Cohen numerous times without so much as mentioning that Cohen is his legal adviser is the height of journalistic corruption.

Nor is it only Fox that hides the financial and personal interests of its celebrity commentators from the public.

In 2008, in a story that is unremembered and unheeded, The New York Times blew the whistle on a Pentagon scam to place ex-officers on CNN as Iraq War and security commentators, while never disclosing their ongoing ties to the US military or their ties to companies making money off the war. There is no reason at all to believe that CNN has cleaned up its act. Fox is guilty of the same sort of interlocking directorates strategy in “news” provision.

The information system in the United States is mostly broken. 24 hour cable news is just a pretext for earning advertising dollars and therefore mostly presents infotainment or cheap panel debates (mostly by partisans or people without any obvious credentials or special knowledge).

A handful of corporations own all of the major television news outlets. Even at the level of more trusted local stations, Sinclair has been buying them up and using onerous contracts with the anchors to force them into reciting pro-Trump propaganda.

Fox Cable News is a project of far rightwing Australian-origin billionaire Rupert Murdoch to push television news in the United States in the direction of white nationalism, white grievance, romanticism about the business class, defense of neocolonialism, and punitive attitudes toward workers and the dissident middle class. It has a firm editorial line, which is set in explicit memos to on screen presenters. Its stars have been serial sex abusers like Roger Ailes and Bill O’Reilly. Hannity has emerged as the last Great White Hope among the bullies of cable news, and that he is corrupt and dishonest should come as no surprise.

What to do about all this? Most of the people reading this don’t watch Fox anyway (and by the way there are some excellent reporters employed by this corporation and the local stations are often quite good).

The only thing that has been shown to work is a consumer boycott of advertisers. That is what got rid of the odious O’Reilly.

Note that I am not calling for a boycott of Hannity advertisers because I dislike him personally or because I disagree with his politics.

He has revealed himself to be corrupt and dishonest with his viewers on a basic level that should be unacceptable even in a generally corrupt company like Fox Cable News.

Of course, ideally, the Democratic Party would be planning for a reform of the FCC once it takes back over Congress. The poor things don’t seem to realize that the Reagan dissing of the Fairness Doctrine was one of the trucks that ran over the Democrats after 1981.

But in the short term, it is up to us. The lists I could find for advertisers on Hannity were old, from last year when people were disgusted by his support for that kooky right wing nutjob Judge Roy Moore.

This is different, because it speaks not to political views or values, about which we can disagree, but to professional ethics. No one should be on air who speaks about subjects on which they have personal interests, and who does not disclose them.

The Late Show with Stephen Colbert: “Sean Hannity Forgot To Mention Something…”