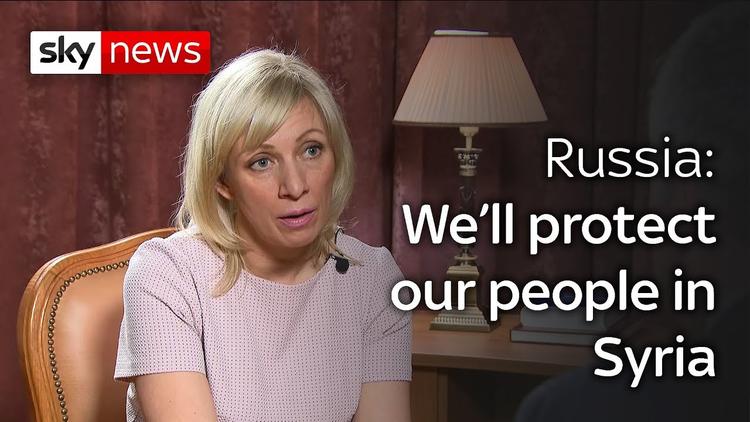 The UK-based Arabic language daily, al-Arabi al-Jadid (a secular, left-leaning newspaper helmed by Azmi Bishara from Qatar) reports on the responses of Syria and its allies to sabre-rattling from Trump and from the UK and France.

A key advisor to Ali Khamenei, Iran’s clerical leader, is in Syria to take stock after the military success in retaking the East Ghouta neighborhood near Damascus from Salafi Jihadi rebels. The latter part of that campaign, last Saturday, allegedly involved the use by the Bashar al-Assad government of a barrel bomb loaded with chlorine and a nerve agent, which killed some 70 persons, mostly noncombatants and including children. The gas attack has provoked Donald Trump and the governments of Theresa May in the UK and Emmanuel Macron in France to plan for a possible punitive set of air strikes on Syrian air force facilities.

The Iranian adviser, Ali Akbar Velayati, said in a news conference with Syrian president Bashar al-Assad that Syria is more prepared than in the past to face what is coming. He charged that the United States directed the launching of the civil war in Syria and took part in it extensively. (The first part of this allegation is not true; the Syrian uprising of 2011 was indigenous, not a CIA covert operation. Once the regime turned it into a civil war by using massive military force on civilian, peaceful protesters, the US did give some billions in aid via Saudi Arabia to some 40 “vetted” guerrilla groups it said were unconnected to al-Qaeda or extremism. The US role appears to have been much larger than the press reported at the time, but Russian and Iranian investments clearly outweighed it in the end in any case.) What’s left of the Iranian Revolution of 1979 is now a mere handmaiden of secular Baath dictators and neo-imperialist Russian oligarchs.

Velayati dismissed Trump, whom many in the Middle East had initially admired on his election, as having become a mere laughingstock.

Bashar al-Assad in his remarks warned that a Western strike on his country would accomplish nothing but to destabilize regional security. He complained that every victory Syria gained was met with Western cries and movements in hopes of altering the course of events. They are the ones, he said, who are harming international peace and security.

Meanwhile, a Russian spokesman confirmed that Russian and US military officers were using intensively the “deconfliction” telephone line to ensure that no step is taken that would spark conflict between the two powers.

BBC monitoring paraphrases a column by Alexander Atasuntsev and others at the liberal business daily RBC . He quotes retired Col. Andrei Payusov as predicting that any US strikes on Syria would be “superficial” and affect only “minor” targets announced in advance. He complained that this sort of US showboating aims at trying to reverse its weakening position in the Middle East brought about by Russian successes. He said that the US would choose targets and bases where there was no chance of hitting Russian troops. Other Russian experts quoted in the article, however, could not rule out the possibility of a clash between the United States and the Russian Federation in Syria.

Sky News: “Russia warns it will protect its people in Syria”