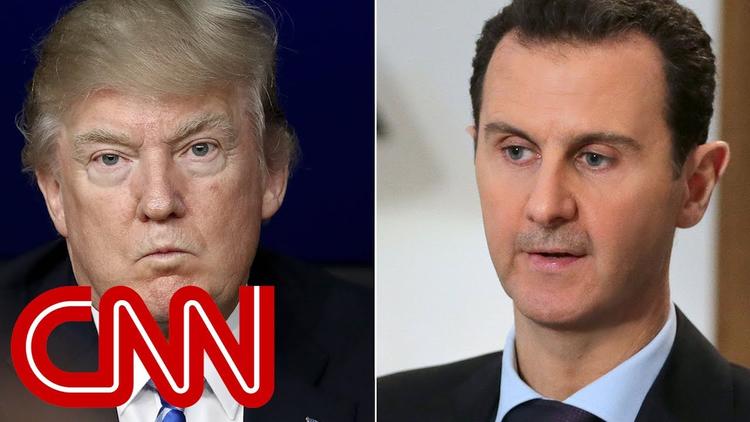 Iraq’s foreign ministry came out strongly against the US, British and French missile strikes on Syria. In a statement issued Saturday, the ministry called the attacks “an extremely dangerous step”that could result in a weakening of regional security.

Spokesman Ahmad Mahjub said, “The ministry underlines the necessity for a political solution that meets the aspirations of the Syrian people.” Strikes like those launched Friday, he said, “give terrorism a new opportunity to spread after its defeat in Iraq and its substantial retreat in Syria.” He said Iraq calls on the Arab League to take a clear stance against this dangerous development.

The Iraqis are clearly afraid that the North Atlantic intervention will embolden ISIL/ Daesh to start back up its operations.

Iraq is also worried about instability in Syria that might affect its border with that country. Iraqi government spokesman Saad al-Hadithi told Alarabiya, “The outbreak of conflict in Syria in 2011 was the principle cause of the rise of Daesh (ISIL) and its spread and its entry into Iraq in the middle of 2014, and the continuation of strife.” He added, “The intervention of numerous countries in Syria played a role in nourishing Daesh (ISIL), and we see a necessity for finding a political solution in Syria to achieve stability and to finish off the remnants of Daesh in the regions neighboring Iraq.” He said that Iraq’s focus was to avoid doing anything that might help ISIL remain in eastern Syria.

He said that Iraq had a policy of non-intervention in the internal affairs of Syria and sees foreign interventions there as having worsened the situation.

The Iraqi government tilts to Iran, the leader of which, Ali Khamenei, denounced the strikes as “a supreme crime” and warned that they would fail, just as the 2003 US invasion of Iraq failed. Iraq also does have some 5000 US military personnel at an Iraq Command in Baghdad, who were key to the defeat of ISIL in the Sunni Arab north of the country and are still helping with mop up operations. Also key to the fight, however, were Shiite militias and the Iranian Revolutionary Guards Corps.

While it is not surprising that the ruling Da`wa (Islamic Call) Party took a more subdued version of the Iranian position, it appears that even Sunni Iraqi parties are condemning the move. Given that the al-Assad government was fighting the hard line Saudi-backed Army of Islam in Douma when it deployed the chlorine gas, it may be that traumatized Iraqi Sunnis just have no sympathy with the extreme religious Right.

In accordance with Syrian, Russian and Iranian propaganda, some some Iraqi newspapers attempted to cast doubt on the reality of the Douma chem attack or to muddy the waters as to its provenance. They complained that the reports of the use of chemical weapons is coming out of Israeli, Western and Gulf media, and observed, “not again!” The reference is the the 2003 false allegations by the Bush administration that Iraq had chemical weapons stockpiles or “weapons of mass destruction” (a propaganda term), which were the pretext for the US invasion of Iraq.

In the Egyptian parliament, MP Emad Saad Hamouda said that the Tripartite aggression on Syria depended on the same sort of lies that had been deployed by the Bush administration in its attack on Iraq in 2003. He said that Egypt rejects the imposition of any foreign countries’ policies on Syria, with which Egypt has long and close associations. (Since the government of Abdel Fattah al-Sisi overthrew a Muslim Brotherhood government in 2013 and then declared most of the religious Right terrorists, and since the secular, putatively socialist Baath Party in Syria has been facing a rebellion led by the Muslim Brotherhood and other elements of the religious Right, the Egyptian government and press have tilted toward Bashar al-Assad in recent years. This development has sparked some disputes with Egypt’s financial patrons in Saudi Arabia, the UAE and Kuwait, who also hate the populist Eygptian Muslim Brotherhood but who have funded hard line Syrian Salafi guerrillas in a bid to overthrow the al-Assad regime).

These reactions show how profoundly the George W. Bush administration damaged American credibility on the world stage by its gotten-up war on Iraq. At a time of rising China, resurgent Russia, profound doubts about President Trump, and the rise of algorithmic fake news on social media, the United States cannot afford this major and lasting hit to its credibility. Those Americans who are now thinking more positively about Bush (why?) should reconsider.

Washington keeps hoping that post-American Iraq will emerge as a strong US ally in the region. The reality is mixed. Iraq’s Shiite elites, along with most Kurds and Sunnis, are happy to ally against al-Qaeda and ISIL and other Sunni/Wahhabi extremist groups. But Iraqi Shiites and Kurds are not willing to line up against Iran or Iranian allies like Baathist Syria. That is a key contradiction in US policy in the region, to the extent that there is any policy.

Nic Robertson, CNN: “Why war in Syria is so complex”