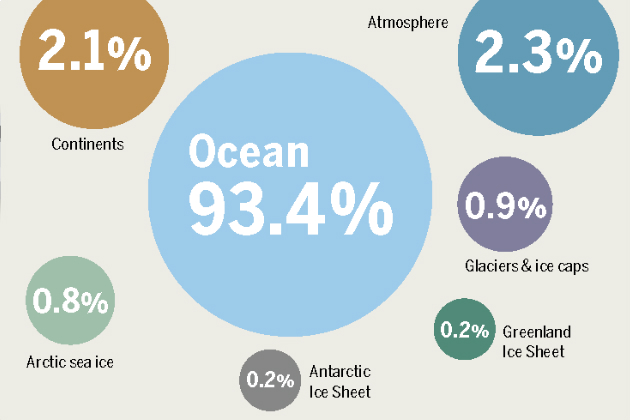 Without the ocean, climate change would proceed far more quickly. The massive volumes of water in the seas greatly influence the changes occurring in our atmosphere.

Infographic from the Ocean Atlas – Where Does the Warmth Go?(Cutout of the graphic below) – Creator: petraboeckmann.de. This image is licensed under Creative Commons License.

Climate change, particularly global warming, is mainly caused by the CO2 we release into the atmosphere by burning fossil fuels like coal and oil. Since the beginning of industrialization in the 19th century the amount of CO2 in the atmosphere has risen by 40 percent. CO2 is a greenhouse gas. If not for the ocean, temperatures would be even higher than they are now. That is because the ocean currently absorbs a quarter of the CO2 released into the air. 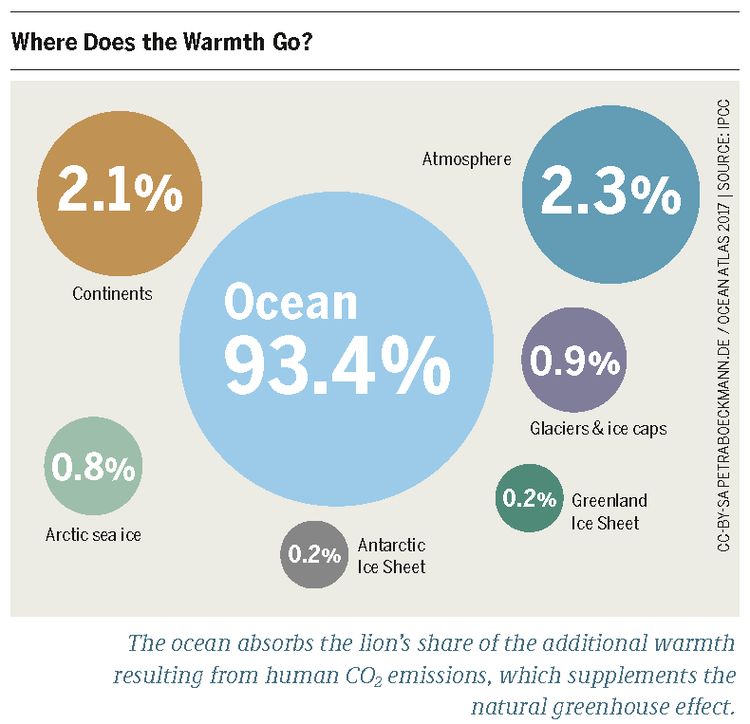 In the Labrador Sea and Greenland Sea as well as in regions near the Antarctic coast, large quantities of surface water sink into the deep sea where the CO2 is stored for long periods of time. The lion’s share of the CO2 stored in this manner since the start of the Industrial Revolution will take centuries to return to the surface of the ocean again. Part of it will remain fixed in the sediment of the sea floor. That is how the ocean significantly slows climate change. The ability of the ocean to sequester CO2 is not unlimited, though, and it varies. For example, while CO2 absorption in the Southern Ocean declined between 1980 and 2000, it has increased in the years since. The ocean does more than absorb a considerable amount of our excess CO2 – it also soaks up nearly all of the additional warmth resulting from the manmade greenhouse effect. 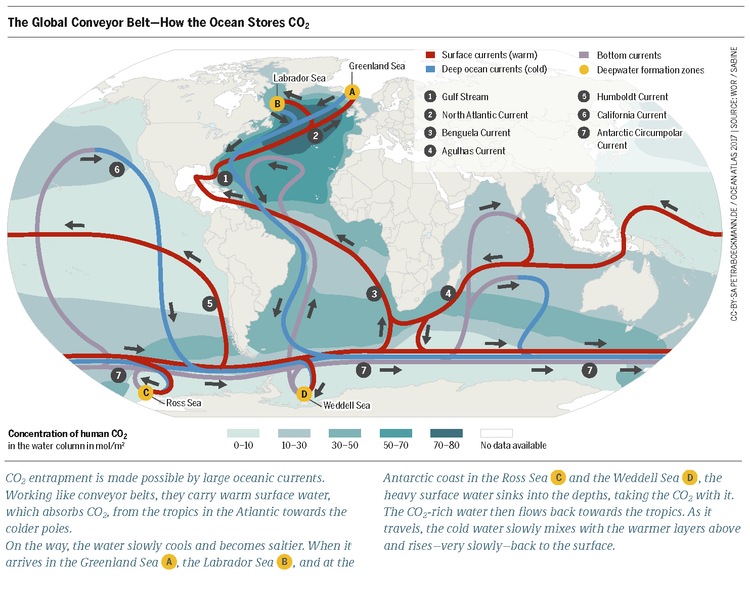 Creator: petraboeckmann.de. This image is licensed under Creative Commons License.

Over the last 40 years it has absorbed an astounding 93 percent of the excess heat – increased atmospheric temperatures are attributable to just three percent of this additional thermal energy and would be much greater if not for the ocean. The extra warmth is essentially hidden in the ocean, where it slowly spreads through the depths. Because of this, the surface temperature only increases at a snail’s pace.

But all this has a price. Absorbing excess CO2 leads to the progressive acidification of the ocean, while absorbing excess heat contributes to the rising sea level and troubling changes in marine ecosystems. And the warming of the oceans contains another risk: positive feedback loops. For example: when the rate of evaporation on the ocean surface increases, it produces more water vapor, which causes temperatures to rise, which causes the rate of evaporation to increase. 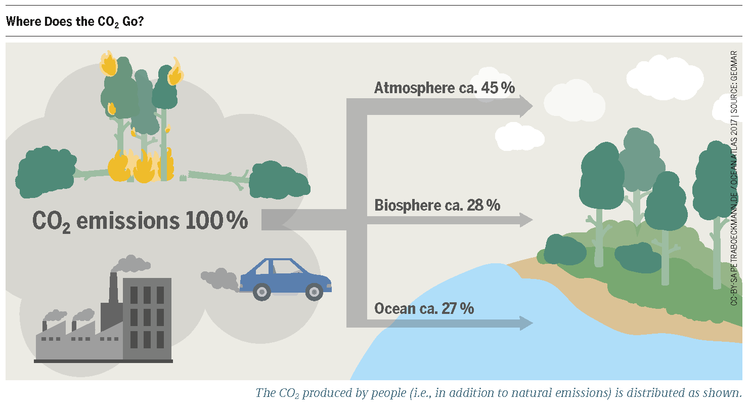 Creator: petraboeckmann.de. This image is licensed under Creative Commons License.

That’s because water vapor is a greenhouse gas like CO2 – in fact, it is even more effective than CO2. In itself, that’s not a bad thing: around two-thirds of the natural greenhouse effect, which has made the Earth inhabitable for millions of years, is caused by water vapor; only a quarter of it is caused by CO2. But if we release too much CO2 into the atmosphere, the feedback loop described above greatly amplifies its effects.

Another positive feedback loop is created by the melting of sea ice, which is also caused by rising temperatures. Arctic and Antarctic sea ice acts like a protective shield – it reflects up to 90 percent of the sun’s rays. But because of the rising temperatures, the sea ice is continually shrinking. And where there’s no ice in the ocean, there’s water. Since water is dark it absorbs sunlight rather than reflecting it – up to 90 percent of it. As it does so, it warms up. The result: more ice melts. These positive feedback loops can accelerate global warming in ways that are difficult to predict – one more reason not to further burden the ocean system. For this reason, meeting the goal of limiting global warming to two degrees agreed, upon at the Paris Climate Conference, is essential.