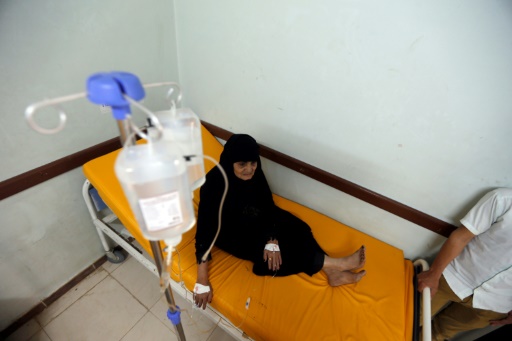 Paris (AFP) – War-torn Yemen, caught in what the UN terms the world’s worst humanitarian crisis, risks a resurgence of cholera that could infect millions as the rainy season advances, researchers warned Friday.

AFP/File / Mohammed HUWAIS. A Yemeni woman suspected of being infected with cholera receive treatment at a makeshift hospital in Sanaa on July 13, 2017.

These could include vaccination, distributing equipment for filtering and disinfecting water, and repairing crumbling sanitation infrastructure.

Based on data from previous outbreaks, the team calculated that 54 percent of districts in Yemen could be affected by an epidemic flare-up in 2018, “totalling a population at risk of more than 13.8 million.”

“We thus make an urgent call for action on the part of local officials, donors, and international partners, to mitigate the risk of a new cholera epidemic wave in Yemen, which would certainly further weaken a highly vulnerable population.”

Some 10,000 people have been killed since March 2015 in the conflict between Saudi-backed pro-government forces and Iran-backed Huthi rebels in Yemen.

According to the United Nations, two in three Yemenis — more than 17 million people — do not know where their next meal will come from.

Two million people are displaced, and fewer than half of health facilities are still functioning.

For the study, researchers looked for evidence of a link between cholera and rainfall in research published between 1970 and 2018. They also examined the history of cholera outbreaks in Yemen from 1971.

The data showed an association between higher rainfall and cholera prevalence, they said.

Yemen is in the grip of a cholera outbreak that started in 2016 after a five-year lull.

Striking in two main waves — in 2016 and in 2017 — it has been the largest documented cholera epidemic of modern times, with over 1.1 million people infected and more than 2,300 deaths.

This meant the return of the rainy season in 2018 could unleash a devastating third wave, said the researchers.

Speculating on the reason for rainfall link, the team said conflict reduces access to safe water drawn from deep underground. When it rains, people will rely on surface waters, possibly contaminated by war-damaged wastewater systems.

The data also showed an increase in cholera risk during the Muslim holy month of Ramadan, said the researchers.

This could be because people gather in large groups to share food, often obtained from street vendors.

“These findings suggest that a large-scale campaign for hygiene education and public health information should be implemented during the 2018 Ramadan, possibly involving Imams to deliver these messages,” said the team.

According to the World Health Organization, cholera infects 1.3 million to four million people every year and kills an estimated 21,000-143,000 — mainly in poor countries.

Cholera, which causes potentially deadly diarrhoea, is contracted by ingesting food or water contaminated with a bacterium carried in human faeces and spread through poor sanitation and dirty drinking water.

Left untreated, it can kill within hours.