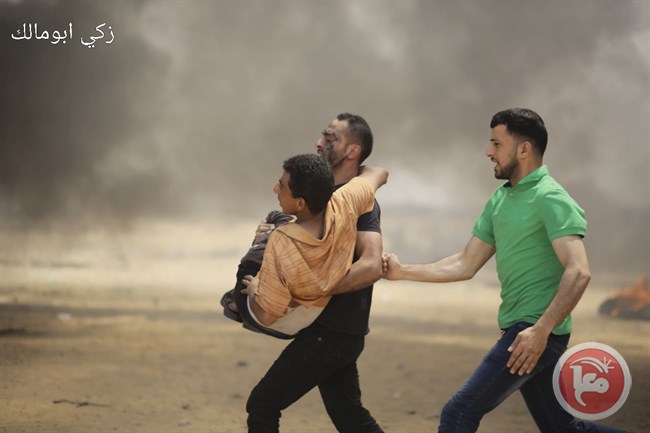 GAZA CITY (Ma’an) — At least 55 Palestinians have been killed and more than 2,700 others injured alongside the eastern borders of the Gaza Strip on Monday, according to the Palestinian Ministry of Health in Gaza.

The latest death toll was reported by the ministry at 9:30 p.m. The ministry added that 2,771 people were injured.

Six of the slain Palestinians were minors under the age of 18, including one girl.

According to the ministry, at least 1,204 Palestinians were injured with live ammunition. 79 were injured in their necks, 161 in their arms, 62 in the back and chests, 52 in their stomachs, and 1055 in their lower limbs.

At least 203 of the injured were reported to be children, and 78 women.

The Palestinian Red Crescent said that until 13:15 p.m., their teams treated 390 injuries, 253 of which are with live ammunition, 68 tear-gas inhalation cases, 28 shrapnel injuries and 41 hit with tear-gas bombs; 76 of the injuries were in the northern Gaza Strip, 134 in Gaza City, 41in the central Gaza Strip, 86 in Khan Younis and 68 in Rafah City.

Several protesters cut the Israeli border fence and reportedly attempted to enter the other side, as Israeli military forces were heavily deployed alongside the borders, constantly opening fire.

Palestinians headed to the “return camps” early Monday stationed along the border, setting fire to tires near the border fence.

In Khan Younis, in the southern Gaza Strip, Israeli forces had thrown flammable material at the return camps in an attempt to prevent youths from approaching borders.