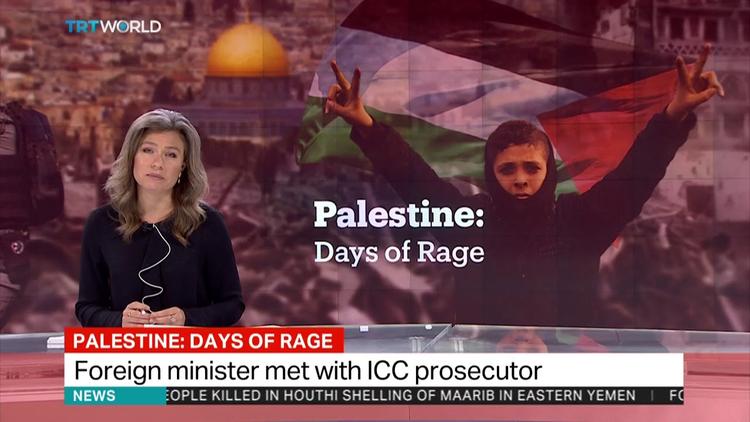 Palestine has submitted a formal referral to the International Criminal Court in the Hague over Israeli sniping with live fire at peaceful Gaza protesters this spring, which killed some 60 persons and literally wounded thousands.

Palestine, which is a cautious and timid government, had earlier declined to go to the ICC, in hopes instead of reaching a negotiated settlement. The Trump decision to recognize Jerusalem as Israel’s capital, however, forestalled a negotiated settlement on that issue. Israel’s illegal flooding of its citizens onto Palestinian property in the West Bank and refusal to negotiate any freeze in squatter settlements has also convinced Palestine that the US-Israeli “peace process” is a cover for slow genocide. Ironically, it was Trump’s lack of diplomatic grace that in large part impelled this step.

TRT World: “Palestine to submit a referral to ICC: Interview with Dr.Anis Qasim”

Palestine (or the Palestine Authority) was established in 1994 as a result of the Oslo peace accords signed by Palestine Liberation Organization chairman Yasser Arafat and Israeli prime minister Yitzhak Rabin. It held elections in 1996 and 2006. The PA was recognized as having authority over Gaza and Areas A and B of the West Bank, and the Israelis had promised at Oslo in 1993 to turn over all of the West Bank and Gaza to Palestine by 1998. Instead, they flooded hundreds of thousands of Israeli squatters into the Palestinian West Bank and ultimately reneged entirely on their Oslo commitments. In 2013 the PA began styling itself the State of Palestine after UN recognition.

This spring, activists rallied near the fence erected by the Israelis to cage Palestinians into Gaza, but none of them appears actually to have crossed the fence into what Israel considers its territory (Israel and Palestine have no formal recognized borders with one another, only armistice lines that Israelis have seldom honored). Some 70 percent of Palestinians in Gaza were expelled in 1948 or 1967 from what is now Israel in a systematic Israeli campaign of ethnic cleansing, after which Jewish colonialists usurped Palestinian homes, land and other property and have kept their victims cooped up in Gaza ever since. Palestinians in refugee camps demanded to be allowed to return home.

Shooting down unarmed people on their own territory when they posed no immediate physical danger to any Israeli is a war crime in international law. In fact, a war crime pursued so systematically after a while becomes a crime against humanity.

The International Criminal Court began functioning in 2002, when the Rome Statute came into effect. The Statute is an international treaty now ratified by 123 countries, which attempts to strengthen the prosecution of war crimes where local courts cannot or will not do so.

So how could a Palestinian referral work? In the law, issues of standing and jurisdiction have to be settled before there is even a court case. The Israelis are denying that the ICC has jurisdiction and that the Palestinians have standing. They are wrong, and here is why.

In 2012, the United Nations General Assembly bestowed on Palestine (as created by virtue of the Oslo Accords, which Israel signed onto), recognition as a “non-member observer state.” This is the same status enjoyed by the Vatican. The vote made Palestine a UN observer and recognized it as a sovereign state.

That vote in turn gave Palestine the standing to join the International Criminal Court, which it did in 2015. Israel has refused to sign the ICC or recognize the body’s jurisdiction over Israeli territory.

So, Palestine is a member of the ICC and has been recognized as a state by the UNGA, and it certainly has standing to take this issue to the court.

How about jurisdiction? The Israelis are correct that the ICC does not have jurisdiction over crimes committed on Israeli territory, since Israel is not a signatory. The only way for the ICC to pursue a case in Israel proper would be for the United Nations Security Council to refer it to the court on the grounds that the issue was a threat to world order. The UNSC took this step with regard to Libya, and Moammar Gaddafi and his son Saif were found guilty at the court of crimes against humanity, which helped the Libyan people in their quest to overthrow the brutal and erratic regime.

The ICC does, however, have jurisdiction over war crimes and crimes against humanity committed in Gaza and the West Bank. So the shooting dead of Palestinian protesters on Gaza soil by Israeli army snipers certainly would lie within its jurisdiction.

In short, Israel doesn’t have a legal leg to stand on here. In the past, Prime Minister Binyamin Netanyahu has threatened to simply destroy the ICC if it dares move against any Israeli official. Israel certainly has levers it can pull against the funding of the court and it can target individual justices in various ways (Netanyahu invented many techniques later made famous by Trump). Whether this simple bullying can succeed is unclear.

The ICC does not charge governments with crimes, only individuals. If specific Israeli army snipers can be identified who shot dead unarmed civilians in Gaza, they could be tried, even in absentia. Further, the Israeli chief of staff and the prime minister, who have vocally supported the Gaza massacre, could be charged, as the responsible authorities. If they were convicted, they would experience difficulty traveling internationally, though obviously it would be difficult for the court itself to have them arrested. Their political enemies in Israel would certainly be emboldened against them, however.

In the past, the Israelis have also threatened tit for tat, saying that if Palestine brought charges against Israeli officials of war crimes, Israel would initiate similar charges against old PLO guerrillas guilty of past attacks on civilians.

This threat could be carried out by Israeli courts, but, ironically enough, not at the ICC. Since Israel is not a signatory it cannot refer cases. And, if the attacks occurred in Israel proper, the ICC would not have jurisdiction over them. Moreover, by now few State of Palestine officials could be so charged.

The really huge implication of these developments, however, had to do not with the Gaza Massacre of 2018, but with Israeli squatter settlements on the West Bank. They constitute a violation of the Geneva Accords of 1949 on the treatment of populations in militarily occupied territories, and are so arranged as to fall under the crime of Apartheid as defined in the Rome Statute. If the ICC takes up that issue, it could reach decisions with far-reaching implications for Israeli policy. Again, even if the decision would be difficult to implement, it would certainly result in growing sanctions on Israel internationally.