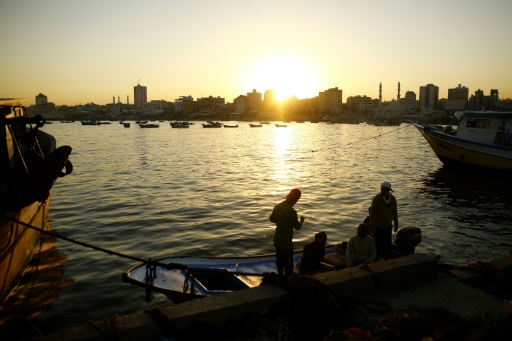 Few details were given on the plans, but organisers said the boat would depart on Tuesday at 11:00 am (0800 GMT) carrying patients needing medical care, students and job-seeking university graduates.

The boat also brings “dreams of our people and their aspirations for freedom”, organiser Salah Abdul-Ati said in a press conference at Gaza City’s port on the Mediterranean coast.

He called on the United Nations and other international bodies to protect the boat leaving from the enclave run by Islamist movement Hamas.

Organisers said it would be the first attempt of its kind from the Gaza Strip.

Its intended destination was not announced.

Boats off the strip are generally limited to six nautical miles offshore, and the Israeli navy regularly fires warning shots at Palestinians who breach it.

The boat would likely face long odds at making it past Israeli forces.

The plan comes ahead of the eighth anniversary on Thursday of a deadly raid on Turkish-registered Mavi Marmara — part of a flotilla of six vessels seeking to break Israel’s blockade and enter Gaza.

Nine Turkish activists were killed in the operation, and another died in hospital in 2014.

Mass protests and clashes began on March 30 along the fence separating Gaza and Israel.

At least 119 Palestinians have been killed by Israeli fire since the protests and clashes broke out, according to figures from Gaza’s health ministry.

No Israelis have been killed during that time.

Low-level demonstrations along the border have continued since protests peaked on May 14, when at least 61 Palestinians were killed as tens of thousands of Gazans protested the US transfer of its embassy in Israel from Tel Aviv to Jerusalem.

Israel says its actions are necessary to defend the border and stop mass incursions into its territory.

It accuses Hamas, with whom it has fought three wars since 2008, of seeking to use the protests as cover to carry out violence.

The Gaza Strip has been under Israeli blockade for more than a decade.

Egypt has also kept its border with Gaza largely closed in recent years, but has opened it for the entire Muslim holy month of Ramadan.

Featured Photo: AFP/File / MOHAMMED ABED. Boats off the strip are generally limited to six nautical miles offshore, and the Israeli navy regularly fires warning shots at Palestinians who breach it.