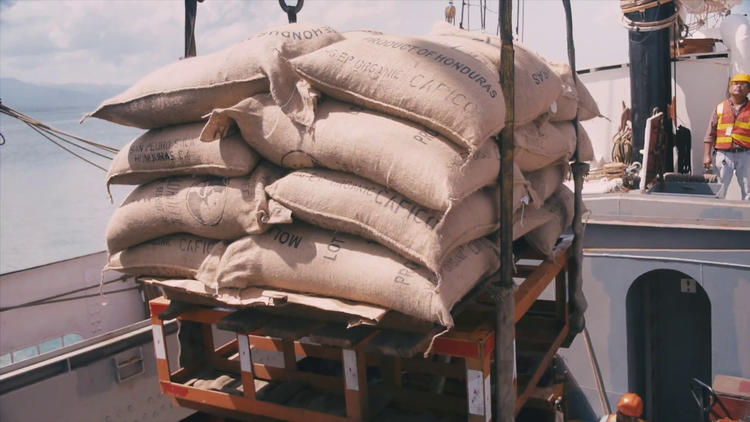 Melbourne (The Conversation) – On May 10, the 43.5-metre schooner Avontuur arrived in the port of Hamburg. This traditional sailing vessel, built in 1920, transported some 70 tonnes of coffee, cacao and rum across the Atlantic. The shipping company Timbercoast, which owns and operates Avontuur, says it aims to prove that sailing ships can offer an environmentally sustainable alternative to the heavily polluting shipping industry, despite being widely seen as a technology of yesteryear. 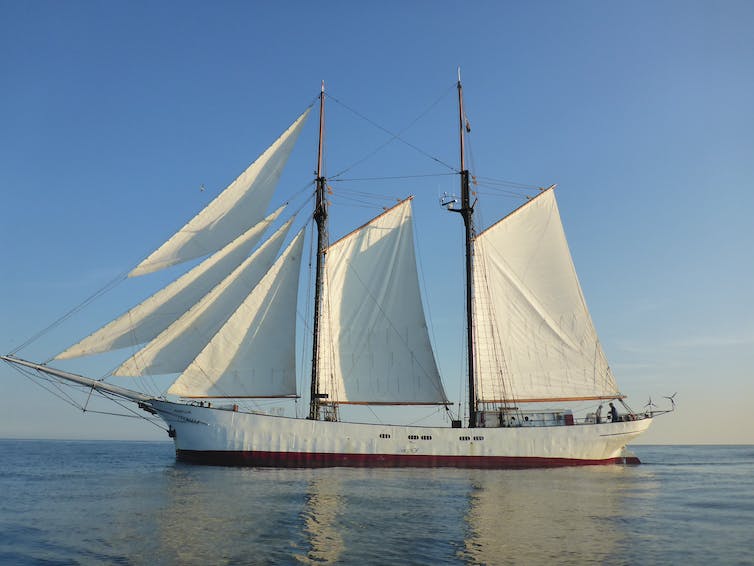 Similar initiatives exist across the world. In the Netherlands, Fairtransport operates two vessels on European and transatlantic routes. In France, Transoceanic Wind Transport sails multiple vessels across the English Channel and Atlantic Ocean, and along European coasts. The US-based vessel Kwai serves islands in the Pacific. And Sail Cargo, based in Costa Rica, is building Ceiba, a zero-emission cargo sailing ship.

Transporting cargo by sail is both a practical response to climate change and a contribution to a larger debate.

These initiatives have an environmental objective: transporting cargo without generating greenhouse gas emissions. But are they really a viable alternative to today’s huge fossil-fuelled maritime cargo transport industry?

On April 13, 2018, the International Maritime Organization, the United Nations body that regulates shipping, agreed for the first time to limit the sector’s greenhouse emissions. It’s targeting a 50% reduction by 2050 (relative to 2008 levels), with the aim to phase out emissions entirely.

This was a breakthrough, given that both the 1997 Kyoto Protocol and the 2015 Paris Agreement exclude international shipping (and international aviation) from emissions targets, because these are so hard to attribute to individual countries.

Conventional seaborne cargo transport is relatively energy-efficient. It emits less greenhouse gas per tonne-kilometre (one tonne of goods transported over one kilometre) than transport by train, truck or plane. But because 80-90% of all goods we consume are transported by sea, the total emissions of the shipping industry are immense.

According to figures from the International Maritime Organization (IMO), shipping accounts for 2-3% of global emissions – outstripping the 2% share generated by civil aviation.

As the global demand for goods increases, so does the need for shipping. As a result, the IMO has projected that the sector’s greenhouse emissions will grow by anything between 50% and 250% between 2012 and 2050, despite improvements in fuel composition and efficiency. More worryingly, a commentary on that report in Nature Climate Change warns that “none of the anticipated shipping scenarios even approach what is necessary for the sector to make its ‘fair and proportionate’ contribution to avoiding 2℃ of warming”.

A recent report commissioned by the European Parliament raises further alarm bells, underscoring the fact that the sector’s huge growth is likely to swamp any carbon savings that come from improved operations. On top of this, the significant progress made in other industries means that the relative share of greenhouse gas emissions from cargo shipping is likely to increase from the current 2-3% to 17% by 2050.

The OECD International Transport Forum is less pessimistic. It projects a 23% increase in the sector’s emissions between 2015 and 2035 on current trends, but also argues that it will be possible to decarbonise maritime transport altogether by 2035, through the “maximum deployment of currently known technologies”.

These emissions-reducing propulsion technologies include kites, solar electricity, and advanced sail technology. Some of them, such as Flettner rotors, are already in use. But these will not be scaled up and become viable unless there is strict regulation, even if some shipping companies have taken steps to reduce their emissions ahead of a binding IMO target. Electricity-propelled container barges operate in Belgium and the Netherlands.

Meanwhile, the IMO faced a tricky balancing act in juggling the priorities of different countries. Climate-vulnerable nations such as the Marshall Islands want shipping emissions to be cut entirely by 2035. The European Union has proposed a reduction of 70-100% by 2050, while emerging economies such as Brazil, Saudi Arabia and India have argued against any emissions target at all. Despite these differences, the IMO did agree on a 50% reduction target by 2050 in April 2018.

Given the relatively small capacity of sailing ships, it is expensive and labour-intensive to ship cargo this way. But despite these limitations, support for sail cargo initiatives is growing. A consortium of small North Sea ports, for example, will “create sail cargo hubs in small ports and harbours, giving local businesses direct access to ethically transported goods”.

These initiatives signal the revival of sail cargo with an explicit environmental agenda, although this effort is dwarfed by the scale of the global shipping industry. But while they don’t stack up in logistical terms, these voyages can help us see the possibilities for a world without fossil fuels. Sail cargo aims to rethink not only the means of propulsion for cargo vessels, but the entire scale, economy and ethics of cargo transport.

Traditional sailing vessels like Avontuur will not be able to compete with conventional cargo vessels on speed, scale or cost. But they help us focus on the underlying issue. We ship too much, too often and too far. The scale of shipping is unsustainable. That is why we need a change of mindset as much as a change of technology.

Sail cargo initiatives raise awareness about the devastating environmental effects of conventional cargo shipping. And they do so by showing that an alternative is possible. Indeed, it has been around for thousands of years.

Christiaan De Beukelaer is a Lecturer in Cultural Policy in the School of Culture and Communication at the University of Melbourne. He teaches into the MA in Arts and Cultural Management and is a Research Associate of the Research Unit in Public Cultures.