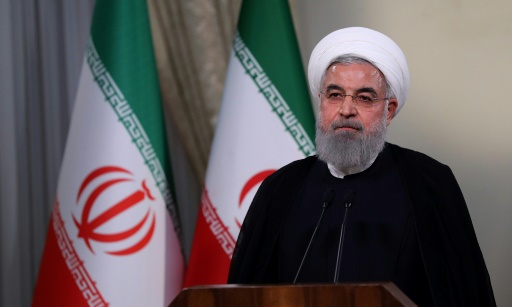 Tehran (AFP) – Iran said it will hold talks with signatories to a nuclear deal after US President Donald Trump’s decision Tuesday to withdraw from the accord, which it branded “psychological warfare”.

He said he would discuss Iran’s response with the other parties to the 2015 deal — Britain, France, Germany, Russia, China and the European Union — before announcing a decision.

Speaking on state television, Rouhani described Trump’s decision as “an act of psychological warfare against Iran”.

“I have instructed the Iranian Atomic Energy Organisation to take the necessary measures for future actions so that if necessary we can resume industrial enrichment without limit,” he said.

“We will wait several weeks before applying this decision. We will speak with our friends and allies, the other members of the nuclear agreement.”

Rouhani said Iran had respected all its commitments under the nuclear agreement — as verified by international inspectors.

“We see today which country does not respect its international commitments.

“The only regime that supported the position of Trump is the illegitimate Zionist regime,” Rouhani added in reference to Israel.

The Iranian president appeared on the state broadcaster just minutes after Trump announced the historic decision to withdraw the United States from the agreement — a move strongly opposed by the other parties to the deal.

“From this moment, the nuclear deal is between Iran and five countries,” Rouhani said. “We must wait to see what the five great countries will do.”

He said there would only be a “short period” in which to assess if Iran’s interests could still be preserved in concert with the remaining parties to the deal.

“If our interests are not assured, I will speak to the people and inform them of the decisions that have been taken,” Rouhani added.

Cover image: A handout picture provided by the Iranian presidency on May 8, 2018 shows President Hassan Rouhani giving a speech on Iranian TV in Tehran.