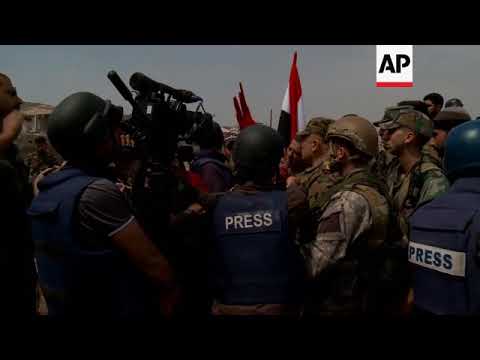 The Syrian regime and its Russian backers have managed to expel opposition guerrilla groups from the areas just north of the central cities of Homs and Hama. The groups agreed to hand over their heavy and medium weapons and to board buses for either Idlib province or Jarabulus in Aleppo province in the north. The latter areas are still in rebel hands and Jarabulus is under Turkish influence after Ankara’s invasion to remove Syrian Kurds from the territory bordering Turkey. Turkey has been bringing in Arab fundamentalists with whom the government of president Tayyip Erdogan feels comfortable.

Some 5,000 conservative Sunni fighters along with family members and civilians in the opposition have left these areas. Although not identified by name, most of these groups in central Syria, which is heavily Sunni Arab, originated in the Syrian Muslim Brotherhood.

The tactic of the regime and the Russians has been to threaten remaining enclaves of the opposition with massive, indiscriminate aerial and artillery bombardment unless the fighters agree to leave the area. In essence, the guerrillas are being blackmailed with the threat that their presence will cause enormous numbers of deaths in the areas where they are positioned–blackmailed, that is to say, with the threat that crimes against humanity will be perpetrated on their supporters and loved ones unless they decamp.

It is possible that the reports of regime use of gas at Douma (which I provisionally believe to be likely as we wait for the results of the OCPW investigation) helped the rebels decide not to risk trying to stick it out. The Saudi-backed Army of Islam in Douma, East Ghouta, had shown more stubbornness than the Brigades of the All-Merciful, the Freemen of Syria, and the Committee for Syrian Liberation (the al-Qaeda-linked former Nusra Front). That attempt to remain in control of Douma is likely what brought down on it the chlorine barrel bomb, or perhaps use of sarin gas, since the regime was damned if it was going to use up the limited number of experienced Panther Brigade special operations troops it had committed in East Ghouta, in hand to hand fighting with the fundamentalist guerrillas. As soon as reports and video emerged of the gas attack, the Army of Islam immediately surrendered and agreed to be evacuated.

Moreover, those group (unidentified in the Arabic press) north of Homs and Hama respectively have little hope they can survive. Money from the Gulf and the US CIA has dried up, as it has seemed increasingly certain that Russia and the regime will prevail. Trump canceled a CIA program to support 40 “vetted” groups (i.e. fighters certified not to have links to al-Qaeda.) We know nevertheless that some CIA aid made its way to the extremists and that some groups supported by the CIA established battlefield alliances of convenience with al-Qaeda-linked groups. I don’t think it can be ruled out that, as in Afghanistan in the 1980s, the US intel agencies actively cooperated with or asked allies to support the extremists, who were the best fighters against the al-Assad regime. In any case, US support for the rebels, some of them fundamentalists and others more centrist or Muslim-Brotherhood-oriented, has dried up under Trump. The main US involvement in Syria is an alliance of special operations forces with leftist Kurds in the northeast, against ISIL/ Daesh.

Well-known oppositionists afraid they will be targeted by the Baath Party secret police if they come back under regime control have also been allowed to leave these areas.

The 105th Brigade of the Republican Guard of the Syrian Arab Army supported by the Russian Aerospace Forces also have just taken the southern area of Hajar al-Aswad near to the Yarmouk former Palestinian refugee camp near Damascus from ISIL/ Daesh. They pushed ISIL fighters north toward the Hajar al-Aswad cemetery in what seems like a slow death knell for the terrorist group anywhere near the capital.

As the regime gradually reestablishes control of most of the urban, populated areas of central and western Syria, we have to begin asking whether this war is the most successful counter-insurgency operation in a large country since the British defeated communism in Malaya in the 1950s. The US military, and especially the wing led by David Petraeus, had hoped to develop new counter-insurgency theories and techniques that would ensure US victory in Iraq and Afghanistan. Both remain fragile, though Daesh is largely defeated in Iraq. But the Syrian uprising was multifaceted and the regime is making steady progress toward reincorporating the most populous districts of the country.