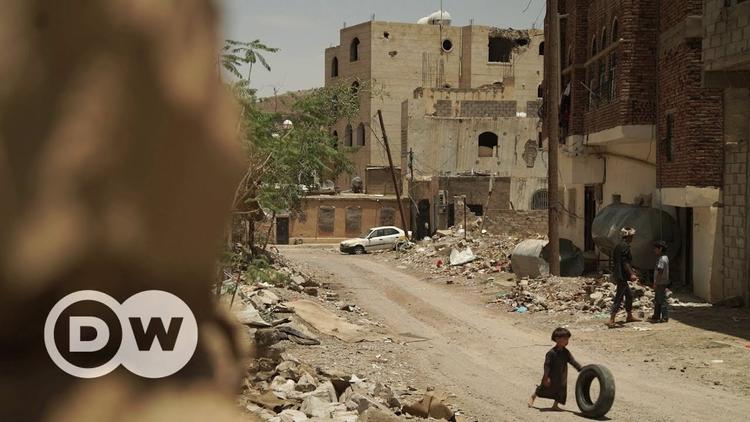 Richmond, Va. (Informed Comment) – Alongside their throttlehold over which reporters can visit what parts of Yemen, and thus what story they can tell, Saudi and Emirati investments in public relations, lobbying, think-tanks, and political consultants are shaping the narrative about their war there. Headline writers, pundits, Wikipedia, news correspondents, and even some so-called experts frame the asymmetric conflict as a “proxy war.” Sunnis nations led by Saudi Arabia are battling Shi`a Iran and its regional proxies, the story goes; the world’s worst man-made humanitarian disaster thus appears as un-named collateral damage.

The word “proxy,” incongruously accompanied by the label of a “civil war” between an “internationally recognized government” and “Iranian-backed militia,” rationalizes the unwarranted, unprovoked Saudi-UAE intervention in Yemen. Some headlines and stories reflect sloppy journalism and the tendency to mindlessly reiterate hackneyed tag-lines. However, make no mistake: big petrodollar spending around DuPont Circle systematically produces a story-line that exonerates the murder and starvation of Yemenis who are not even “Shi`a” in the name of countering overblown Iranian influence.

A proxy war is a clash between contending powers that do not engage directly in combat. Rather, rivals arm, train, and goad third parties in smaller countries to fight one another. The classic Cold War cases were civil or cross-border wars in Central America and southern Africa where communist or socialist forces battled US clients. In the big antagonism between patrons – the Soviet Union and the United States – the battlefield was in the so-called Third World. Some sources (like Wikipedia) characterize the Korean and Vietnam wars as “proxy” conflicts, because the American objective was to defeat communist “proxies;” but these conflicts, named for the places US forces engaged, are more commonly, and accurately, recalled as direct American interventions, or instances of American imperialism. Like scores of US interventions during the era of bipolar competition, they reflected a hegemonic urge to insulate friendly allies from popular revolutions, and to perpetuate dependent regimes.

The US- and UK- supported Saudi and UAE dynasties and their hired analysts insist that their Yemeni adversary is a proxy of the Iranian Revolutionary Guard. The inference is that Arab Gulf monarchies righteously resist Iranian – or Shi`a — influence in the Peninsula. Therefore, forty months of relentless bombing and blockade are justified as self-defense.

Poppycock. Sure, the Houthi militia have ex post facto Iranian support – not in their several pre-2011 rebellions against the Salih government, but more recently. When they swept into Sana`a in 2014, with the turncoat support of Salih and his regiments, they instigated regular flights to and from Tehran. This infuriated the Saudi and Emirati governments, who ordered the bombing of Sana`a’s runways and the indefinite shutdown of the airport. Improbably and irrationally, given the domestic roots of their grievances, the Houthis adopted Iranian slogans “death to America, death to Israel.” PressTV and other Iranian propaganda outlets champion the Houthi cause.

Civilian transport and propaganda do not, however, proxies make. The evidence of Houthis receiving Iranian arms despite the strangling Saudi-led, US-backed air and naval blockade is thin; the missiles they fire are low-tech and antiquated, mostly leftovers from the Soviet era. Iranians have not been filmed inside of Yemen. If anything, cries of “Iranian-backed” grossly inflate Tehran’s influence, and even that is more self-fulfilling after-the-fact prophesy than casus belli. No reasonable claim can be advanced that the Houthis take their marching orders or even their inspiration from the Islamic Republic. Two rather aside points in this regard: first, until recently the Persian Twelvers did not even consider the Zaydi Fivers as Shi`a; and secondly, the ‘cold war’ between Tehran and Riyadh is as much about republican vs. royal visions of an Islamic state as it is a denominational confrontation between the two great branches of Islam.

Moreover, the “internationally recognized government” has been in comfortable exile in Riyadh since March or April of 2015. “Internationally recognized” is another way of saying that the so-called government of Abdarrubuh Mansur Hadi – often portrayed as a puppet — has no domestic mandate or following, only Gulf sponsors. These patrons, particularly Saudi Arabia, have a history of meddling in Yemen against popular movements and democratic impulses. Among other instances, the House of Saud backed the Zaydi Imamate against republican officers in North Yemen during the 1962-1970 civil war: then, and perhaps now, the fear of republicanism over-rode any antipathy towards Zaydi Shi`ism. The Gulf patriarchies worried about uprisings in North Africa; the mass protests in Yemen in 2011 – led, incidentally, by women – caused genuine panic in the palaces.

The most dangerous aspect of the “proxy war against Iranian-backed militia” narrative is that it deflects attention away from indisputable war crimes. The Saudi-led coalition is now making a push on the strategic Red Sea port of al-Hudaydah, which has already been out of commission for three years and remains “occupied” by Houthi rebels. Al-Hudaydah port and the governorate of al-Hudaydah lie along the Red Sea coastal plain known as the Tihama. The people of the Tihama, residents of fishing, herding, pottery-and-basket-making, and sharecropping communities who have already suffered disproportionately from Saudi-led bombing and the naval blockade, are dark-skinned Yemenis of mixed Arab and African ancestry. Spiritually, they identify with the Shafi`i denomination of Sunni Islam. Socially, they are the poorest of the poor. Politically, they have no sympathy for the Houthis, much less Iran.

The victims of the coming – or current — onslaught are not “proxies of the Iranian Revolutionary Guard.” They are starving children under attack by filthy-rich monarchies wielding the most advanced weapons Britain and the United States have to sell.

Sheila Carapico is a professor of political science at the University of Richmond. She edited Arabia Incognita: Dispatches from Yemen and the Gulf (2016) and has written books and articles on Yemen and on gender, human rights, political economy, and international development assistance.