Ann Arbor (Informed Comment) – It is no surprise that flacks for the plutocrats in charge of the US like Nikki Haley are squawking about the report on American poverty just issued by UN Special Rapporteur Philip Alston. It throws loads of light on how unequal a society America is, how it is marching rapidly toward even greater, Third World levels of inequality, and how peculiar the US is, as a land of rapacious robber barons and 40 million completely marginalized poor.

The hardest thing for journalism to get right is big structural changes. I was a working journalist in my youth, and when I was blogging events like the Iraq War and the Arab Spring, I was often using journalistic techniques. Your time scale is the past few hours, your focus on the big political players. Personality matters. Details matter. You are zeroed in on trees. Only on a sabbatical (rare enough) do most journalists get a chance to step back and consider the forest. Academics, in contrast, are so consumed by really big forests that they often forget that there are any trees. Hitting the balance is the essence of good social reportage.

Big social statistics are hard to envision. That in a country like the US, with some 320 million people and an $18 trillion annual gross domestic product, the social statistics could be rapidly changing is also hard to fathom.

They are changing, the UN says, decidedly for the worse for tens of millions of people.

*The GOP tax massacre of earlier this year will transfer over time trillions of new dollars to the already obscenely wealthy, and result in diminished government services and a much smaller safety net for the rest of us. It was a tax cut, almost all of the benefits of which, went to one-tenth of one percent of the population. It will make them even richer, adding billions to their billions, and make the rest of us poorer. This is a structural change in US society with massive implications.

Already, the top 0.1% holds as much of the country’s wealth as the bottom 90% (i.e. almost everyone reading these words). 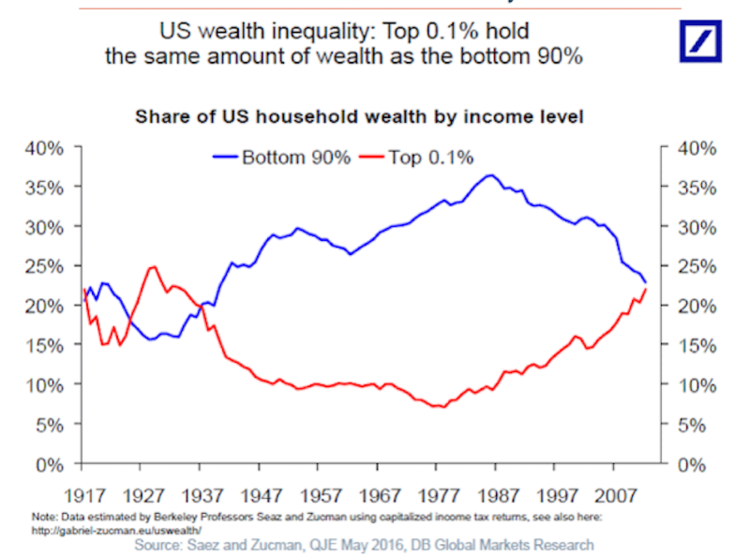 *US infant mortality rates in 2013 were the highest in the developed world.

*Americans can expect to live shorter and sicker lives, compared to people living in any other rich democracy, and the “health gap” between the U.S. and its peer countries continues to grow.

*U.S. inequality levels are far higher than those in most European countries

*Neglected tropical diseases, including Zika, are increasingly common in the USA. It has been estimated that 12 million Americans live with a neglected parasitic infection. A 2017 report documents the prevalence of hookworm in Lowndes County, Alabama.

*The US has the highest prevalence of obesity in the developed world.

*America has the highest incarceration rate in the world, ahead of Turkmenistan, El Salvador, Cuba, Thailand and the Russian Federation. Its rate is nearly 5 times the OECD average.

*The youth poverty rate in the United States is the highest across the OECD with one-quarter of youth living in poverty compared to less than 14% across the OECD.

The UN report violates the basic tenet of the propaganda of our robber barons, which is that things are getting better. They are getting worse, and dramatically so.

One reason Nikki Haley, current US ambassador to a UN she doesn’t believe in, and the former governor of South Carolina, is in such high dudgeon about the UN report is that she exemplifies everything wrong with America. She ran a state with one of the lowest life expectancies in the US and one of the highest infant mortality rates.

And the reason South Carolina elites cannot believe these statistics and are so embarrassed by them is that they are deeply about race and class. African-American health statistics in South Carolina are in third-world territory because the state is run as a caste system. Haley, as an Indian-American, managed to make the leap into whiteness by rendering her Sikhism ambiguous and often talking like an Evangelical, and by marrying into the dominant caste.

The Trump tax massacre was intended to take even more from African-Americans and Latinos and other minorities and transfer it to the largely English, Scottish, German and other Northern European business elite (the wealth of some of whom began accumulating in the nineteenth century through slavery or criminal activities).

I wrote about all this just a few years ago:

1 in every 15 African American men are incarcerated in comparison to 1 in every 106 white men.

“If current trends continue, one of every three black American males born today can expect to go to prison in his lifetime, as can one of every six Latino males—compared to one of every seventeen white males.”

So if the UN report were taken seriously, the US would require a social revolution to even approach the normality of a France or Germany, where a handful of billionaires don’t take food out of the mouth of hungry babies.

And that is why the shock troops of Trumpism are so eager to discredit it.