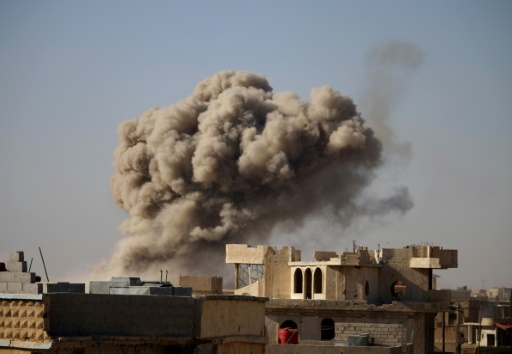 With Tony Gamal-Gabriel in Beirut

Daraa (Syria) (AFP) – Syria’s army launched an assault on the flashpoint southern city of Daraa Tuesday, state media said, after a week of deadly bombardment on the nearby countryside caused mass displacement.

Government forces have set their sights on retaking the south of the country, a strategic area that borders Jordan and the Israeli-occupied Golan Heights.

The escalation against rebels in the past week is the latest in a Russian-backed campaign to retake territory lost since the start of the Syria’s war in 2011.

For a week, they have ramped up their bombardment of countryside areas in the southern province of Daraa, which the United Nations says has forced 45,000 people to flee.

But on Tuesday, state media said the army was launching an “operation” on the provincial capital itself, known widely as the cradle of Syria’s seven-year uprising. 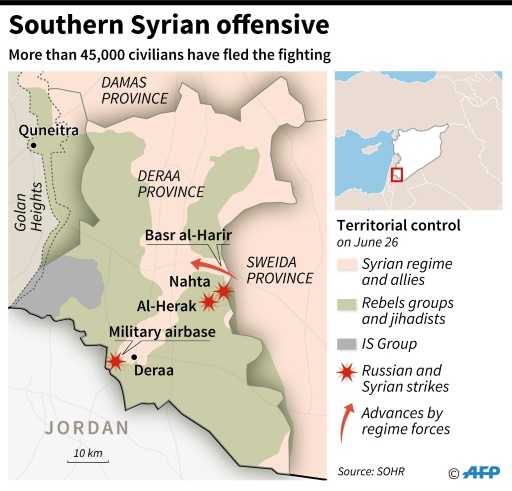 The Syrian Observatory for Human Rights, a Britain-based war monitor, said it was the first ground operation inside the city since the escalation began.

An AFP correspondent on the southern edge of Daraa city said he could see large columns of smoke along the city’s skyline and two airplanes circling above amid the steady boom of air strikes and shelling.

Government news agency SANA said the strikes were a prelude “before military units advance into the southeastern quarter of the city.”

Rebel groups mainly hold the southern half of the city while loyalists control the north.

Syria’s army is pursuing a divide-and-conquer strategy against rebels in the south, aiming to chop up the horseshoe-shaped territory that the opposition holds.

“The regime is seeking to take control of a military base south of the city, which will allow it to cut the route between Daraa city and the Jordanian border, as well as further divide the rebel areas,” said Abdel Rahman.

Overnight, regime forces had recaptured two villages in the east of Daraa province, which allowed them to cut off a rebel pocket, the Observatory said.

A military source cited by state media said the army had seized both Basr al-Harir and Mlehat al-Atash. 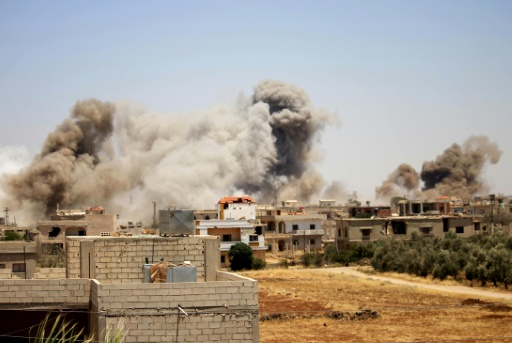 AFP / Mohamad ABAZEED. The Syrian government’s capture of the strategic rebel-held village of Basr al-Harir, seen here following an air strike on June 24, 2018, is part of a wider offensive in the south that has seen mounting rebel losses and a major exodus of civilians.

Troops then arrived on the edges of the nearby town of Al-Herak, SANA said.

Air strikes and barrel bombs on Tuesday caused “unparallelled destruction across the town and to its infrastructure”, 48-year-old resident Khaleel al-Hariri told AFP.

Al-Herak’s hospital had already been put out of service several days ago by bombardment.

Raids on Tuesday also killed a rescue worker in the town of Basr al-Harir, the White Helmets rescue service said.

The UN humanitarian coordination office (OCHA) in Syria said at least 45,000 people had fled fighting in the area in recent days.

Displaced families on Tuesday could be seen streaming out of rebel-held areas in trucks piled high with mattresses, furniture, and blankets.

Rebels hold most of Daraa and the adjacent province of Quneitra, while the government holds a majority of Sweida to the east.

The army began escalating last week with intense bombardment of Daraa’s eastern countryside, then started striking the rebel half of Daraa city as well.

On Tuesday, regime forces expanded the offensive even further.

That brings to 38 the number of civilians killed in a week of regime bombardment. A total of 29 rebels and 24 pro-government fighters have been killed so far. 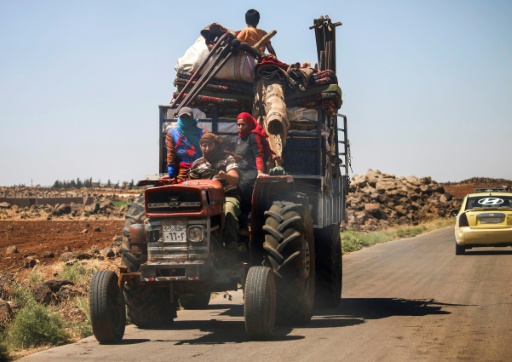 AFP/File / Mohamad ABAZEED. A Syrian family flees fighting in the southern province of Daraa on June 21, 2018, among at least 45,000 the United Nations says have been driven from their homes in the region.

The United Nations had previously warned that fighting was putting 750,000 people in rebel-held areas of the south in harm’s way.

More than five million people have fled abroad since the Syrian conflict erupted in 2011. Another six million are displaced inside the country.

Jordan said on Sunday it could not absorb a new wave of refugees across its border.

Front lines had been relatively quiet for nearly a year under a “de-escalation” deal agreed by Russia, the United States and Jordan in July 2017.

To avoid a bloody onslaught, Russia is leading talks with Syria, Jordan, Israel and the United States to reach a negotiated settlement.