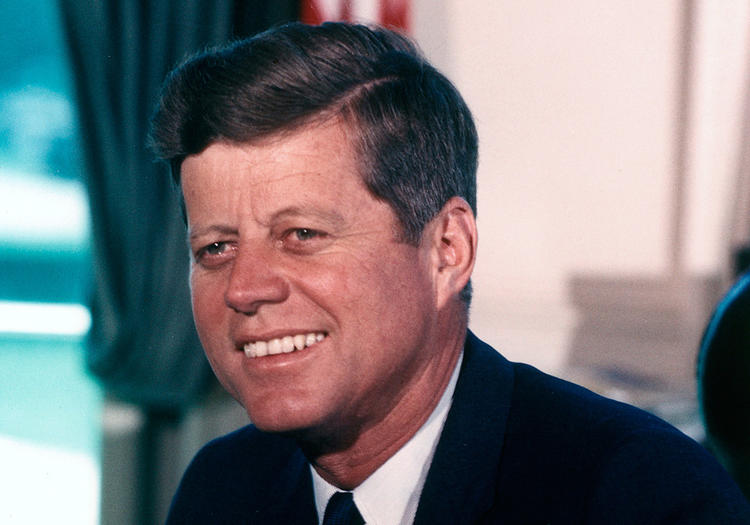 Greenfield, MA (Informed Comment) – Fifty-five years ago on June 10, President John F. Kennedy delivered a commencement address at American University that, in fewer than 30 minutes, turned traditional national security policy on its head. Kennedy proclaimed that world peace is “the most important topic on earth….not merely peace for Americans but peace for all men and women – not merely peace in our time but peace for all time.”

His speech was hailed by then Soviet Union premier Nikita Khrushchev as “the greatest speech by any American President since Roosevelt.”

Eight months earlier, both men had faced the terrifying possibility of nuclear holocaust in a showdown between the United States and the Soviet Union, remembered to history as the Cuban Missile Crisis. Shaken but emboldened by it, Kennedy laid out a principled, strategic and humanistic vision for ending the arms race and dissipating the hostile Cold War rhetoric and culture. He led by example in honoring the Russian people “for their many achievements –in science and space, in economic and industrial growth, in culture and in acts of courage” (alluding to 20 million Russians killed in World War II). And he announced a proposed direct line of communication between Moscow and Washington.

Within two months of his commencement address, both former Cold War antagonists and Britain signed the Partial Nuclear Test Ban Treaty, prohibiting nuclear testing in the atmosphere, outer space and under water, resulting in substantial reduction of radioactive contamination. President Kennedy was assassinated before being able to construct a path toward complete and permanent disarmament.

Let us contrast Kennedy’s words and convictions expressed on June 10, 1963 with our government’s present-day national defense posture. These two diverging roads – Kennedy’s, the one less traveled by – lay before us.

JFK
“What kind of peace do we seek…?” Not one “enforced on the world by American weapons of war…I am talking about…the kind of peace…that enables people…to hope and to build a better life for their children – not merely peace for Americans but peace for all men and women.”

Stockpiling weapons – nuclear and non-nuclear – “is not the only” nor the most efficient means of achieving peace, he continues. Both the United States and the Soviet Union “are devoting massive sums of money that could be better devoted to combatting ignorance, poverty, and disease…New weapons beget new counterweapons.”

The Pentagon
2018 opened with a new National Defense Posture: The greatest threat to U.S national security and prosperity is now Russia and China, with terrorism relegated to a second tier. Elsewhere the Pentagon speaks of 4+1 threats: Russia, China, North Korea, Iran and terrorism. Their chief concern is that the 2018-19 defense budget –morbidly obese by comparison with the funds dedicated to diplomacy – is not large enough for conducting war on all these fronts.

President Trump’s proposed national defense budget for next fiscal year, recently passed overwhelmingly by Republicans and Democrats in the House of Representatives, allocates 18 times more funding ($717 billion) to military defense than to his proposed budget for diplomacy ($39 billion).

China’s response to U.S. war talk? The United States has unparalleled military might, spending three times more on military than China, remarks Chinese foreign ministry spokesman Geng Shuang. Yet its sense of insecurity is “beyond comprehension.” He urged the United States to abandon its confrontation mindset and move with the trend of the times – multipolarity, that is, numerous power centers in the world. Bluntly put: get used to sharing power with other regions, alliances and countries.

JFK
“The pursuit of peace is not as dramatic as the pursuit of war…but we have no more urgent task…Too many of us think it is impossible…But that is a dangerous, defeatist belief…Our problems are man-made – therefore, they can be solved by [us].”

Resolving to end war for good is not a perfect guarantee, he continues, but it does offer “far more security and far fewer risks than an unabated, uncontrolled, unpredictable arms race.”

“… We can seek a relaxation of tensions without relaxing our guard…we are willing and able to engage in peaceful competition with any people on earth.” What will this require, he asks. “Increased understanding” with our enemies, which requires “increased contact and communication.” The goal is complete disarmament achieved in stages while building “new institutions of peace which would take the place of arms.”

The Pentagon
Since 9/11 we have expended more than $250 billion dollars on training soldiers and security officers from at least 150 countries in the name of combatting terrorism and promoting democracy, international peace and security. The results: no tangible national security benefit in Middle East and African countries; and no evidence of an increase in democratic values and civilian control of armed forces. If anything, the opposite: a doubling of military-backed coups in the home countries of militaries we have trained. The program, according to a former U.S. commanding officer for Africa, Carter Ham, succeeded in transmission of military skills, but failed to spend enough time on promoting good governance and democratic values.

Vietnam veteran and foreign policy historian Andrew Bacevich asserts that the goal of the United States since the fall of the Soviet Union and end of the Cold War has been to remake the world in its own image: to “align everybody from A to Z – Afghanistan to Zimbabwe with American values and the American way of life.” With this goal, the U.S. embroiled itself for decades now in “a series of costly, senseless, unsuccessful and ultimately counterproductive wars.” Millions have been killed; countries, broken; trillions in U.S. war debt, accumulated; and terrorism abroad and at home, fueled.

JFK
If we cannot end now our differences, at least we can focus on our “common interests” and work to “make the world safe for diversity” of ideas, beliefs, forms of economy and government. “For in the final analysis, we all inhabit this small planet. We all breathe the same air. We all cherish our children’s future. And we are all mortal.”

How far we have diverged as a country from this principled, strategic and humanistic vision for our national security toward one of moral collapse. The road taken by Trump and his administration – clutching to military superpower status, abandoning the multiparty nuclear agreement with Iran and the Paris climate agreement, threatening to use nuclear weapons, and eroding decades of environmental protection – leads only to hate, hostility and extreme peril.

Co-author Frances Crowe is a much-honored lifelong activist for peace and justice who lives in western Massachusetts.