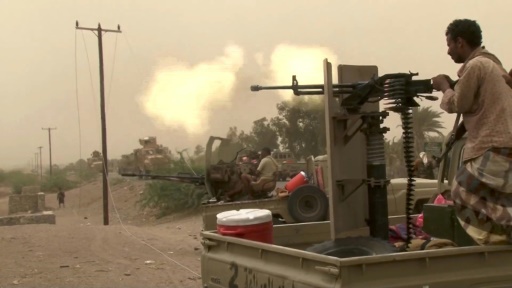 Khokha (Yemen) (AFP) – Yemen’s Huthi rebels vowed to fight on after pro-government forces seized Hodeida airport from them on Wednesday, in a major step towards retaking the port city following a week-long battle.

“We will face all of the incursions on the ground. Our determination will never be dented,” he said via the rebels’ Al-Masirah news outlet.

Pro-government forces announced the capture of Hodeida airport on Wednesday morning, a day after breaking through the perimeter fence.

The airport was disused but it housed a major rebel base just inland from the coastal road into the city from the south.

Fresh clashes later erupted between UAE-backed government forces and the Iran-allied rebels on a road linking the airport to Hodeida port on the Red Sea coast, a Yemeni army source said.

Yemeni President Abedrabbo Mansour Hadi said military “operations will continue on various fronts until (the capital) Sanaa and the whole territory” are retaken from the rebels.

On June 13, Yemen’s army and its allies launched their offensive to clear Hodeida of rebel fighters who have held it since 2014, raising UN concerns for vital aid shipments and food imports through the city’s docks.

At least 156 Huthis and 28 soldiers were killed in the fight for the airport, according to Hodeida hospital sources.

That raised the death toll in the battle for the city to 348. No civilian casualties have yet been confirmed. 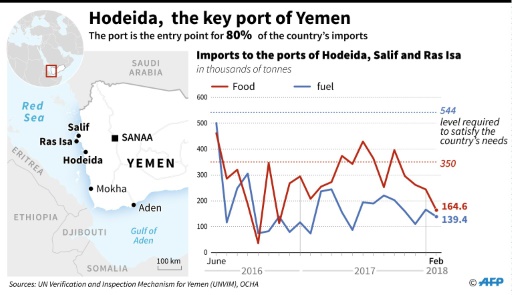 The United Arab Emirates and other members of a Saudi-led coalition that intervened in support of the government in 2015 have accused regional arch foe Iran of using Hodeida as the major conduit for arms smuggling to the rebels. Tehran has denied the allegation.

UAE Foreign Minister Anwar Gargash said the “liberation of Hodeida is the beginning to ending the war.

“The choice in Yemen is between the state and militia, between order and violence, between peace and war,” he wrote on Twitter, referring to Huthi militiamen.

Three-quarters of Yemen’s imports pass through the port, providing a lifeline for some 22 million people dependent on aid.

UN envoy Martin Griffiths held four days of talks in rebel-held Sanaa in a bid to avert an all-out battle for Hodeida but flew out on Tuesday without announcing any breakthrough.

The United Nations has described Yemen as the world’s gravest humanitarian crisis and warned any attack on Hodeida port could cripple aid shipments.

“As of 19 June, the water supply has been disrupted in several areas and people are reportedly relying on water from mosque wells,” it said in a statement.

“Access to adequate and safe water is now a major concern, particularly in light of the ongoing cholera emergency.”

Hodeida’s residents are bracing for what they fear will be devastating street fighting, as tanks and buses carrying uniformed troops roll through the empty streets of the once-bustling city. 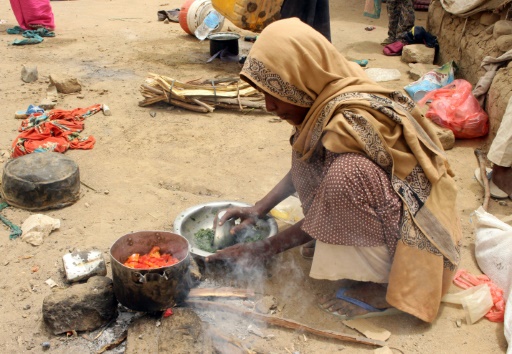 AFP / ESSA AHMED. The UN says fierce fighting in the Hodeida area of Yemen has already driven 5,200 families from their homes as pro-government forces advanced up the Red Sea coast.

Some 5,200 families fled their homes this month as pro-government forces advanced up the Red Sea coast, according to the UN.

The Hodeida offensive, dubbed Operation Golden Victory, is the most intense battlefront in the already-brutal Yemen war which has left millions displaced.

The 2015 Saudi-led intervention came after Hadi fled into exile as the rebels overran much of the country.

The conflict has since killed nearly 10,000 people, most of them civilians, while more than 2,200 others have died from cholera.

The coalition has helped pro-government forces regain control of the south and much of the Red Sea coast, but the rebels still control Sanaa and most of the north.

Multiple rounds of UN-brokered peace talks have all failed to achieve any breakthrough.

The Yemeni government and its allies have insisted that the Huthis must fully withdraw from Hodeida and turn over the port to UN supervision.

The rebels have so far agreed only to share control of the port with the United Nations.