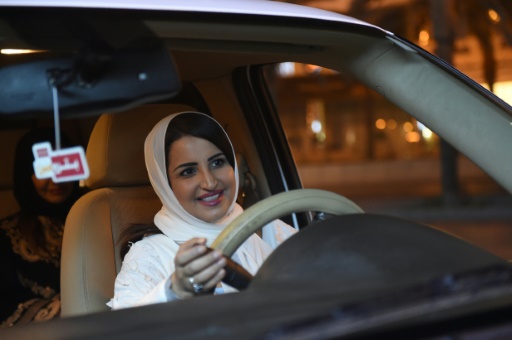 Riyadh (AFP) – Every few metres someone — a newlywed couple, a group of young girls with balloons — stops Samar Almogren to cheer her on or flash her a thumbs-up.

It’s midnight in Riyadh, and she’s making her way across the city she was born and raised in, finally in the driver’s seat of her own car.

Saudi Arabia’s notorious ban on women driving ended on Sunday. After drinking tea and counting down the minutes, at midnight, Samar — a TV anchor and mother-of-three — went upstairs to kiss her four-year-old son Salloum goodnight.

She then put on a flowing white abaya, strode out of her front door, accompanied by her best friend, and walked towards a white GMC parked outside her house in the Narjiss neighbourhood in northern Riyadh.

Across the street, her neighbour had just arrived home with two bags of groceries. He paused, placed his shopping on the hood of his car, and watched her closely.

In her cateye glasses, wedge sandals and nose ring, she did not skip a beat. She smiled, climbed in, started the ignition and pulled out of her parking spot. 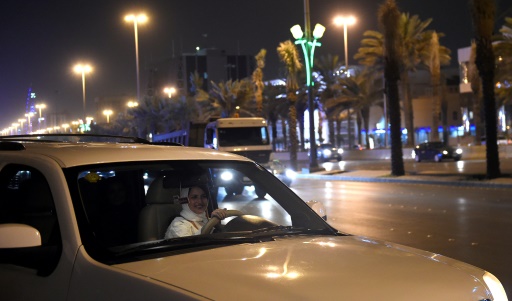 AFP / FAYEZ NURELDINE. It’s midnight in Riyadh, and Samar Almogren is making her way across the city she was born and raised in.

“I have goosebumps,” she says as she turns onto the King Fahd highway, the main road in the Saudi capital.

She drives in silence for a few minutes, glancing up at the moon, then adds: “I never in my life imagined I would be driving here. On this road. Driving.”

The question of whether Saudi Arabian society is “ready” for women to drive has been hotly debated in the kingdom.

In 2013, Sheikh Saleh al-Luhaidan, a notable Saudi cleric, announced driving could damage a woman’s ovaries and push the pelvis up, thus leading to birth defects.

Resistance to the end of the driving ban still resonates across some segments of society, with songs titled “You will not drive” and “No woman no drive” popping up on social media in recent weeks.

But as she drives across Riyadh, men and women stopped Samar’s SUV to congratulate her and voice their support. 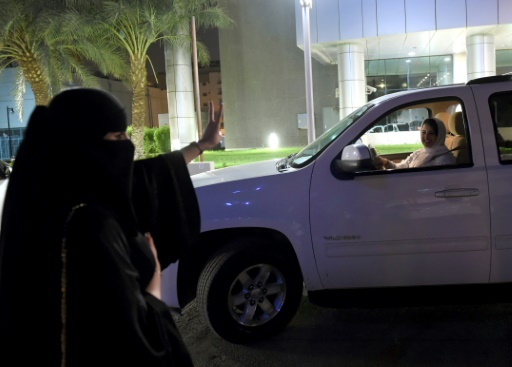 AFP / FAYEZ NURELDINE. Resistance to the end of the driving ban still resonates across some segments of society.

A group of men in their 20s, waiting for the police assessment of a minor accident, spot Samar driving by. They smile and cheer. The policeman, too, looks up and smiles.

A man in a suit, smoking on a sidewalk, applauds her loudly. A young couple walking hand-in-hand –- him in a t-shirt and jeans, her in head-to-toe black abaya and niqab — stop to flash her a thumbs-up and a victory sign.

“This is the society they say is not ready for women to drive,” Samar says, visibly moved.

Samar, whose youngest son was born with Down’s syndrome, has already decided where she will drive the next day.

“My first trip, tomorrow, is to take Salloumi to my mother’s house,” she says. “And then to take my mother wherever she wants.”

For many, the end of Saudi Arabia’s driving ban for women is a welcome step, but far from enough in a country that still has a guardianship system in 2018.

Under the system, women need the permission of their closest male relative — husband, father, brother or even son — for most facets of life, including travelling, enrolling in school and in certain cases receiving medical attention.

Samar says she is fully aware that her newfound freedom to drive was not the fruit of activists who have long fought Saudi Arabia’s repressive gender policies — some of whom were arrested just this month.

Decades of campaigning by activists failed to achieve what one stroke of the king’s pen ended in a royal decree signed last year.

“This was a political decision,” she says. 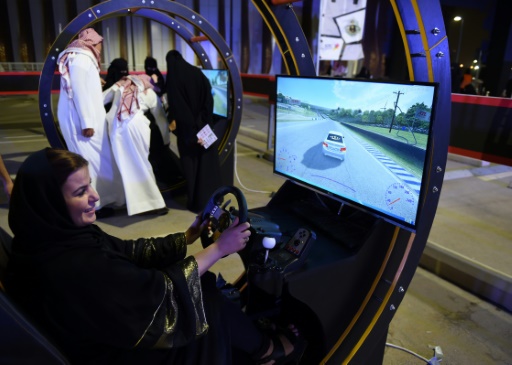 AFP / FAYEZ NURELDINE. Women’s will to drive in Saudi Arabia –- like the will to dismantle the guardianship system -– goes back nearly two decades.

But the will for women to drive in Saudi Arabia –- like the will to dismantle the guardianship system -– goes back nearly two decades.

On November 6, 1990, 47 women drove themselves through the streets of Riyadh in an act of protest against, and in defiance of, the ban, stopping only when they were arrested.

Some lost their jobs. Others lost the support of their families. What was not lost was their cause.

One of the women, Faiza al-Bakr, now works with Samar at the national paper where she runs a twice-weekly column.