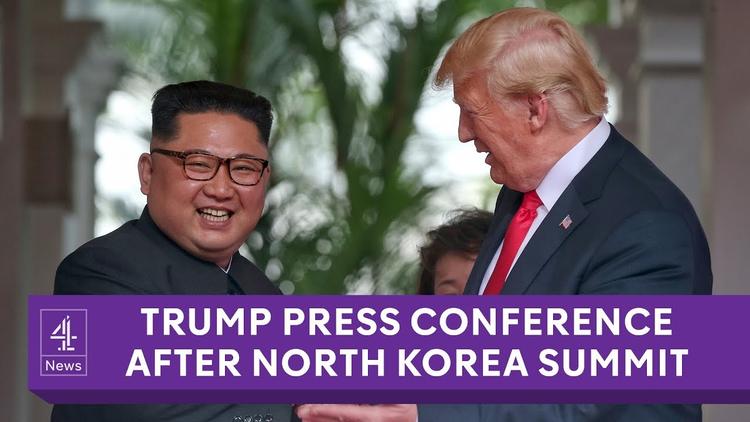 It was 1991 in Seoul, and I was on assignment for the Christian Science Monitor newspaper covering the widespread protests against the authoritarian South Korean government. Demonstrators protested increasing poverty and the continued U.S. troop presence in their country. Many Koreans saw those troops as an occupying force.

Twenty-seven years later those issues have not gone away. During the June 12 U.S.-North Koran summit, President Donald Trump even called for the withdrawal of the 30,000 U.S. troops at some undetermined time.

“I want to bring our soldiers back home,” he said. “But that’s not part of the equation right now. I hope it will be eventually.”

Far from being a defensive force, the U.S. troops project U.S. power in the region aimed at challenging China and making sure pro-U.S. regional governments stay in power, according to Christine Ahn, co-founder of the Korea Policy Institute.

“The bases insure U.S. political, military and economic interests,” she told me. “There’s always the threat of a U.S. military incursion to advance corporate interests.”

The withdrawal of troops is just one of many contentious issues that must be resolved in negotiations between the United States and the Democratic People’s Republic of Korea (DPRK). The summit didn’t resolve that or any other issues, although the two sides took a small step forward by simply holding the meeting.

But neither side defined what those commitments mean. And the Democratic and Republican hawks in Washington are already trying to make sure there’s no meaningful peace accord. After all, that’s what happened with every previous peace effort.

Over the past 30 years, the United States and DPRK have held numerous talks and agreed to denuclearization several times. But all ultimately failed because Washington hasn’t been interested in guaranteeing DPRK’s security. The North Koreans want to keep some nuclear weapons as a deterrent against a U.S. attack or attempt at regime change. Unfortunately, a very strong faction in Washington doesn’t support any peace agreement and instead seeks to overthrow the DPRK government.

In the 1990s North Korea had not yet developed nuclear weapons. In 1994 President Bill Clinton negotiated the “Agreed Framework” that guaranteed the DPRK would not build nuclear weapons and, in return, the United States would help North Korea develop nuclear generated electric power.

The DPRK agreed to stay within the Non Proliferation Treaty, which prohibits development of nuclear weapons. North Korea shut its Yongbyon reactor as verified by international inspectors. The United States agreed to facilitate building two light water nuclear reactors, which could generate nuclear fuel for power generation but not weapons. The United States agreed to lift economic sanctions and provide heavy fuel oil to operate the DPRK’s electric power grid.

But Republican and Democratic hawks in the U.S. Congress thought the president made too many concessions and wanted to sabotage the Agreed Framework. They refused to fund the fuel oil. The Clinton administration also slow walked lifting of sanctions.

When George W. Bush administration took office in 2001, hardliners such as Vice President Dick Cheney, Secretary of Defense Don Rumsfeld and Under Secretary of State John Bolton opposed the deal. By 2002, the Agreed Framework was dead.

That year Bush declared North Korea to be part of the “Axis of Evil,” which also included Iran and Saddam Hussein’s Iraq. After the U.S. invasion of Iraq in 2003, Korea feared it could be the next target for regime change. The DPRK withdrew from the Non Proliferation Treaty and began a sprint towards developing a nuclear weapon.

In the mid 2000s, negotiations resumed, dubbed the Six Party Talks. Participants included both Koreas, the United States, China, Japan and Russia. In September 2005 the parties agreed that DPRK would “abandon all nuclear weapons and existing nuclear programs.”

But the following month, the Bush administration accused Banco Delta in Macau of money laundering, which froze $25 million in DPRK funds. U.S. hardliners saw this as a pressure tactic; North Korea saw it as another example of U.S. bullying.

“The U.S. policy led to North Korea withdrawal from the talks,” said analyst Ahn. The DPRK held its first atomic test in 2006.

The DPRK is not going to accept such demands and the Democratic leadership position guarantees no agreement will be reached, noted Jonathan Granoff, president of the Global Security Institute.

“I am very concerned partisanship undermines our national security,” he told me. “It’s a toxic approach. They should favor diminished tensions and bringing North Korea into the family of nations.”

Today the DPRK has an estimated 15-60 nuclear bombs. It has short and long range ballistic missiles capable of hitting Asia and the continental United States. It’s not clear if North Korea has been able to fit nuclear warheads on the missiles.

In my view, the United States should guarantee the DPRK’s security by signing a peace treaty ending the Korean War, establishing normal diplomatic relations and accepting a limited number of North Korean nukes with guarantees that no more will be produced. We should get busy pulling all U.S. troops out of Seoul.

Official Washington would ask how can we trust a brutal dictatorship that oppresses its own people and failed to live up to past commitments?

“The government of North Korea is tyrannical,” said Global Security Institute’s Granoff. “But should we be in a state of war with all tyrants?”

Signing agreements with the DPRK “won’t make them a progressive state.” But it will help set the conditions for progress. Political change and eventual reunification of North and South Korea can’t be imposed from the outside, he said. “The process must be led by the Korean people themselves.”