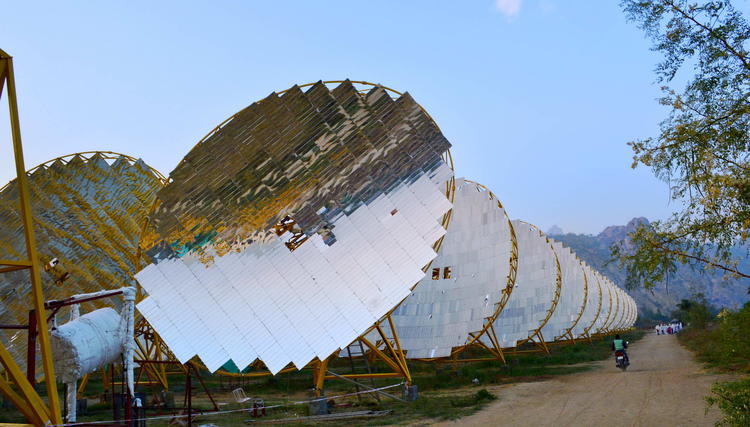 Once upon a time, if it was big and it was a technological advance, I’d expect to hear it was happening in the United States. As Trump flushes the toilet on true American greatness (its intellectual capital, ability to attract talent from around the world, its open-mindedness and freedom for innovation, its commitment to the environment) and watches it swirl away into the sewer of hate and backwardness, other world powers are chomping at the bit to rise. India is one of them.

The Hindu holy book, the Bhagavad-Gita, described God this way “If the light of a thousand suns were to burst forth at once in the sky, that would be like the splendor of that mighty one.”

India is in the process of letting the light reflected in PV panels like thousand suns light up its society, in the process helping save the earth from deadly carbon dioxide emissions.

Mercom India reports that five of the world’s largest solar power installations are now being constructed in India, according to the US-based Institute for Energy Economics and Financial Analysis (IEEFA). The five, among the 14 largest such solar farms being implemented now around the world, include These are: Bhadla Industrial Solar Park (2,225 MW), Pavagada Solar Park (2 GW), Ananthapuramu – I Solar Park (1.5 GW), Kadapa Ultra Mega Solar Park (1 GW), and Rewa Solar Park (750 MW).

And there is more–a sixth and biggest of all in the pipeline. India has approved the building of a new 5000 megawatt solar farm in the northwestern state of Gujarat, which on completion will be the largest in India, more than twice as big as the massive 2,255 MW Bhadla solar park now being built in Rajasthan. Gujarat state has 300 sunny days a year and also has strong wind potential.

India is not forging ahead on the solar front as fast as China. But in 2017 for the first time more solar capacity was installed than new coal. India intends to have 275 gigawatts of renewable capacity by 2027 and is counting on solar to provide two-thirds of it. This configuration differs from Germany and the US, where wind far outstrips solar progress so far.

But India is innovating by auctioning 2.5 gigawatts of wind-solar hybrid power, combining the two. The advantages of wind-solar are that the installation cost is 15% less than pure solar or pure wind, and they are significantly more efficient together (wind often picks up at night or in cloudier seasons, replacing lost pv generation).

Coal and gas for electricity generation now make up two-thirds of India’s capacity, but in ten years it will fall to only 43%, according to Mercom and the study.

Solar at the moment makes up nearly 7 percent of India’s electricity generation capacity, or 22 gigawatts. But the solar contribution nearly doubled in just a year, from March 2017 to March 2018, from 3.76 percent. At this rate, the IEEFA predictions seem very conservative and could easily be rapidly outstripped.

Solar energy only accounts for about 1.3% of American electricity generation.