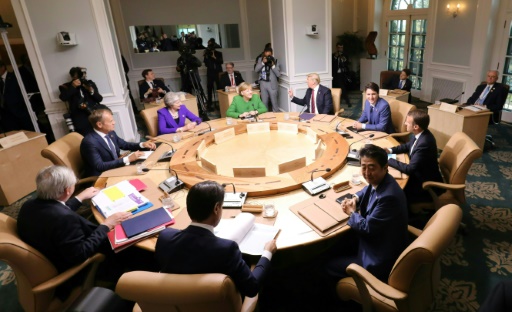 Quebec City (AFP) – For decades, multilateral institutions such as the United Nations, World Trade Organization and Group of Seven were widely accepted by Western governments as the best way to shore up world order.

Now, with Donald Trump in the White House and his “America First” foreign policy echoed in rise of nationalist and populist movements in Europe, the cracks in the concrete are growing ever wider.

Whether circumventing the WTO by imposing tariffs on its signatories, withholding funds from the UN or going it alone at an ongoing G7 summit in Canada, Trump has shown his disdain for organizations where American leadership was once a given.

“What worries me most is the fact that the rules-based international order is being challenged, quite surprisingly not by the usual suspects but by its main architect and guarantor, the US,” European Council President Donald Tusk said in Quebec on Friday as the rest of the G7 awaited the arrival of Trump.

The US president’s skepticism and in some cases hostility towards international institutions was evident throughout his electoral campaign, even at one state declaring the NATO military alliance “obsolete.”

While his views of NATO have softened — at least in public — since he took power in January last year, he has accused the WTO of having been “a disaster for us” and “very unfair” in its policing of global trade.

Similar arguments were used to justify the US withdrawal from the Paris climate accord, a painstakingly negotiated agreement that had been signed by every country bar Syria and Nicaragua by the time Trump announced his decision a year ago.

Trump’s ambassador to the United Nations, Nikki Haley, has warned that the world body’s criticism of the US decision to recognize Jerusalem as Israel’s capital will lead to a reduction in its funding.

Around the same time that the United Nations was created in 1945 — an organization headquartered in New York and which relies on Washington for the lion’s share of its funding — other multinational organizations also began taking root.

The General Agreement on Tariffs and Trade (GATT), which began work in 1948, was the precursor to the modern-day WTO, which now has more than 160 members.

The International Monetary Fund and the World Bank both emerged from an agreement signed in 1944 at Bretton Woods in the northeastern US state of New Hampshire and soon became the main planks of the international finance system.

By tradition, the World Bank is led by an American while a European is at the helm of the IMF.

Multilateral institutions also began taking root on the other side of the Atlantic, including the Brussels-based NATO alliance which includes the United States and nearly all of Europe. Its birth came at a conference in Washington in 1949.

Its creation was followed soon after by the European Coal and Steel Community which initially included only six member nations but later morphed into the European Union, which is now a bulging club of 28 countries.

That number should be reduced to 27 within the next 12 months when Britain leaves and the resentments towards the EU which prompted the British public to vote for Brexit are widespread.

Italy’s new Prime Minister Giuseppe Conte, who made his international entrance at the G7 summit, was propelled into office after the Eurosceptic Five Star movement joined a right-wing coalition in Rome that has evoked comparisons with Trump’s rise.

French President Emmanuel Macron is among those who insist that multinational institutions are the best way to address grievances in the era of globalization as long as the bodies adapt and reform.

Ella Kokotsis of Toronto University’s Munk School of Global Affairs said that Ronald Reagan also clashed with his peers at the start of his tenure in the White House four decades ago but he soon made common ground with his fellow Western leaders at the height of the Cold War.

But the differences appear more profound this time round.

“They (the other G7 leaders in the 1980s) were able to integrate Ronald Reagan into the fold quite quickly and he bought into the views of the rest of his G7 counterparts,” she told AFP.

“Here we are seeing a different mood — it’s very unpredictable with Trump.”