Members of the Iraqi security forces stand guard as protesters in the capital Baghdad's Tahrir Square demonstrate against unemployment on July 14, 2018. - Two demonstrators were killed in southern Iraq, officials said, as protests against unemployment spread today from the port city of Basra to other parts of the country including Baghdad. (Photo by AHMAD AL-RUBAYE / AFP) (Photo credit should read AHMAD AL-RUBAYE/AFP/Getty Images)

Baghdad (Niqash.org) – A few days ago, a resident in the northern city of Mosul posted a comment about ongoing protests in southern Iraq on Facebook. “We greet you from Mosul,” wrote Imam al-Qaysi. “Our hearts are with you and we know what it’s like to live in these tragic conditions. We don’t have state services either. But we hope that God protects you and we wish you many blessings in life.”

Another Iraqi Facebook user, Mohammed al-Jibouri, wrote that his city was silent. “Our people are sad because they cannot go to the streets and demonstrate,” he said.

These seemed like a reasonable gestures of support for protestors in southern cities like Basra, who have been protesting for around two weeks now about the lack of water, power and state services, made all the more unbearable by stifling summer heat. However what did not seem reasonable were some of the extreme responses the messages got.

The Iraqi government has made this mistake – of not listening to the demonstrators – before.

“You, the people of Mosul, were in cahoots with the [extremist group known as ]the Islamic State,” one of the comments read. “So you should not be allowed to demonstrate.”

“The Baathists shouldn’t be allowed to protest,” said another, referring to the outlawed Baath political party run by former Iraqi leader, Saddam Hussein, a Sunni Muslim.

The demonstrations about poor state services started in Basra on July 14 but have since spread to nine other provinces, as well as the capital, Baghdad. But there have been no similar protests in Sunni Muslim-majority provinces – and that is despite the fact that the living conditions there are not necessarily better in central and northern Iraq, and in some cases, could even be worse. So why isn’t anybody protesting there?

“We share the concerns of our people in the south,” Abdul Rahman al-Fahdawi, one of the community leaders among Ramadi’s tribes in Anbar, told NIQASH. “Our living conditions are not much better than those in Basra or Dhi Qar and in some cases, they may even be worse. Our homes have been destroyed and there is no infrastructure because of the military operations against the terrorists. But we cannot participate in the demonstrations because we will be accused of being terrorists and Baathists who want to destroy the government.”

When people in Sunni Muslim areas started anti-government protests several years ago, they were peaceful, al-Fahdawi adds. “But the government never responded to our protests for over a year,” he says, which eventually made it possible for the rise of the extremist Islamic State, or IS, group, who base their ideology on a particularly extreme and perverted view of Sunni Islam. The IS group played upon the Sunni population’s dissatisfaction with the Iraqi government, then headed by prime minister Nouri al-Maliki, and the way the government cracked down on the protestors. 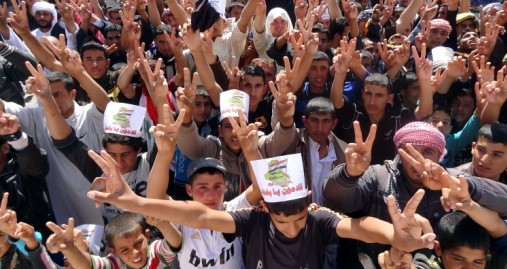 Sunni protestors in 2013. Via Niqash.org

After the Iraqi army was used to brutally disperse the protests, which had become ongoing sit-ins, the IS group offered itself as a protector of the country’s Sunnis against the threat posed by the Shiite-led government. Locals only discovered the level of extremism and brutality the IS group practiced later.

“The Iraqi government has made this mistake – of not listening to the demonstrators – before,” al-Fahdawi says. “This means that extremists, anarchists or even politicians could join the demonstrations which makes the protestors’ motivations look impure. So today we can only watch the protestors from a distance and wish them luck and safety. We hope the government will listen to their very legitimate demands.”

“Our living conditions are not that different from theirs,” says Iman al-Qaysi, the civil society activist from Mosul who wrote that initial comment about supporting the protests on Facebook. “We only get a few hours of water a day and the water isn’t clean because of the destruction of water purification plants. We only get about three hours of electricity a day and the city’s garbage is piling up on street corners because there are no municipal garbage workers,” he says. There are no jobs either, al-Qaysi adds, and the people here desperately need jobs because they need money to be able to rebuild their homes.

But he and his neighbours also know that if they dare to protest, they will be greeted with ready-made insults and threats: terrorists, Baath party supporters, extremists.

The people of Basra are good people and they deserve better.

“I was so disappointed with the replies to my comment,” al-Qaysi says. “People were saying things like, why should you protest? You should thank God the Iraqi army saved you instead. It is as if you want the IS group to return to your areas.”

The situation isn’t that different in other Sunni-Muslim-majority areas. In the province of Salahaddin, locals have been watching the demonstrations further south but they haven’t organized any protests of their own either, for the same reasons. They fear the consequences, says Hussam al-Jibouri, a resident of Tikrit.

People here still have bad memories of their own anti-government protests from 2013, al-Jibouri says, after which the IS group arrived. Any kind of chaos could bring the extremists back, they worry.

“Additionally civilian activists think that the security forces will just call them Baathists,” al-Jibouri explains. “Because Saddam Hussein was from Tikrit originally.”

Al-Jibouri says he and others here are sympathetic to the cause of protestors in places like Basra. “I visited the city a few months ago and saw for myself the situation there. The people of Basra are good people and they deserve better,” he says. “Basra produces so much oil for Iraq and feeds all of Iraq and we hope the locals there can enjoy better services and stability. Also,” al-Jibouri pauses, “I call upon the authorities in Salahaddin to think about this too. Just because we are not demonstrating does not mean we are happy with the conditions here.”