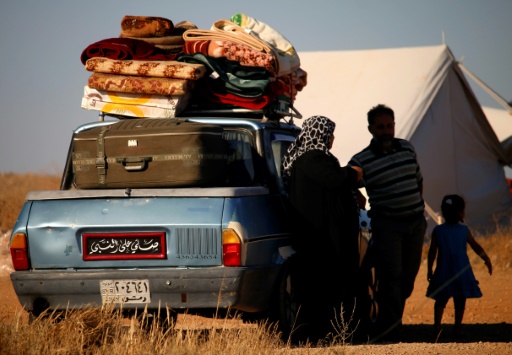 Daraa (Syria) (AFP) – More than a quarter of a million people have fled a Russian-backed government onslaught on southern Syria, the United Nations said Monday, in the latest civilian exodus in the seven-year war.

The strategic area was ostensibly protected by a ceasefire agreed by the US, Jordan, and Russia just under a year ago, but President Bashar al-Assad is dead-set on retaking it.

The violence has pushed waves of terrified civilians out of their homes at a shocking rate, the UN’s refugee agency (UNHCR) said Monday.

“We were expecting the number of displaced in southern Syria to reach 200,000, but it has already exceeded 270,000 people in record time,” said UNHCR spokesman in Amman Mohammad Hawari. 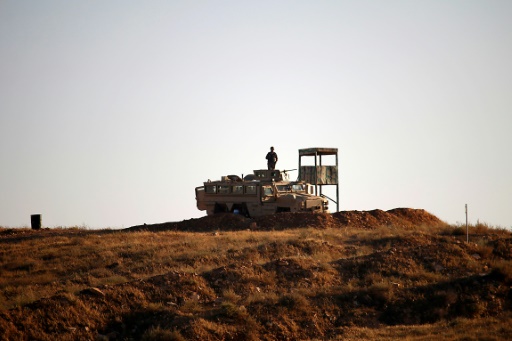 AFP / Mohamad ABAZEED. Jordanian soldiers control the border between Syria and Jordan, near the town of Nasib, southern Syria, on July 1, 2018.

According to the UN’s humanitarian coordination office, 70,000 of those displaced have sought shelter along the border with Jordan.

They arrived in dilapidated cars piled high with mattresses and suitcases to join thousands already camped out in arid plains near the frontier.

Jordan has kept its border firmly sealed, insisting it cannot handle any more than the 650,000 registered Syrian refugees it already houses, and has instead sent aid into its war-torn neighbour.

Thousands of other displaced have headed west towards the Israeli-occupied Golan Heights, although Israel, too, has pledged to keep its border closed.

Those key frontiers are what make Syria’s south a prized area for Assad, in addition to its accessibility to Damascus.

After securing the capital earlier this year, he turned to the south, bombing rebel towns heavily and making significant ground gains.

The government simultaneously also opened negotiations with rebel factions through its ally Russia, offering a halt to bombardment if rebels hand over territory.

More than a dozen towns and villages have agreed to a regime takeover in recent days, doubling the area under government control in the main province of Daraa to 60 percent since operations began on June 19.

But other opposition bodies have rejected the deals. 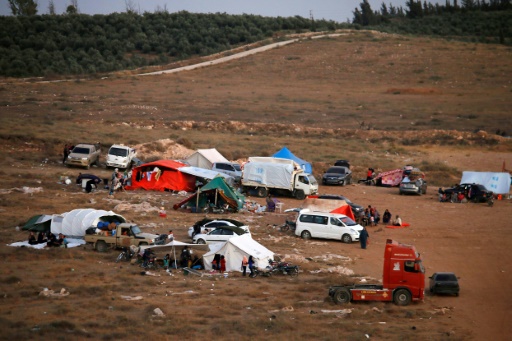 AFP / Mohamad ABAZEED. Displaced Syrians from the Daraa province fleeing shelling by pro-government forces wait in a makeshift camp to cross the Jordanian border, near the town of Nasib, southern Syria, on July 1, 2018.

In a statement Monday, the civilian half of the opposition’s delegation said they had withdrawn from talks.

“We did not attend negotiations today. We were not party to any agreement and we never will be,” said the statement, accusing those who agreed to such handovers of trying to selfishly secure personal interests.

The Britain-based Syrian Observatory for Human Rights said on Monday there were “divisions among rebel groups” over whether to agree to the terms proposed by Russia.

Under the deal offered, rebels would hand over medium and heavy weapons and Syrian state institutions would resume work. Displaced families could return with guarantees by Russian military police.

Men who defected from Syria’s armed forces or who did not complete their compulsory service could regularise their status with the regime within six months.

And regime forces would take over the Nasib border crossing with Jordan as well as deploy along the frontier with the Israeli-occupied Golan Heights.

But many residents were worried a deal struck with Russia would only be violated later on, said Daraa activist Omar Hariri.

Since the terms did not include mass population transfers to other opposition-held zones like in previous deals, residents feared the regime would abduct or arrest its opponents in “acts of revenge,” he told AFP. 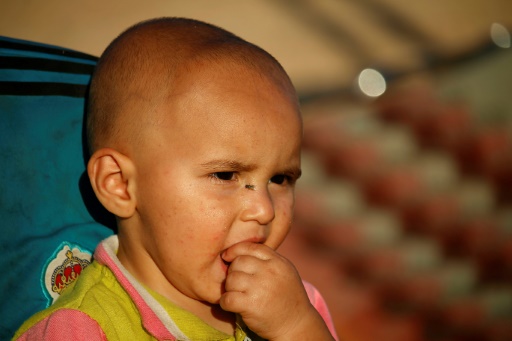 AFP / Mohamad ABAZEED. A displaced Syrian child from the Daraa province fleeing shelling by pro-government forces waits in a makeshift camp to cross the Jordanian border, near the town of Nasib, southern Syria, on July 1, 2018.

“I absolutely do not support reconciliation because the Iranian and Russian militias will come in, wanting to slaughter us all,” he said of the regime allies.

“They won’t leave a single person alive, especially here in Daraa, the cradle of the revolution.”

“The noose is getting tighter and tighter,” he said.

Eight towns fell to regime control on Saturday and another five on Sunday, including the key town of Bosra al-Sham.

It was held by Shabab al-Sunna, one of the south’s most powerful factions, and its willingness to agree to a deal stirred fierce criticism of its leader Ahmad Al-Awdeh.

Rebel supporters repeatedly referred to him as a “traitor” in posts on Twitter.

An opposition source from the south with close knowledge of the talks said Russia’s piecemeal approach to the deals had hamstrung the negotiating committee.

“Its position was weakened by localised, individual deals, Ahmad Al-Awdeh’s individual agreement with the Russians over Bosra al-Sham, and Russia’s successful military advance on the ground,” the source told AFP

Featured Photo: AFP / Mohamad ABAZEED. Displaced Syrians from the Daraa province fleeing shelling by pro-government forces wait in a makeshift camp to cross the Jordanian border, near the town of Nasib, southern Syria.