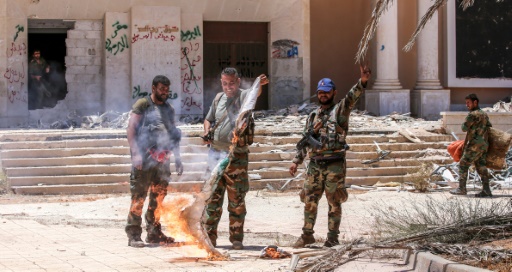 Nassib (Syrie) (AFP) – Syrian army soldiers burned a rebel flag Saturday after they and Russian military police took over the crucial Nassib post on the border with Jordan.

“The government has got its hands on a major economic hub that links Syria with other countries, above all Jordan and the Gulf states,” a jubilant Syrian military source said at the scene.

Nearby other troops flicked victory signs as they relaxed next to a tank decorated with a portrait of President Bashar al-Assad.

Military police from the regime’s vital ally Russia stood holding their guns around a truck bearing their country’s tricolour flag.

After launching a devastating offensive in Syria’s southern region of Daraa on June 19, the forces of Damascus and Moscow were finally in charge of one of their main strategic targets — the frontier crossing with Jordan. 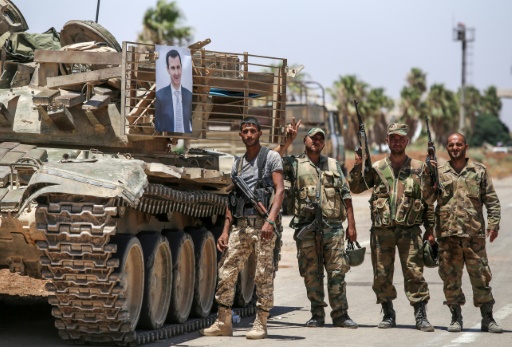 AFP / Youssef KARWASHAN. Syrian government soldiers stand flashing the victory gesture next to a picture of Syrian President Bashar al-Assad hanging on a tank at the Nassib border crossing with Jordan in the southern province of Daraa on July 7, 2018.

Under an agreement announced Friday after talks between rebels and Russia, opposition fighters handed the Nassib post back to government control for the first time in three years.

In that period, the once crucial transit point for goods flowing across the Middle East has been left damaged and desolate.

One of the arches that vehicles crossing the border used to pass under has partially collapsed, with its concrete blocks and metal bars jutting into the air.

Two shipping containers with the word “customs” printed on them in English lay strewn on their sides blocking several lanes for traffic.

Before Syria’s brutal conflict started in 2011, hundreds of trucks made the crossing daily, carrying goods from the country into Jordan.

Despite the destruction, the Syrian government — and businessmen across the border in Jordan — hope the vital trade route will soon be bustling once more.

The territorial gain is the latest victory for Assad, who has scored a string of successes with the backing of Russia and Iran and now dominates some 60 percent of the country. 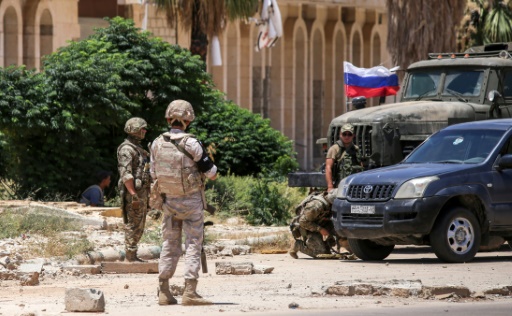 AFP / Youssef KARWASHAN. Members of the Russian military police are seen at the Nassib border crossing with Jordan in the southern province of Daraa on July 7, 2018, after the vital crossing was retaken by Syrian government forces the day before.

In Daraa province — the cradle of the 2011 revolt that sought to topple Assad — ferocious bombardment during the two-week assault eventually forced the rebels to strike a bargain with the Russians.

It means a ceasefire has come into force, presaging disarmament of rebels in the region and an eventual return of Syrian state institutions to the area.

While it represents a key strategic advance by the regime, taking back Nassib appeared to bring a welcome respite for the soldiers on the ground.

“Don’t film me,” said one soldier as he wandered around with flip-flops on his feet.

“This is the first time I’m wearing them. I hadn’t taken my boots off for 20 days.”

Featured Photo: AFP / Youssef KARWASHAN. Syrian government soldiers burn an oppposition flag while flashing the victory gesture at the Nassib border crossing with Jordan in the southern province of Daraa on July 7, 2018.