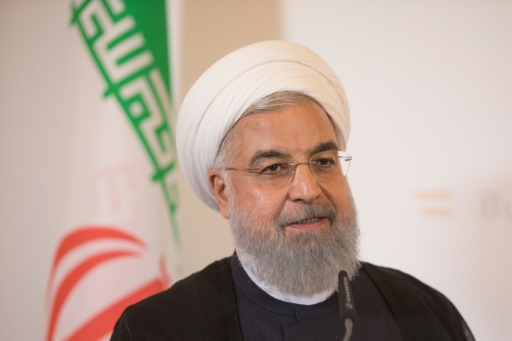 Tehran (AFP) – Frequently a target of attack by hardliners, Iran’s President Hassan Rouhani is benefiting from a sudden surge in support from his former critics, a week after he called for national unity.

The apparent sea-change in conservative rhetoric follows hawkish comments by the president himself following Washington’s unilateral May withdrawal from a landmark 2015 nuclear deal.

Visiting Europe to seek economic guarantees, Rouhani lashed out at Israel in the Swiss capital Bern on Tuesday, saying Iran “sees the Zionist regime as an illegitimate regime”.

And he has questioned the American government’s ability to make good on threats to prevent other countries buying Tehran’s oil.

The latest evidence of the domestic shift came on Wednesday, in a letter by prominent General Qassem Soleimani to the moderately conservative president.

Soleimani — head of the elite Revolutionary Guards’ foreign operations — thanks the president for his “wise and appropriate” words on Israel and the US, in the letter published by Fars news agency.

Rouhani’s remarks were “a source of pride”, wrote the general.

Rouhani is the main Iranian architect of the July 2015 nuclear accord with world powers, under which his country agreed to rein in its nuclear programme in exchange for easing multilateral sanctions which had strangled the economy.

Some Iranians have interpreted Rouhani’s recent hawkish comments as meaning he could be open to blocking the Strait of Hormuz — a threat Tehran has brandished during past bouts of regional tension.

Some 30 percent of all the world’s sea-borne oil exports pass through the strait, which runs from the Gulf into the Indian Ocean.

Conservative Iranian media outlets have thrown their weight behind Rouhani.

“Meeting in the Strait” read a headline in Javan — a daily close to the Revolutionary Guards — along with a picture of the president and General Soleimani shaking hands in front of a map of the Strait of Hormuz.

A photo of Soleimani was splashed across the front page of Sazandegi newspaper with the headline “Unity Sepah-Government” (Sepah is the Farsi acronym for the Revolutionary Guards).

Rouhani, who has sought to open up various economic sectors to private enterprise, has repeatedly criticised the Revolutionary Guards for exerting too tight a grip on Iran’s economy.

Since he first took office in 2013, Rouhani has regularly been attacked by ultra-conservatives.

He was elected for a second four-year term in May 2017, with the support of reformers.

After protests around the New Year in many Iranian cities against economic hardship, they accused Rouhani of abandoning the country’s weakest citizens.

Some have held up America’s withdrawal from the nuclear agreement as proof of the president’s naivety in trusting the West.

As Iran’s rial plunged in value and protests re-ignited, some legislators called in late June for Rouhani to be impeached.

But things changed abruptly after June 27 when he appealed to his opponents for help.

Kayhan is another ultra-conservative newspaper now backing the president.

“We must put to one side our differences because, at present, the national interest and the survival of the nation are at stake,” said an editorial.

But Javan signalled the truce may only be temporary.

“Resisting the enemy and preserving the nation’s independence require us to be together and put our differences to one side until a later date”, wrote editor-in-chief Abdollah Ganji.

Marc Jourdier is the Tehran Bureau Chief for Agence France Presse. He formerly served as bureau chief in Kinshasa and reported from Washington on the US economy.